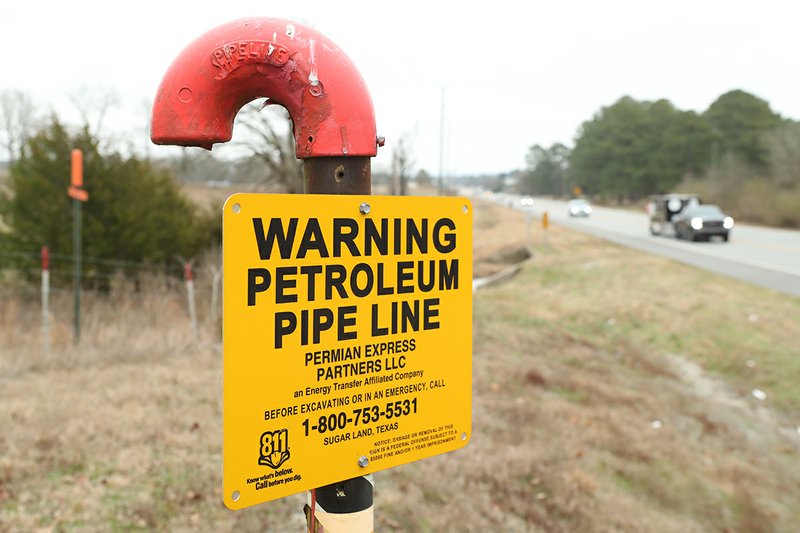 The Sentinel-Record/Richard Rasmussen TESTING UNDERWAY: Motorists drive past a warning sign Tuesday for the Permian Express Pipeline in the 6400 block of Albert Pike Road. The pipeline's owner began testing the inactive line this week.

Inspection and testing of the pipeline that ruptured and released 5,000 barrels of crude oil in a Mayflower subdivision in 2013 is underway in Garland County.

Energy Transfer Partners, the owner of the 859-mile conduit formerly known as Pegasus Pipeline, informed Garland County last week that tests would be conducted Wednesday through Friday. The 20-inch pipeline's 648-mile northern segment from Pakota, Ill., to Corsicana, Texas, has been out of service since the oil spill.

A digital map maintained by the Pipeline and Hazard Materials Safety Administration showed the pipeline, now called Permian Express, runs northeast to southwest across the county, crossing Highway 7 north between Jessieville and Blue Springs and Lake Hamilton near the Treasure Isle Road area. Its path takes it across numerous creeks and streams in the lake's watershed.

"We are performing integrity tests to ascertain the status of the pipeline as it has been inactive since 2013," Amanda Gorgueiro, who works in Energy Transfer Partners' media and public relations department, said in an email. "As with all of our pipelines, these tests are performed per PHMSA regulations. The testing involved the use of a smart pig, which has magnetic sensors to examine the inside of the pipeline.

"At this time, our primary focus is on performing the integrity of the pipeline per PHMSA regulations. All appropriate notifications have been made to landowners within the area."

Gorgueiro did not respond to questions concerning how many property owners were contacted in advance of this week's testing or when the company plans to put the southern section back into service. County Judge Darryl Mahoney said the company told him it will provide more information at the winter meeting of the state's county executives next month.

The Dallas-based energy services company acquired the pipeline in 2016 through a joint venture with Exxon Mobile. The latter's pipeline subsidiary owned and operated the Pegasus line when it ruptured. According to the accident report, a 22-foot section failed in the Conway-to-Jessieville segment, spilling 5,000 barrels of crude oil flowing from Illinois to Texas and causing $57.5 million in property damage.

The report said it took 16 minutes from the time of detection to isolate the failure, with upstream and downstream valves closing off an 18-mile section. An estimated 2,000 barrels collected in ditches and a cove south of Lake Conway. The report said the pipeline is buried 2 feet underground. The northern section was manufactured and installed in 1947.

PHMSA said earlier this week that it has approved the first phase of the remedial work plan required by the corrective action order the agency issued in 2013. Regulators have to approve the plan and other submissions mandated by the CAO before the pipeline can be activated.

Exxon Mobile successfully petitioned the 5th U.S. Circuit Court of Appeals to vacate most of the violations and more than $900,000 of the $2.6 million civil penalty PHMSA assessed in 2015. The agency ruled the energy giant incorrectly determined the pipeline was not susceptible to seam failures and didn't use a testing method capable of detecting the failures, which PHMSA said were foreshadowed by 11 seam failures detected in 2006. The testing regimen mandate is enshrined in the Pipeline Safety Act. The statute requires pipeline operators to create an integrity management program for pipelines affecting high consequence areas.

The court nullified violations PHMSA assessed for failing to consider risk factors and establish and implement an integrity management program.

"The fact that the Mayflower release occurred, while regrettable, does not necessarily mean that Exxon Mobile failed to abide by the pipeline integrity regulations in considering appropriate risk factors," the court's 2017 opinion said. " ... The unfortunate fact of the matter is that, despite adherence to safety guidelines and regulations, oil spills still do occur."

The court affirmed the violation of failing to develop and follow a written integrity management program but instructed PHMSA to reconsider the penalty. The violation was based on Exxon Mobil indicating it had conducted a test for cracks in the affected segment in 2011 when in actuality the test had been delayed.

The court remanded the penalty to PHMSA, ruling that the $783,300 fine should be reconsidered because the violation wasn't a factor in the spill. Exxon Mobil didn't challenge three of the nine violations leveled against it.