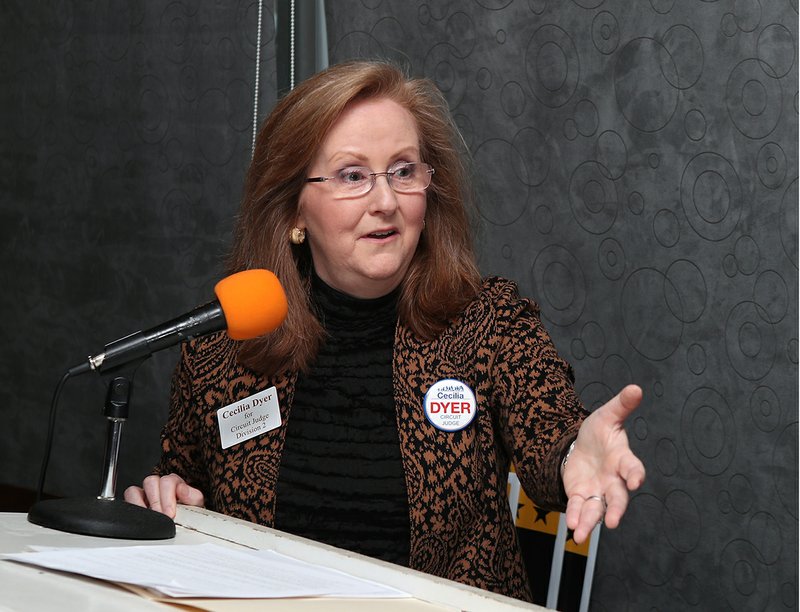 Cecilia Dyer tells the Garland County TEA Party Wednesday that her professional and personal experiences qualify her to preside over Division 2 Circuit Court. She's running against the incumbent, Judge Wade Naramore, and Brian Johnson in the March 3 nonpartisan general election. - Photo by Richard Rasmussen of The Sentinel-Record

She said advocating for children in thousands of legal proceedings and raising her own children into successful adults qualify her to sit on the Division 2 Circuit Court bench, a venue where decisions can have profound effects. Most of the county's juvenile cases are assigned to Division 2.

"Some of the decisions that are made down in juvenile court can literally have a lasting effect on these children that are before the court and the families that are before the court," Dyer told the TEA Party, which has invited candidates running for judicial office in the March 3 nonpartisan general election to address its weekly meeting. "Who would you want sitting up there on that bench making a decision that's going to have such an effect on your children or your grandchildren?

Dyer said having a family law practice for 17 years prior to working as an attorney for the Department of Human Services makes her more versed in juvenile law than her opponents, incumbent Division 2 Judge Wade Naramore and Brian Johnson. She said she has represented the state agency in cases involving parental neglect and abuse in Garland County since 2008.

"In the last 12 years I've appeared in juvenile court for over 4,900 trials and hearings," Dyer, who outpolled Naramore in the May 2014, four-candidate general election race but lost by 5 percentage points in the runoff that November, said. "I'm about to top the 5,000 mark. I know juvenile law and what I'm talking about when it comes to the juvenile code. I have more legal experience than both my opponents combined."

Her advantage in life experience is even more considerable, she said, explaining that Naramore and Johnson, both parents of young children, haven't faced the crucible of raising teens. Seeing how peer culture can adversely shape adolescents and sitting with the worry of trusting unsupervised teens to make good decisions exacts a toll, she said, but also imparts a perspective lost on those uninitiated to the mercurial teenage temperament.

"We all bear many battle scars of our parenting years, and every battle scar we have represents lessons learned and wisdom gained. My experience as a mother and grandmother has made me a much better family law attorney. That kind of experience is what we need on the juvenile bench."

Dyer said she would be able to hear the full spectrum of juvenile cases as Division 2 judge, unlike Naramore, whom a Supreme Court order prohibits from hearing parental neglect and abuse cases.

"Sadly, due to some very tragic circumstances, he cannot fulfill all the duties of a juvenile judge," Dyer said, referring to Naramore's February 2016 arrest on the misdemeanor negligent homicide charge involving the 2015 death of his 18-month-old son, Thomas.

The Arkansas State Crime Lab said environmental hyperthermia was the cause of death, brought on by being left in the back seat of a hot car for seven hours. Naramore testified on the final day of his five-day jury trial in August 2016 that he had lost awareness that Thomas was in the back seat, forgetting to drop the boy off at day care on his way to work.

The jury acquitted Naramore, and the state Supreme Court reinstated him in February 2017 after a yearlong suspension with pay. The reinstatement was conditioned on the county's other three circuit judges filing an amended administrative plan that didn't assign dependency-neglect cases to Naramore.

Those cases were reassigned to Division 3, where Judge Lynn Williams presides.

Each of the state's 28 judicial circuits file administrative plans allocating case assignments among the circuit's judges every two years. The current two-year plan the Supreme Court approved last month for Garland County's circuit assigned all juvenile cases to Naramore, save dependency-neglect cases. Naramore also hears 55% of the county's domestic relations cases and 25% of the probate cases. Division 2 is also the venue for the county's teen court.

Williams continues to hear all of the dependency-neglect cases under the current plan. Delinquency cases involving juveniles charged criminally and family in need of services, or FINS, cases are the other two matters adjudicated in juvenile court. The latter deals with truant and disobedient juveniles.

"In juvenile court, it's serious issues that we're dealing with," Dyer said. "We need someone with the right legal and life experience."

Johnson is scheduled to address the TEA Party next week.