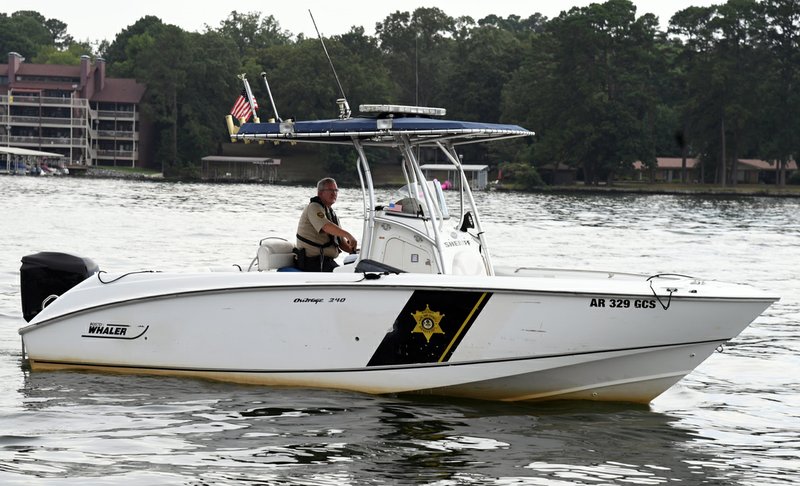 The Garland County Sheriff's Department said it plans to patrol Lake Hamilton this summer with two of its four boats.

Sheriff Mike McCormick told the Garland County Quorum Court in October that funding limitations coupled with the increased cost of maintaining an aging fleet of boats were likely to reduce the marine patrol's presence in 2020.

Flat funding and escalating costs have been a common refrain of the department when presenting the marine patrol's annual budget to county appropriators, but responses it provided earlier this week in relation to a public records request indicated 2019 operational levels would be maintained.

The department said it intends to deploy the 1999 and 2003 Boston Whalers that patrolled the lake last summer. According to maintenance records the department provided, the older model is a 26-foot Outrage and the newer one is a 24-foot Outrage.

The boats, along with a 2004 Baja, were purchased by the now-defunct Lake Hamilton Safe Boating Association, the nonprofit that raised money for the marine patrol prior to dissolving in January 2014. The department sold the 28-foot Baja at the county's surplus auction in July for $9,200, according to information provided by the department.

Maintenance records showed the boat's engines were not running properly in the summer of 2016, requiring the installation of a new fuel injector, spark plugs, fuel pump diaphragm kit, belt and compressor costing $1,948.34.

The department also owns an 18-foot 1982 SeaArk and a 24-foot 2000 Cobia Walkaround. According to maintenance records from the spring of 2016, the department chose not to repair the Cobia's power-train control module after spending more than $2,000 on numerous repairs that failed to get the engine running.

The 2003 Boston Whaler was also having engine problems in 2016. Records showed it wouldn't idle, requiring the replacement of the tracker valve, fuel pump diaphragm and spark plugs for $443.47. The air compressor was replaced for $1,100.47 after the engine still wasn't working properly.

The department has spent more than $36,000 since 2014 on maintaining the marine patrol fleet, according to invoices and purchase orders the department provided. Its submission didn't include invoices from recent years related to winterizing boats.

A December 2018 email Under Sheriff Jason Lawrence sent a justice of the peace said the department has assumed offseason maintenance and storage responsibilities.

"(Gregg Orr Marine) used to service the boats after the season has ended," Lawrence said in the email. "We found that was not cost-effective. Certified marine mechanics do in fact repair the vast majority of the boats when they need repair throughout the year, however, the mechanic that is employed by the Garland County Sheriff's Department, along with the full-time deputy assigned to oversee the division, have been providing end of year service to the boats.

"Additionally, the sheriff's department was able to find funding to provide a covered area at the Garland County Adult Detention Center were the boats are stored in the offseason."

The quorum court allocated $3,701 to parts and repairs in the boating safety fund's 2020 budget, up from close to $1,700 in previous years. The line item makes up about a quarter of the $15,276 budget JPs adopted for the current year. The department said parts and repairs are paid from its general fund-supported budget after money allocated to the boating safety fund is exhausted.

Fines from tickets the patrol issues and revenue from boat registration fees the state remits to counties are the fund's primary support. The quorum court has discussed adding an optional levy to property taxes to support boating safety. It would be similar to the $10 volunteer levy taxpayers can contribute to the county's spay-and-neuter voucher program.

McCormick told JPs last year that adding another boat to the patrol would cost a minimum of $100,000, which would include outfitting and equipping the boat.