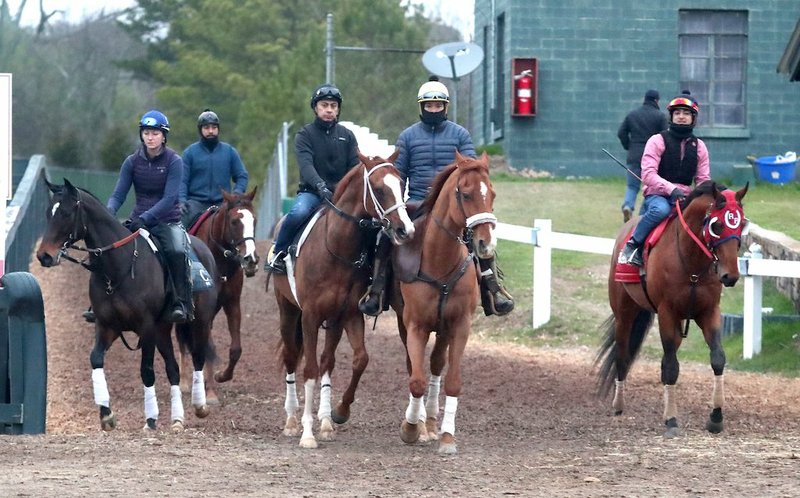 As anyone driving in the 2700 block of Central Avenue can attest, a lot can happen between racing seasons at Oaklawn Park.

Anyone who still calls it a sleepy little track in Arkansas hasn't been keeping up. Those Rip Van Winkles are behind the times and could get left at the starting gate when the 120th season of live racing in Hot Springs begins this week.

The track's longest winter-and-spring dates last year prompted the advertising slogan, "Stay Until May." One tag line this year is "A New Level of Excitement," representing the expansion of a former gaming center to become a full-fledged casino with further amenities ahead. "Pardon Our Construction" reflects all the changes in almost eight months since the last live race at the track.

Casual Oaklawn patrons, ones who come only during the live season, may be astounded when a new decade of racing dawns Friday. In that sense, things also are looking up at Arkansas' largest tourist attraction 20 years after it began a new century with an uncertain future.

An Oaklawn racegoer now can bet on a horse in the grandstand or clubhouse, stop by the casino to roll dice or play blackjack or, soon, wager on the Super Bowl and NCAA basketball tournament in the sports-betting pavilion. How's that for a day at the races?

The Cella family's entertainment complex at 2705 Central Ave. literally has outgrown the moniker Oaklawn Park. Since a multi-phased construction project began last May with the foundation poured for a hotel on the clubhouse turn, it's officially known as Oaklawn Racing Casino Resort. And changing before our eyes.

Unlike some tracks where it's gaming first and racing second, if at all, Oaklawn's core beliefs remain intact. Before his death in 2018, longtime track president Charles J. Cella softened his stance about casino wagering but without compromising on the sport that has formed the focus of the Oaklawn experience since 1904.

Oaklawn, in fact, comes off its greatest decade of live racing, one that four Horses of the Year (Zenyatta, Havre de Grace, American Pharoah and Gun Runner) and many other champions competed (Mitole could make it a fifth HOY when 2019 Eclipse Awards are presented this week).

The Grade 1 Arkansas Derby is more than important than ever on the road to the Triple Crown. Three Kentucky Derby winners in the decade prepped at Oaklawn with American Pharoah, who would become the sport's first Triple Crown winner in 37 years, making the first two starts of his 3-year-old season locally in 2015. For the first time, a third-place Arkansas Derby finisher wore roses at Churchill Downs on the first Saturday in May last year when Churchill Downs runner-up Country House wss elevated to first upon a rival's disqualification.

On one of Oaklawn's greatest non-Derby days, two Grade 1 winners from Hall of Fame trainer Bob Baffert's stable campaigned here on the same day last March in the first Rebel Stakes split into two divisions. Omaha Beach, after nipping previously undefeated champion Game Winner in his half of the Rebel, won the Arkansas Derby and was made program favorite for the Kentucky Derby though forced to miss the Louisville classic.

Heeding Deep Throat's advice to Washington Post reporter Bob Woodward in "All the President's Men," prominent trainers are following the money to Oaklawn -- both for record daily purses and major events. The Arkansas Derby and forerunner Rebel each is worth $1 million as are the track's two marquee events for older horses, Grade 1 Apple Blossom Handicap and Grade 2 Oaklawn Handicap.

Constantly challenging itself for excitement value, Oaklawn offers its first $1 million races after the Arkansas Derby with the Apple Blossom and Oaklawn Handicap both scheduled April 18.

Derby Day, a local tradition since 1936 when the inaugural Arkansas Derby carried a $5,000 purse and Holl Image won, offers three other stakes April 11. The Grade 3 $500,000 Count Fleet Sprint Handicap, the $250,000 Oaklawn Mile and the $200,000 Carousel are undercard items for older horses as the track crowns its 3-year-old champion.

After showing it could be done last year, Oaklawn extends a second season into May with the $200,000 Arkansas Breeders' Championship on Friday and the $300,000 Oaklawn Invitational on Saturday of Kentucky Derby week at Churchill Downs. The Oaklawn Invitational winner receives an automatic berth in the May 16 Preakness at Pimlico Race Course in Baltimore.

The 57-day season has a Monday card on Presidents Day (Feb. 17) but no racing on Easter Sunday (April 12) or on Wednesdays. Several promotions are scheduled including first-Saturday food specials of 50 cents for a corned-beef sandwich and 10 cents for a soft drink.

Call it a new level of excitement (Oaklawn is) at the horseyard in the 2700 block of Central Avenue. Just pardon the construction.