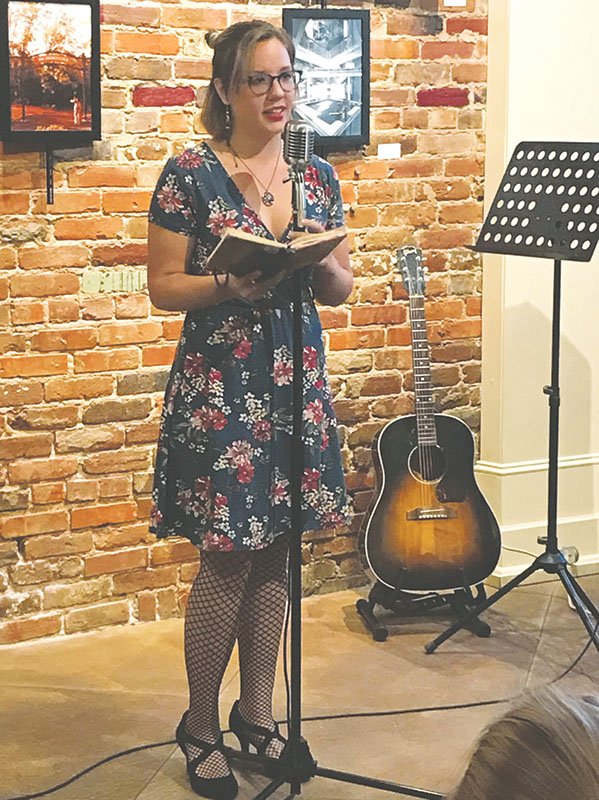 The regular open mic session for all poets will begin at 6:30 p.m. Flocken will begin her feature set at 7:15 p.m., followed by another round of open mic. Admission is free and open to all ages.

A 23-year-old local to Hot Springs, Flocken is a massage practitioner by trade -- Younger Salon being one of the locations that she provides her healing services. "Bodywork has grown to be more than a modality, but a calling. There is nothing in the world that is more fulfilling to me than bringing relief to another person's life. I am constantly impressed by what the human touch is capable of in terms of healing," she said in a news release.

Flocken was away from Hot Springs for four years when she was enlisted in the military. "I was educated by the military in terms of discipline, and while I was only in for four years, I walked away with many lessons of service and honor that I am all too thankful for. I am proud to have coexisted with such a vast collaboration of allies both nationally and internationally. While I was enlisted, I traveled to many places including Germany, and across the U.S. These travels, and all the people I met along the way, are where I draw my inspiration from," she said.

Wednesday Night Poetry has been a part of her life since she was 8 years old, attending with family and friends off and on since then. She began writing poetry of her own as a young teenager. She writes poetry on many topics including romance, motivation, spiritual striving, and overcoming trauma.

As tonight's featured poet, she is bringing awareness to Jackson House.

"Eleanor Klugh Jackson House for Crisis Intervention Services Inc., commonly known as Jackson House, is an interfaith community crisis center which provides short-term emergency assistance for the basic needs -- food, clothing and shelter, and medicine without regard to race, creed, sex or nationality -- and without imposing our values or beliefs upon those they serve. Flocken is doing a food drive tonight at her feature, and also has decided to have all of her 'pass the hat' money to this worthy cause," the release said.

"When the holidays pass, donations tend to drop a great deal at critical places such as this, that take care of our city when no one is looking. The Jackson house has helped my family, and thousands of others, and I can only feel gratitude for the help it continues to share every day," she said.

"Bring canned foods or other nonperishable goods, sweaters, coats, anything you would like to donate to WNP, and all the donations will be delivered to Jackson House," the release said.

"Catherine is a true Hot Springs diamond, a bright light in a dark time. We are honored to showcase her poetry, but more so her example of compassion and heart. Come support her, and bring something to donate to Jackson House," said WNP Host Kai Coggin. Tonight is Flocken's first time to feature at WNP.

This week marks 1,617 consecutive Wednesdays of open mic poetry in downtown Hot Springs since Feb. 1, 1989. For more information about WNP, or to be considered as a featured poet in 2020, email [email protected]