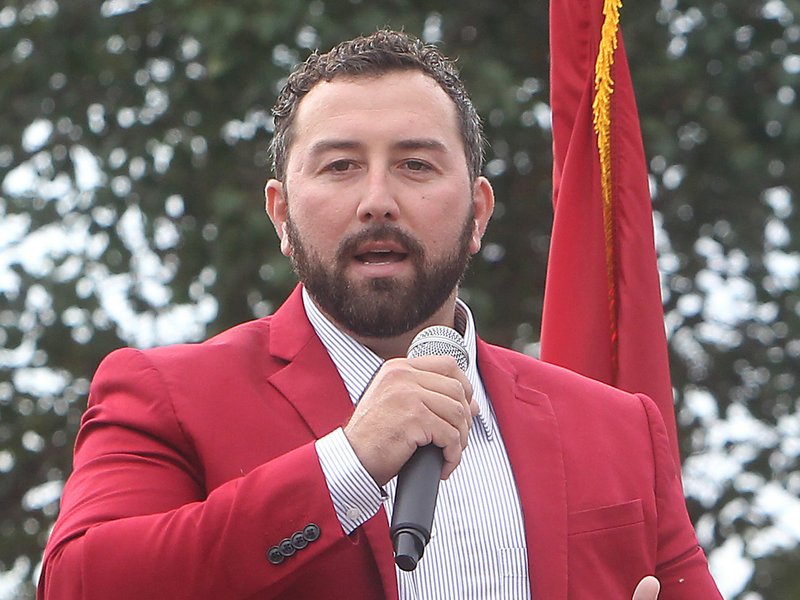 Mountain Pine Mayor Morgan Wiles speaks to a crowd in Mountain Pine in September 2017. - File photo by The Sentinel-Record

Aldermen and Mayor Morgan Wiles have been working to better define executive and legislative functions in the former mill town of about 800 people since Wiles took office last January. He built a 50,000-square-foot manufacturing plant for his window business, Morfe Windows LLC, in Mountain Pine in 2018, putting it on the 389-acre parcel that had sat idle since Weyerhaeuser shuttered the local veneer and plywood plant in 2006.

The council appropriated $200 a month for the mayor's salary, but Wiles said he donated it to the police department the city reconstituted last spring.

"There's really no minimum or maximum hours the mayor should work," Wiles told the council. "I just felt that someone should put on paper for the longevity of the city how many hours should the mayor of this town work."

Wiles said he will post his monthly office hours prior to the council's regular business meetings on the third Monday of the month.

The original version of the resolution included a provision setting minimum work hours for council members, but it was struck from the text when several city lawmakers said the duties of their office don't require the eight hour a month minimum prescribed in the resolution.

A separate item raising aldermen's salary $40 a year was defeated, with Wiles breaking the 4-4 tie and keeping annual compensation at $360.

"My personal opinion is if you're doing this job for money, you're in it for the wrong reasons," he told the council.

A measure allowing aldermen to appoint a proxy to serve in their stead was also defeated.

"I don't see any background where it's allowed by statute," City Attorney Terry Diggs told the council. "But I think it would be helpful one way or another if you decided whether or not it ought to be allowed."

A resolution Wiles told the council he proposed to help aldermen influence whom he can hire was tabled. It would have required council approval before the mayor could hire someone who lives more than one mile beyond the city limits.

While aldermen have expressed concern about their limited role in personnel matters, Wiles has maintained it's the mayor's prerogative to make hiring and firing decisions as the direct contact for city department heads.

"I'm setting this up so the council can have some kind of validity in talking about employees," he told aldermen, explaining that limiting the geographic radius of his hiring pool would give the council more influence over personnel.

Alderman Jonathan Arnold said Wiles could strengthen the council by presenting a budget that gave his office less discretion to allocate funds. Arnold said the 2020 budget the council adopted gave the executive arm of the city too much spending authority, whereas a smaller budget would require Wiles to regularly request appropriations supplemental to the adopted budget.

"You should have the courtesy to say, 'I'm going to hire you, but your employment is determined by next month's meeting,'" he said. "'I'm going to bring it up and tell (the council) I hired you, how much I hired you for, where you live and what I'm going to do with you.'"

Diggs told the council a municipality's legislative arm typically has no administrative role in personnel.

"The council determines job title and salary," he said. "The council in most cities doesn't have the authority to rule on who is hired."