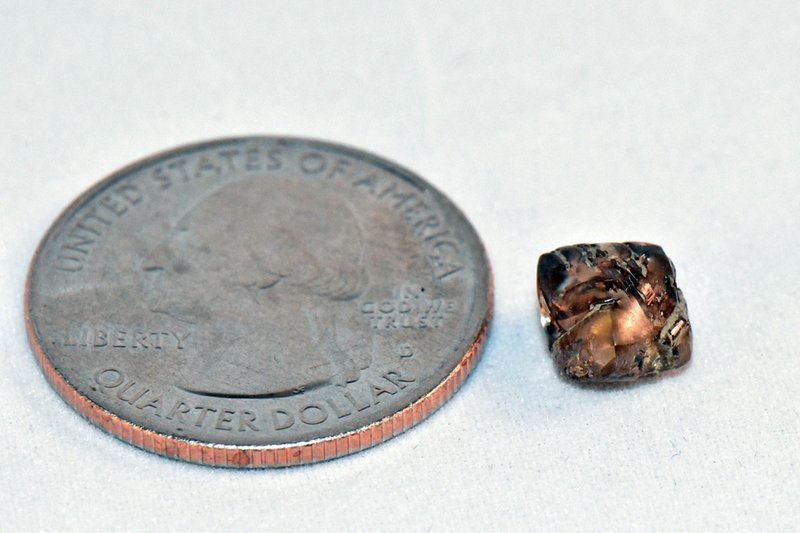 Pat Choate, of Jacksonville, found a 3.29-carat brown diamond she named "Illusive Dream," calling it a dream come true after many years of hard work searching for diamonds. - Submitted photo

Visitors from Arkansas, 36 other states, and one foreign country found 491 diamonds during the year at Crater of Diamonds State Park in Murfreesboro, including 336 white gems, 73 brown, and 82 yellow, a news release said.

The total weight for all diamonds registered last year was 99.14 carats -- 22 carats heavier than all diamonds found in 2018, it said.

The average weight of diamond found last year was around 20 points, or one-fifth of a carat. Though most were found by wet sifting, a method that involves sorting large quantities of gravel by size and weight, about one in every 10 diamonds were found on top of the ground at the park, including many of the year's largest finds, the release said.

Visitors found about one diamond per day in January and February 2019. As visitation picked up in March, so did the number of finds. One hundred and one diamonds had been registered by the first day of spring last year, but only one of these weighed more than a carat. March was the busiest month for park visitation, as well as diamond finds, with 71 diamonds registered during the month, it said.

The rate of diamond finds remained fairly steady through spring and early summer, and heavy summer rains also brought heavier diamonds. By the end of July, park visitors had found 297 diamonds, including 10 weighing at least a carat. On July 24, Josh Lanik, of Hebron, Neb., found the first 2-carat-plus diamond of the year. Lanik found his 2.12-carat brandy-colored gem while surface searching near the West Drain of the park's diamond search area. He named it the "Lanik Family Diamond" in honor of an "unforgettable experience at Arkansas' diamond site," the release said.

Three weeks later, Miranda Hollingshead, of Bogata, Texas, brought her family to the Crater of Diamonds after learning that the park is only a couple hours from her home. Hollingshead was sitting on the northeast side of the diamond search area on Aug. 16, watching a YouTube video about how to find diamonds, when she looked down and saw a 3.72-carat yellow diamond on top of the ground.

"Hollingshead, a fan of superheroes, named her gem the 'Caro Avenger,'" the release said.

To expose unsearched diamond-bearing material and create new opportunities for finds, in early fall the park conducted a trenching project along the south end of the search area. Shortly after the project wrapped up, longtime park visitors John and Pat Choate, of Jacksonville, registered their largest diamond find to date. While searching on Canary Hill in the search area on Oct. 22, Pat Choate found a 3.29-carat brown diamond on the surface of the plowed field. She named her gem the "Illusive Dream," calling it a "dream come true after many years of hard work searching for diamonds."

By the end of last year, visitors had registered 18 diamonds weighing more than a carat at the park.

"While most visitors don't find diamonds their first time here, experiences like these are bound to happen once in a while. It's the anticipation of the next diamond find that makes Crater of Diamonds State Park an exciting place to work at, and an even more exciting place to visit," the release said.

Print Headline: More than 99 carats of Arkansas diamonds found at park in 2019