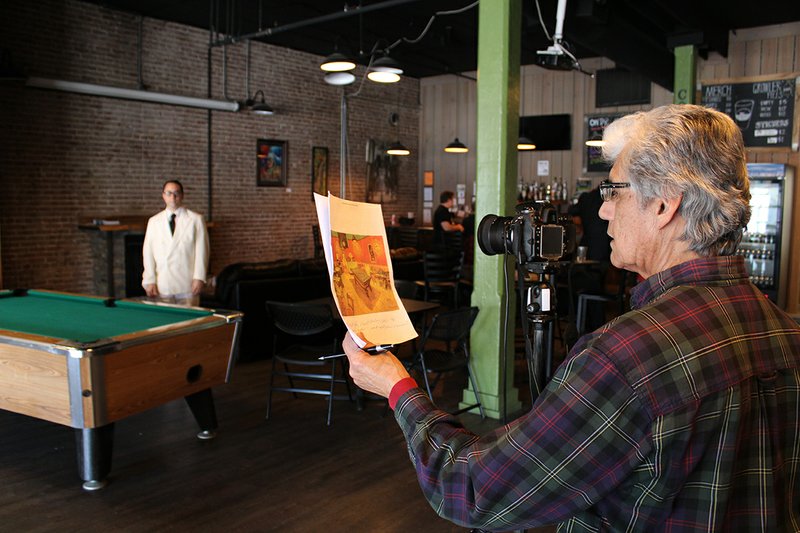 Photographer Eli Vega stages a recreation of Vincent van Gogh's "The Night Cafe" at Core Public House on Jan. 21 with Jason Nickerson-Tinna posing for the photo. This was the 10th of a planned 40-photograph series. - Photo by Tanner Newton of The Sentinel-Record

Local photographer Eli Vega spent over an hour recently converting Core Public House's dining room into a recreation of Vincent van Gogh's "The Night Cafe" as part of what he hopes to be a 40-piece series of photos.

Vega and model Jason Nickerson-Tinna, after studying the original 1888 painting, moved tables and chairs, hung a painting and a clock, and moved the pool table into position at Core on the day of the shoot, Jan. 21. Nickerson-Tinna and fellow models Gavin Collins, Eric Thomas, Hunter Griffin, Dustin Prince and Steve Helms then donned period clothing, and Helms placed wine and beer bottles in the proper spots as they all got to work recreating the exact poses of the six people in the original painting.

This was the 10th painting recreation Vega has made. With a goal of two photos per month, he said he expects the project to take him a year to finish.

Vega moved to Hot Springs late last year from Eureka Springs where this project originated. He said there was an art project there called "Living Windows," where people would stand in windows. "One was a girl with a pearl earring," he said, noting the girl looked very similar to Johannes Vermeer's "Girl with a Pearl Earring," so he snapped a photo of her.

Shortly after that, he happened across another person who looked like a famous painting which became his second photo and a third followed.

"At that time I was just taking pictures, having fun," Vega said, but after moving to Hot Springs the "need to continue this ... took root."

The first one he made in Hot Springs was a recreation of Edward Hopper's "Nighthawks" at The Avenue Restaurant.

While the first three were random moments that coincidentally looked like famous paintings, Vega said each one since then has been specifically chosen.

"I majored in art for three years," Vega said, noting he still has a textbook from his classes called "The History of Art."

"I went through it," he said, looking for the paintings he studied in college. "Not random pictures; they have a memory to me."

Helping Vega bring this project to life are Hot Springs City Manager Bill Burrough, the business development director for The Greater Hot Springs Chamber of Commerce, Shannon LaDuke, Rebecca Clark, who posed for "Nighthawks," and Lyn Cathey. Vega said he sends each of them a picture of what the next painting will be and then asks if they know of an appropriate venue or can suggest possible models.

He said he also asks for props and Burrough offered him a clock that "looks almost identical to (the one in) the painting."

Other supporters of the project include The Hot Springy Dingy gift shop, the Pocket Community Theatre and other members of the community, he said.

Nickerson-Tinna, who served as the owner of the cafe in the recreation, said he met Vega through their church, Unitarian Universalist Church. This is the first time he has posed as a model for a photo.

"It'll be exciting," Nickerson-Tinna said before the shoot. "I'm a fan of Van Gogh, it'll be interesting to be in one of Van Gogh's paintings."

Fellow model Helms said he decided to help with the project because he loves the art scene. "Art is my passion," he said.

Future recreations Vega is planning include James McNeill Whistler's "Arrangement in Grey and Black No. 1" (Whistler's Mother), Henry Ossawa Tanner's "The Banjo Lesson" and Salvador Dali's "Christ of Saint John of the Cross."

When Vega has completed the project, he said intends to make an exhibit out of the paintings to be put in one of the local art galleries, noting this is why he is shooting for 40 paintings.