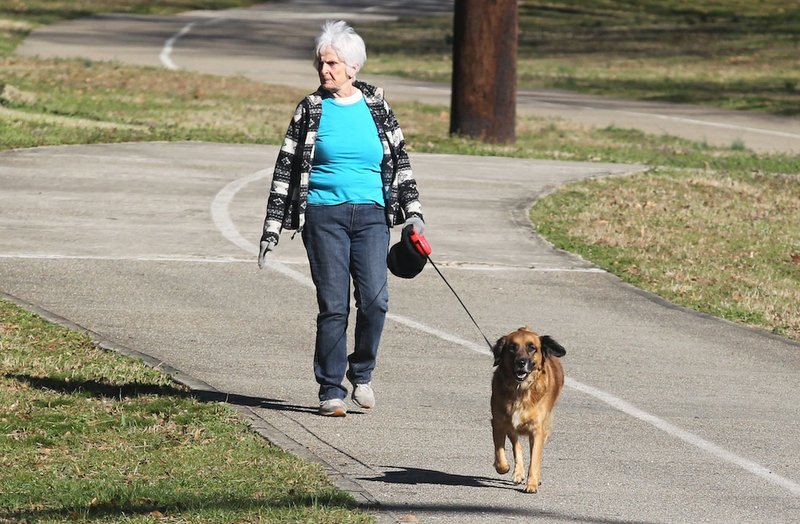 A Hot Springs woman walks her dog on a leash along the Hot Springs Creek Greenway Trail in February. Photo by Richard Rasmussen of The Sentinel-Record

The first incident occurred in November 2019 while a woman was walking her dog on the trail. She encountered a man who was also walking his dog, a pit bull, on the trail without a leash.

"His dog attacked her dog," Lackey said, noting the woman's dog later died from its injuries.

The second incident, Lackey said, which happened last week, involved a man walking his dog near Transportation Depot on the Greenway Trail. Another man with two dogs that were not on leashes was also on the trail. While the two loose dogs didn't actually attack the man or his dog, they did run at them.

"The only area a dog can be off-leash is the dog park," Lackey said, noting dogs must still be on a leash even in the parking lot of the dog park.

Lackey said dogs must be kept in either a fence or be tethered with a chain at a residence.

Those found in violation of the ordinance can face punishment which Lackey said is up to the discretion of the officers. "If someone doesn't know the law ... we'll educate them," he said, noting ignorance of the law is not an excuse.

"We can issue a citation," Lackey said, noting they don't usually physically arrest people for these kinds of incidents. He said people in violation of the ordinance who have a dog that has attacked another dog would likely be given a "citation to go to court."

Lackey said Hot Springs police will be conducting extra patrols around the Greenway Trail, both to enforce the ordinance and other issues.

Those who experience incidents like the one where the dog was attacked should call Animal Services, Lackey said, noting they first learned about the incident where the woman's dog was attacked by reading about it in a letter to the editor in the newspaper.

Animal Services, 501-262-2091, answers calls from the public between 8 a.m. and 5 p.m., but they are on call around the clock. If an incident happens after hours, Lackey said people should call either the Hot Springs Police Department or the Garland County Sheriff's Department. The Animal Services officer will then be contacted by those authorities after hours.