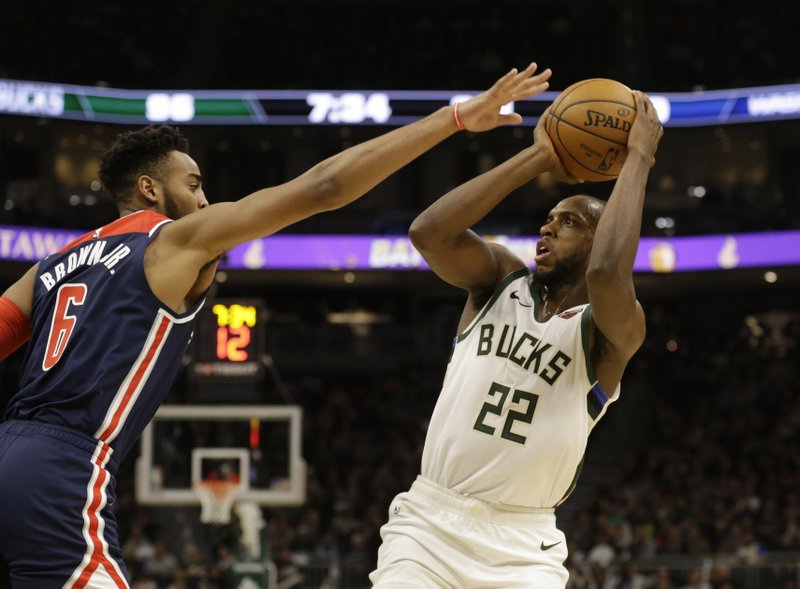 Milwaukee Bucks' Khris Middleton puts up a shot against Washington Wizards' Troy Brown Jr. during during the second half of Tuesday's game in Milwaukee. - Photo by Jeffrey Phelps of The Associated Press

MILWAUKEE -- Khris Middleton scored a career-high 51 points in the absence of injured teammate Giannis Antetokounmpo, leading the Milwaukee Bucks to a 151-131 victory over the Washington Wizards on Tuesday night.

Middleton, hoping to be chosen an All-Star reserve for the second straight year on Thursday, helped the Bucks hold off a second-half Wizards rally. Middleton also had 10 rebounds and six assists.

Milwaukee (41-6) scored a franchise-record 88 points in the first half, finished with its highest total of the season and won its ninth straight game despite the absence of Antetokounmpo, who sat out with a right shoulder injury.

Bradley Beal led the Wizards (15-31) with 47 points, his second straight 40-point game and sixth of the season.

PHILADELPHIA -- Wearing No. 24 in honor of Kobe Bryant, Joel Embiid scored 24 points in his first game in three weeks, leading Philadelphia to the victory.

Embiid and the rest of the Sixers wore No. 24 and No. 8 Bryant jerseys in warmups in honor of the Los Angeles Lakers star, who was killed Sunday in a helicopter crash. Embiid was granted permission from Hall of Famer Bobby Jones to wear the retired No. 24 instead of his usual 21 for his first game since he tore a ligament in a finger in his left hand.

Philadelphia's Ben Simmons had "Mamba Forever" and "RIP Gigi" (for Bryant's daughter, among the nine killed in the crash) on each sneaker and scored 17 points.

MIAMI -- Gordon Hayward had 29 points and nine rebounds, and the Celtics led virtually the entire way.

Goran Dragic led Miami with 23 points and Jimmy Butler scored 20. Bam Adebayo had 16 points and 10 rebounds for the Heat, who lost at home to an Eastern Conference opponent for the first time in 14 games this season.

CLEVELAND -- Zion Williamson scored 14 points -- all inside -- in an uneventful NBA road debut, helping the Pelicans to the victory.

Playing in just his fourth game, Williamson added nine rebounds in 30 minutes, his most as a pro. He didn't do anything spectacular or particularly crowd pleasing, but that hardly mattered to the Pelicans, who are just happy to have the hyped rookie on the floor and healthy.

Collin Sexton scored 24 for the Cavs, who have lost eight of nine. Rookie Kevin Porter Jr. scored 21 points, and Larry Nance Jr. had 17 points and 11 rebounds.

Serge Ibaka had 24 points and 10 rebounds and Pascal Siakam added 24 points as the Raptors won their 10th in a row over Atlanta.

With his ninth assist, a long outlet pass to Terence Davis in the fourth, Lowry moved past Jose Calderon (3,770) on the team's career list.

DALLAS -- Devin Booker scored 20 of his 32 points in the third quarter, Deandre Ayton had a season-high 31 points and the Suns never trailed.

Booker started the scoring in the third before the ball had even been thrown in, making a free throw after the last of three first-half technicals against Dallas was called against Tim Hardaway Jr. after the halftime buzzer.

With the head start from Booker, the Suns outscored the Mavericks 48-22 in the third on their way to surpassing last season's win total of 19 with their fourth victory in the past five road games.

Luka Doncic scored 21 points for the Mavericks. Jalen Brunson and J.J. Barea each had 15.

Ja Morant had 14 points as Memphis led from start to finish. Jaren Jackson Jr. had 10 points and blocked a career-high seven shots.

Denver's Nikola Jokic had 25 points and and 13 rebounds for his 22nd double-double in 28 games. Jerami Grant had 21 points, including 13 in the fourth quarter.

CHARLOTTE, N.C. -- Terry Rozier had 30 points and 10 rebounds, and the Hornets snapped an eight-game losing streak.

Miles Bridges added 15 points in Charlotte's first win since Jan. 4. Willy Hernangomez had 12 points and 10 rebounds for his first double-double of the season. Cody Zeller finished with 10 points and 10 boards.

The Hornets trailed by many as 13 points in the first half.