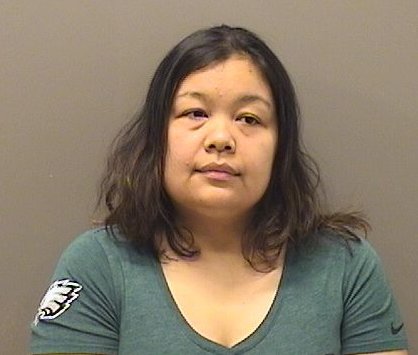 The wife of a food truck operator was arrested Tuesday evening on a felony assault charge after allegedly attacking her husband with a large meat cleaver inside his truck.

Veronica Astrid, 33, who lists a Mason Street address, was taken into custody shortly before 7 p.m. at the 420 Eats Food Truck Court, 420 Malvern Ave., and charged with aggravated assault on a family or household member, punishable by up to six years in prison.

Astrid was being held in lieu of $2,500 bond and was set to appear Wednesday in Garland County District Court.

According to the probable cause affidavit, shortly after 6 p.m. Tuesday, Hot Springs police Officers Jason Greene and Jamie Ugartechea responded to the food truck court involving a possible assault after the husband called to report his wife, identified as Astrid, was "acting crazy" and threatening him with a knife.

Upon arrival, officers located Astrid, who matched the description given, inside the Rock 'N' Roll Hibachi truck and detained her. They spoke to her husband and a female employee who both stated Astrid and the victim had been in an argument inside the truck that turned into a physical confrontation with a deadly weapon.

The husband said he was cornered in the front of the truck after Astrid picked up a large meat cleaver. He said she swung the cleaver at him, narrowly missing him and striking the side of the refrigerator.

Officers noted there was damage to the cleaver and refrigerator consistent with "a forceful impact." The husband said he was able to escape and run from the truck with his employee's help until officers arrived.

The affidavit notes there was a similar incident where the victim reported his wife assaulting him, but court records don't show any prior criminal charges filed against Astrid.