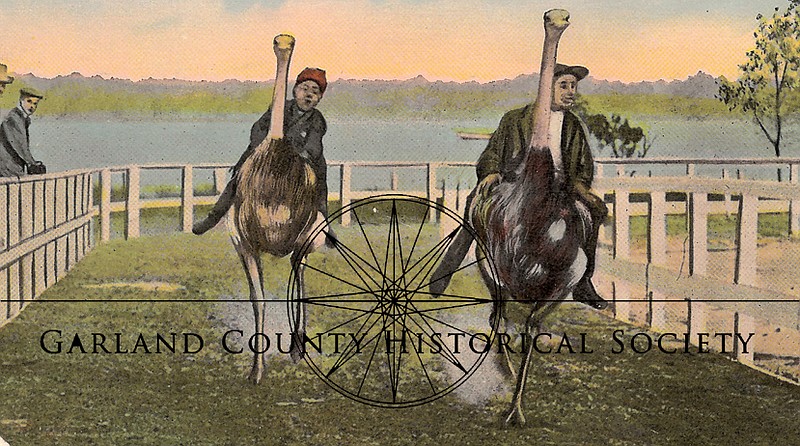 Jockeys vie for the lead on this postcard. - Photo courtesy of the Garland County Historical Society

“There was a time when Hot Springs always knew where to find a feather to put in its cap,” a reporter once wrote.  That place was the Ostrich Farm,  a source of great fun and beautiful plumes for fifty-three years.

In 1900 Thomas Cockburn created the Ostrich Farm on seven acres on upper Whittington Avenue with 200 birds he brought here on three railroad cars.  Eventually the farm was home to 375 birds.  People flocked to the farm to watch Sunday afternoon ostrich races on a quarter-mile track (no betting allowed!).  Jockeys perched on crowd favorites like Whirlwind, Teddy Roosevelt, Carrie Nation, and the most famous, Black Diamond.  The nine-foot-tall, 300-pound Black Diamond was said to do the quarter mile in twenty-four seconds.

Black Diamond and other trained birds were familiar sights on the streets of Hot Springs: “A newcomer is astonished at the strange spectacle of a huge ostrich, harnessed and hitched to a buggy, gaily drawing a couple through the streets on a pleasure jaunt.”  Ostrich races were popular attractions at the Arkansas State Fairs held at Oaklawn Park from 1906-1914. In one unforgettable state fair contest, Black Diamond, harnessed to a light-weight sulky, vied against a race horse pulling a sulky driven by a professional driver. To the joy of the crowd, the ostrich came in a bill-length ahead of the horse.  Sadly, in 1924, Black Diamond died after being attacked by younger birds at the farm. He merited a long obituary in the local paper, which called him “the most famous ostrich on the American continent.”

Cockburn did a thriving business showing his ostriches to tourists and residents, many of whom had their photographs taken with the birds.  He also profited from selling ostrich feathers for hats and other accessories. The feathers were graded as to length, size, and quality, and then the best were saved to sell at the farm while the inferior were shipped to market. The most valuable were males’ plumes of black and white.  Catalogs  featured black or white Amazon plumes, demi-plumes, Prince of Wales Tips in bunches of three, white Knight Templar plumes, pom-poms, and boa plumes.  Cockburn sold beaded hair ornaments with feathers, ostrich and down fans, boas, opera wraps, stoles, and carriage wraps. Cockburn even turned the plucking of the birds (who could be harvested every nine months) into a tourist draw.

In the early 1920s, the demand for ostrich feathers began to wane, and the number of birds at the farm slowly dwindled. After Thomas Cockburn died in 1930, the farm was carried on by his widow and his son, Eddie. In 1944, Eddie changed the farm to the Hot Springs Ostrich and Wild Animal Farm and stocked it with lions, leopards, bears, and other animals. But in 1953, it closed its doors. The six remaining ostriches were sold to the Birmingham Zoo.

Now old photographs and faded newspaper articles are the only record of the time when ostriches were a symbol of the fun and excitement found in Hot Springs.