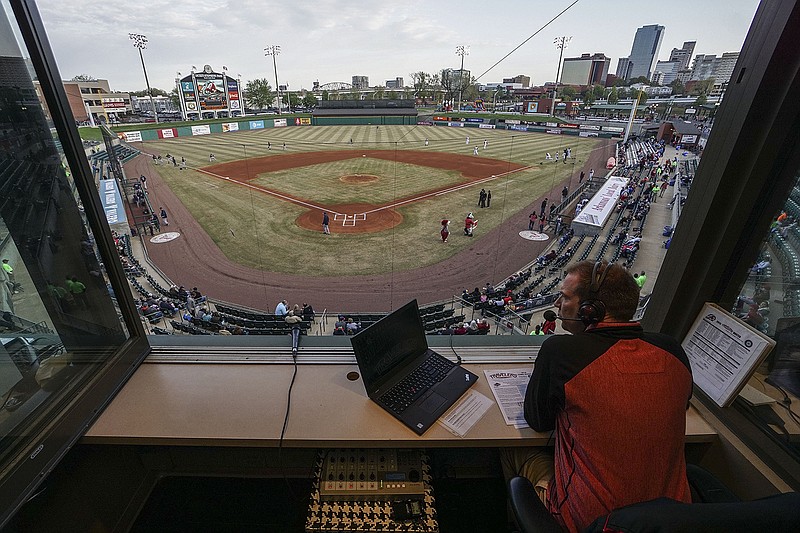 Arkansas Travelers radio broadcaster Steven Davis looks out over the field at Dickey-Stephens Park before the Travelers' April 5, 2018 season opener. Davis will not have the chance to do that this year after Tuesday's announcement that all minor-league baseball has been canceled because of the coronavirus pandemic. - Photo by Mitchell Pe Masilun of Arkansas Democrat-Gazette

Minor League Baseball made the official announcement Tuesday afternoon, canceling the 2020 season amid the coronavirus pandemic. That means fans will have to wait until 2021 for the Class AA affiliate of the Kansas City Royals to return to Arvest Ballpark.

"It's disappointing," Cole said. "But the finality makes it to where you can make peace with it and figure out what comes next.

"Working in the industry, you're thinking this is gonna be the outcome so you've had a little time to process it. But it still shakes you a little bit, absolutely no season. I can't wait for the day next year when we can get our fans back in here safely and we get to see everyone again and see some great baseball on the field."

The same news hit the Arkansas Travelers on Tuesday in North Little Rock. Both the Travs and the Naturals are members of the Texas League.

"When 4 p.m. hit and Minor League Baseball announced the news and we sent out a release, I said, 'It's real now,' " said Paul Allen, the Travelers' general manager. "It's kind of strange. The Travs are a big part of the community here.

"But, this pandemic, it's not just a local or a regional thing. It's a worldwide thing. Everybody understands it. It would have been a logistical nightmare for Minor League Baseball to have teams in 160 communities travel all over the country."

This is the first time since 1962 that the Travelers, who were founded in 1901, will not play a baseball season and only the third time since 1915. The franchise had played in the Southern Association until 1961, then became the Philadelphia Phillies' Class AAA affiliate in the International League in 1963. Then, in 1966, the Travs moved to the Class AA Texas League, where they have been since.

However, Major League Baseball is on as players report for an abbreviated spring training today. Each team's pool of 60 players was announced Sunday.

The 60-game season is scheduled to start on July 23 or 24. Active rosters will be 30 players during the first two weeks of the season, then reduced to 28 during the second two weeks and finally to 26 after that. There will also be a 30-member taxi squad. Up to three players from the taxi squad can travel with a team to a game, and one of the three must be a catcher.

Some teams have chosen to have rosters split among two sites. For instance, St. Louis has announced Hammons Field, the home of the Texas League's Springfield Cardinals, will be utilized as a workout site for the Cardinals' taxi squad. The Royals have decided to initially have all 60 players work out at Kauffman Stadium in Kansas City.

Cole said he let the Royals know that Arvest Ballpark is available as a potential site for their taxi squad.

"The ball's in Kansas City's court," Cole said. "But we told them we'd support them in any way they needed. If they need it, the facility and field are ready."

The Travs are in good financial shape, Allen said. All 23 full-time employees will be paid through Dec. 31, and no employee has been furloughed or laid off.

However, the Naturals furloughed an unknown number of employees in early June, according to an announcement from team owners. Cole would not comment specifically about the employees' status.

"We are committed to our employees for the long term and evaluating the next steps along with everything else," Cole said.

Single-game tickets will be refunded through the Travs' online ticketing system, ticketreturn.com, Allen said. He said refunds should be automatically credited to ticket holders' accounts within a week. Season-ticket holders will receive letters from the Travs about refunds.

Refunds or credits have been issued based off Naturals fans' preferences, Cole said. Naturals fans with questions can email [email protected]

"We've communicated individually with everyone the last few weeks," Cole said. "We knew it was a possibility, so we jumped ahead."

It's also possible Arvest Ballpark could host some other events, Cole said.

"We've definitely talked about some socially distanced events," Cole said. "They've kinda been on the back burner, but we'll likely evaluate our options this week and next. Anything we would be doing would be small-scale events. The state mandate right now is under 100 people."

Allen said the Travs are hosting a disc golf event at Dickey-Stephens Park on July 18-19, in part to help keep the stadium operating during the pandemic. He added that he hopes the ballpark can host youth league baseball tournaments, pending Arkansas Department of Health guidelines.