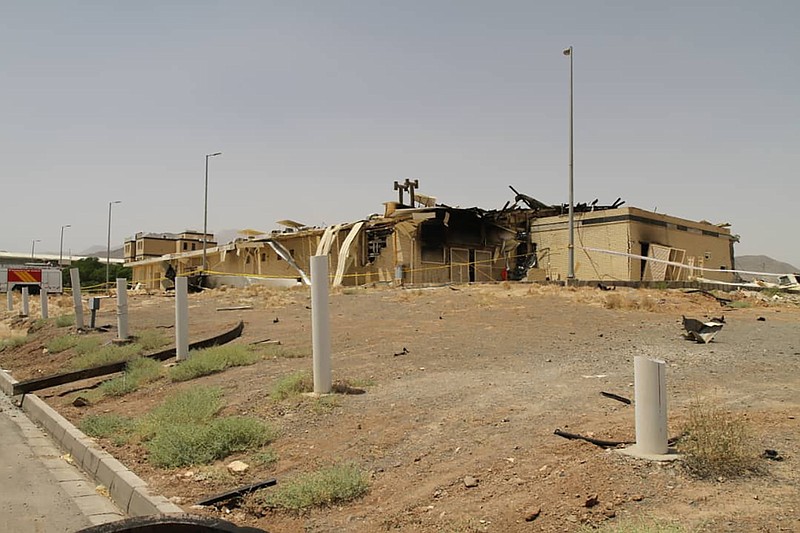 DUBAI, United Arab Emirates -- A fire and an explosion struck a centrifuge production plant above Iran's underground Natanz nuclear enrichment facility early Thursday, analysts said, one of the most-tightly guarded sites in all of the Islamic Republic after earlier acts of sabotage there.

The Atomic Energy Organization of Iran sought to downplay the fire, calling it an "incident" that only affected an under-construction "industrial shed," spokesman Behrouz Kamalvandi said. However, both Kamalvandi and Iranian nuclear chief Ali Akbar Salehi rushed after the fire to Natanz, a facility earlier targeted by the Stuxnet computer virus and built underground to withstand enemy airstrikes.

The fire threatened to rekindle wider tensions across the Middle East, similar to the escalation in January after a U.S. drone strike killed a top Iranian general in Baghdad and Tehran launched a retaliatory ballistic missile attack targeting American forces in Iraq.

While offering no cause for Thursday's blaze, Iran's state-run IRNA news agency published a commentary addressing the possibility of sabotage by enemy nations such as Israel and the U.S. following other recent explosions in the country.

The fire began around 2 a.m. local time in the northwest corner of the Natanz compound in Iran's central Isfahan province, according to data collected by a U.S. National Oceanic and Atmospheric Administration satellite that tracks fires from space.

Images later released by Iranian state media show a two-story brick building with scorch marks and its roof apparently destroyed. Debris on the ground and a door that looked blown off its hinges suggested an explosion accompanied the blaze.

"There are physical and financial damages and we are investigating to assess," Kamalvandi told Iranian state television. "Furthermore, there has been no interruption in the work of the enrichment site. Thank God, the site is continuing its work as before."

In Washington, the State Department said that U.S. officials were "monitoring reports of a fire at an Iranian nuclear facility."

"This incident serves as another reminder of how the Iranian regime continues to prioritize its misguided nuclear program to the detriment of the Iranian people's needs," it said.

The site of the fire corresponds to a newly opened centrifuge production facility, said Fabian Hinz, a researcher at the James Martin Center for Nonproliferation Studies at the Middlebury Institute of International Studies in Monterey, California.

Hinz said he relied on satellite images and a state TV program on the facility to locate the building, which sits in Natanz's northwest corner.

David Albright of the Institute for Science and International Security similarly said the fire struck the production facility. His institute previously wrote a report on the new plant, identifying it from satellite pictures while it was under construction and later built.

Iranian nuclear officials did not respond to a request for comment about the analysts' comments. However, any damage to the facility would be a major setback, said Hinz, who called the fire "very, very suspicious."

Natanz, also known as the Pilot Fuel Enrichment Plant, is among the sites now monitored by the International Atomic Energy Agency after Iran's 2015 nuclear deal with world powers. That deal saw Iran agree to limit its uranium enrichment in exchange for the lifting of economic sanctions.

The IAEA said in a statement it was aware of reports of the fire. "We currently anticipate no impact on the IAEA's safeguards verification activities," the Vienna-based agency said.

Natanz became a flashpoint for Western fears about Iran's nuclear program in 2002, when satellite photos showed Iran building an underground facility at the site, some 200 kilometers (125 miles) south of the capital, Tehran. In 2003, the IAEA visited Natanz, which Iran said would house centrifuges for its nuclear program, buried under some 7.6 meters (25 feet) of concrete.

Natanz today hosts the country's main uranium enrichment facility. In its long underground halls, centrifuges rapidly spin uranium hexafluoride gas to enrich uranium. Currently, the IAEA says Iran enriches uranium to about 4.5% purity -- above the terms of the nuclear deal but far below weapons-grade levels of 90%. Workers there also have conducted tests on advanced centrifuges, according to the IAEA.

The U.S. under President Donald Trump unilaterally withdrew from the nuclear deal in May 2018, setting up months of tensions between Tehran and Washington. Iran now is breaking all the production limits set by the deal, but still allows IAEA inspectors and cameras to watch its nuclear sites.

Natanz remains of particular concern to Tehran as it has been targeted for sabotage before. The Stuxnet malware, widely believed to be an American and Israeli creation, disrupted and destroyed centrifuges at Natanz amid the height of Western concerns over Iran's nuclear program.

Satellite photos show an explosion last Friday that rattled Iran's capital came from an area in its eastern mountains that analysts believe hides an underground tunnel system and missile production sites. Iran has blamed the blast on a gas leak in what it describes a "public area."

Another explosion from a gas leak at a medical clinic in northern Tehran killed 19 people Tuesday.

Yoel Guzansky, a senior fellow at Israel's Institute for National Security Studies and former Iran analyst for the prime minister's office, said he didn't know if there was an active sabotage campaign targeting Tehran. However, he said the series of explosions in Iran feel like "more than a coincidence."

"Theoretically speaking, Israel, the U.S. and others have an interest to stop this Iran nuclear clock or at least show Iran there's a price in going that way," he said. "If Iran won't stop, we might see more accidents in Iran."

Late Thursday, the BBC's Persian service said it received an email prior to the announcement of the Natanz fire from a group identifying itself as the Cheetahs of the Homeland, claiming responsibility for an attack on the centrifuge production facility at Natanz. This group, which claimed to be dissident members of Iran's security forces, had never been heard of before by Iran experts and the claim could not be immediately authenticated by the AP. 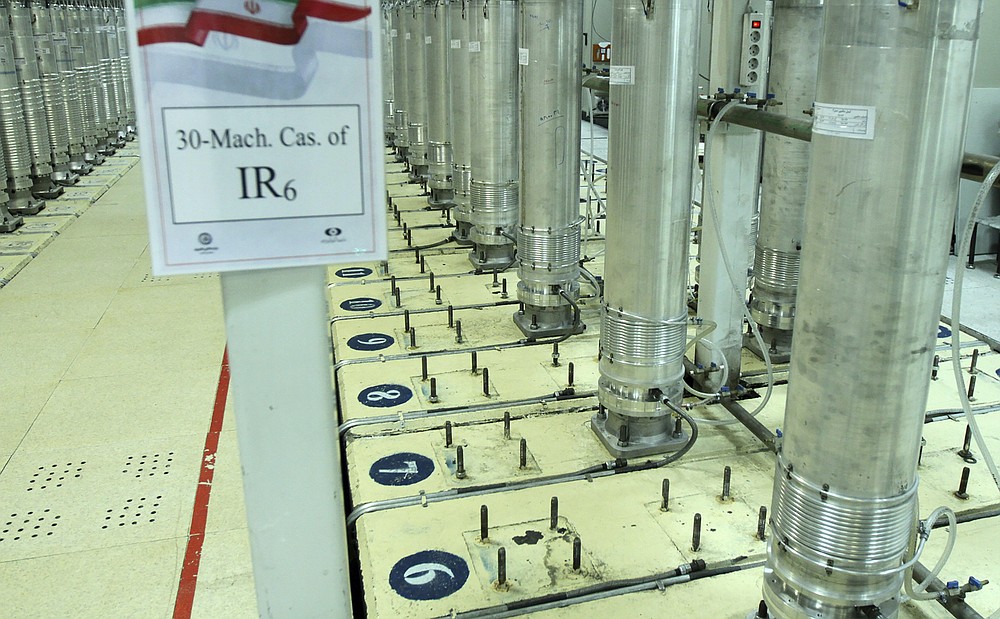 This photo released Nov. 5, 2019, by the Atomic Energy Organization of Iran, shows centrifuge machines in the Natanz uranium enrichment facility in central Iran. Behrouz Kamalvandi, a spokesman in a report published Thursday, July 2, 2020 by the state-run IRNA news agency, said an “incident” has damaged an under-construction building near Iran’s Natanz nuclear site, but there was no damage to its centrifuge facility. Kamalvandi said authorities were investigating what happened. (Atomic Energy Organization of Iran via AP, File)