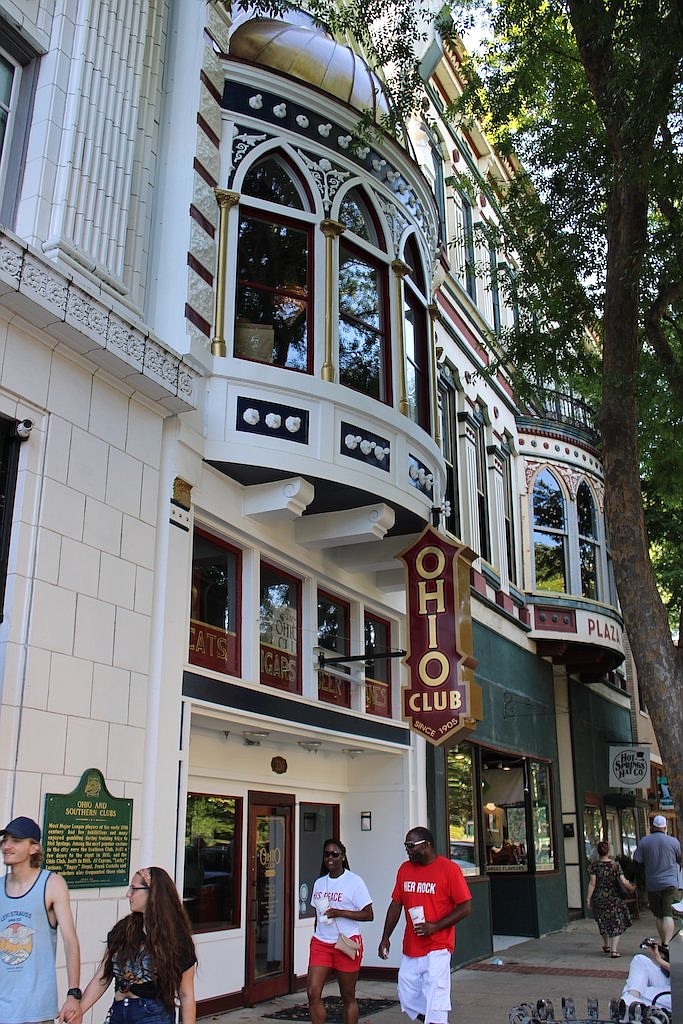 People walk past the Ohio Club on Saturday, June 6. - Photo by Tanner Newton of The Sentinel-Record

Mike Pettey, owner of the Ohio Club, resigned his position on the Hot Springs Advertising and Promotion Commission Friday morning.

Pettey was faced with calls to resign on social media this week after a complaint filed by his wife, Dona, with the Arkansas Department of Health against four local bars for allegedly violating COVID-19 guidelines surfaced online.

A statement posted on Mike Pettey's Facebook page on Friday morning said "I would also like to apologize for any ill will this may have caused. I echo her statement exactly.

"In order to not bring any ill will towards Hot Springs and the Advertising and Promotion Commission, I resigned my position this morning. Again, I’m truly sorry."

Mike Pettey, owner of the Ohio Club, was faced with calls to resign from the Hot Springs Advertising and Promotion Commission on social media this week after a complaint filed by his wife, Dona, with the Arkansas Department of Health against four local bars for allegedly violating COVID-19 guidelines surfaced online.

A copy of the complaint, which was posted this week on Facebook, is dated June 26. Dona Pettey is listed as the complainant. It names four businesses, and states under a section called "details" that "They are having bands and afraid they are not following social distancing and mask rule."

An Arkansas Department of Health representative said Thursday the department called the establishments to readvise them on the state's directives regarding COVID-19, and has closed the complaints.

One social media post this week called the accusations "unwarranted and unsubstantiated," based on "hearsay."

Another post, which included an electronic version of the complaint, drew over 500 comments, including calls for Pettey to resign.

"In an effort to be vigilant, I rushed to judgment, overreacted, and overstepped," Dona Pettey said in an email to The Sentinel-Record on Thursday. "I truly believe that Hot Springs restaurateurs and bar owners/operators have stepped up to address the challenges presented by COVID-19 and are doing their best to keep patrons and staff safe and healthy. My actions were my own and I sincerely apologize."

The ad commission administers the collection and expenditure of the city's 3% tax on prepared food and lodging for the purpose of promoting Hot Springs, according to cityhs.net.

Commission Chairman Elizabeth Farris said Thursday she was unaware some people were calling for Pettey to step down, but she has not yet talked with him herself involving the matter.

"To my knowledge, this just came up yesterday (Wednesday), or yesterday's the first I've heard about it. We're not very far down the road gathering facts," Farris said.

She said there is no special meeting planned with the commission to discuss the matter at this time, but they are taking it "seriously."

"In my opinion, these are tough times and our local hospitality (industry) seems to me to be working very hard to follow the directive set out by the governor," Farris said. "I don't know about the cases she was talking about; I wasn't there and I would just be guessing what her motivation was."

She added that the commission is designed to have different areas of the hospitality industry represented, and she has certain expectations for these representatives.

"I like to think the person representing the hotels or the restaurants, that the other restaurant owners feel comfortable coming to them and talking to them about issues that come up," she said. "In the real world, there is a lot of competition because that's part of free enterprise or part of the industry, but I like to think that the people who represent the various aspects are open to input and work hard with their particular section of the industry."

The next regularly scheduled ad commission meeting is Aug. 24.