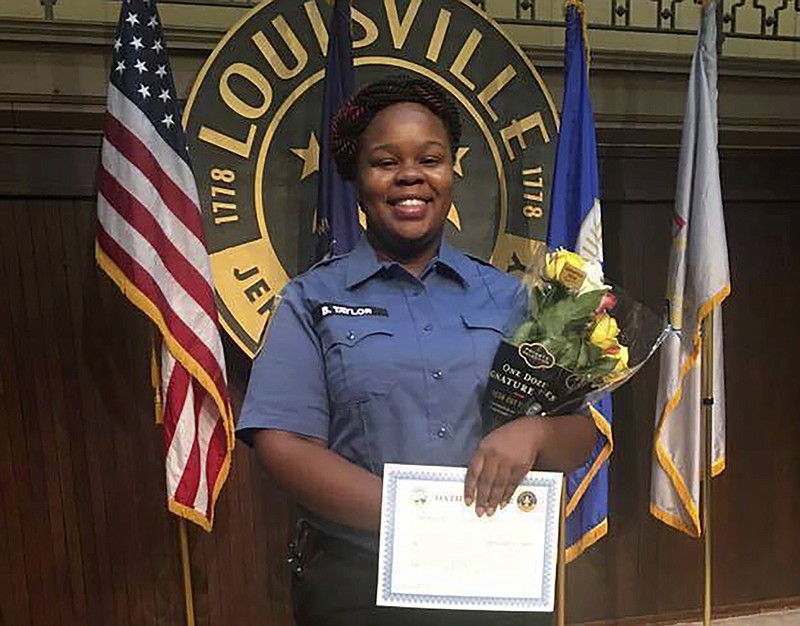 This undated photo provided by Taylor family attorney Sam Aguiar shows Breonna Taylor in Louisville, Ky. Three months after plainclothes detectives serving a warrant busted into Tylor's apartment on March 13, 2020, and shot the 26-year-old Black woman to death, only one of the three officers who opened fire has lost his job. Calls for action against the officers have gotten louder during a national reckoning over racism and police brutality following George Floyd's death in Minneapolis. (Photo provided by Taylor family attorney Sam Aguiar via AP)

LOUISVILLE, Ky. -- Louisville police officers who fatally shot Breonna Taylor while serving a warrant were told she should be home alone because the main target of the narcotics investigation was elsewhere, according to an interview with one of the detectives who served the warrant.

Taylor was shot eight times after officers used a battering ram to knock down her door and fired into the apartment after midnight March 13. One officer was shot by Taylor's boyfriend, Kenneth Walker, who said he thought an intruder was breaking into the home.

The slaying set off weeks of protests, policy changes and a call for the officers who shot Taylor to be criminally charged. Global protests on behalf of Taylor, George Floyd in Minnesota and others have been part of national reckoning over racism and police brutality.

Sgt. Johnathan Mattingly, who was shot in the leg by Walker, spoke to Louisville Police internal investigators about two weeks after the raid. NBC News obtained the interview with Mattingly and another with Walker and released them Thursday. Several key parts of the interviews were played for the public in May when an attempted murder charge against Walker was dropped.

Mattingly said ahead of the raid officers were told Taylor's ground floor apartment was a "soft target" and Taylor "should be there alone, because they knew where their target was and I guess they thought that he was her only boyfriend or only acquaintance." Police were conducting a wide-ranging drug investigation that night.

That target was an alleged drug dealer named Jamarcus Glover, who was arrested on trafficking charges the same night 10 miles (16 kilometers) away on a separate warrant. Taylor had a previous relationship with Glover.

Earlier this week, lawyers for Taylor's mother filed an amended civil lawsuit that alleged police initially called off the warrant search at Taylor's apartment but then went ahead with it to attempt to locate other drug suspects that had no connection to Taylor. Glover had already been apprehended, the lawsuit said.

Mattingly told investigators in the interview recording that officers briefed on the raid were told Glover had packages sent to her apartment in her name.

Taylor "possibly held dope for him, received the packages and held his money," Mattingly said he was told of Taylor's involvement. No drugs were found at Taylor's home.

Police had secured a "no-knock" warrant for Taylor's apartment, but both Walker and Mattingly confirmed that police knocked on Taylor's door. The warrants have since been banned by a Louisville ordinance named for Taylor. State legislators on Thursday were also discussing a bill for a statewide ban of the controversial warrants. The bill would be introduced in January.

Mattingly told investigators officers knocked for about 45 seconds to a minute before using the ram. He entered the home after the door was breached and saw two people, one with a gun, he said.

It was Walker, who moments earlier was lying in bed with Taylor and watching a movie, Walker told investigators in a 90-minute interview.

"I'm trying to protect her, she didn't have a gun," Walker said of Taylor. Walker said he fired one shot toward the ground just as the door was being bashed in. That bullet hit Mattingly in the left thigh. Mattingly then fired about six shots, he said, and then scooted himself out of the apartment.

Mattingly and another Louisville officer, Myles Cosgrove, were placed on administrative leave after the shooting. Another officer who was at the scene, Brett Hankison, has been fired for violating use of force procedures, for "blindly" firing 10 shots into the home, according to police.

Mattingly said Hankison "was a little worked up" that night, and pointed his gun at a neighbor who was yelling at the officers.

Walker spoke to investigators just hours after Taylor was shot, and without an attorney present, according to the interview. Walker said on his way to the interview, riding in a police car, the car stopped for another person who told Walker there was a "misunderstanding."

Walker said the man, driving a silver SUV, told him: "I just wanted to let you know right now ... we had a misunderstanding."

"It seems like to me they realized they were at the wrong place," Walker said. Attorneys for Taylor's family have argued that police had no cause to go search her house.

Mattingly said the bullet hit his femoral artery, and he was undergoing physical therapy. He spoke to investigators for about 40 minutes with his attorney in the room. 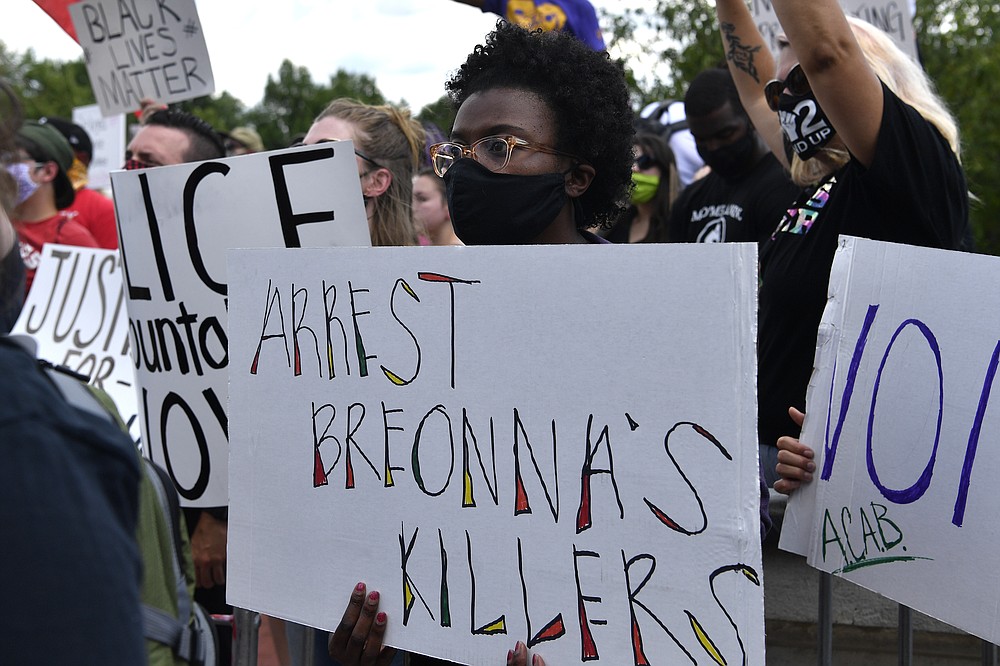 A woman holds up a sign during a rally in memory of Breonna Taylor on the steps of the Kentucky State Capitol in Frankfort, Ky., Thursday, June 25, 2020. The rally was held to demand justice in the death of Taylor who was killed in her apartment by members of the Louisville Metro Police Department on March 13, 2020. (AP Photo/Timothy D. Easley) 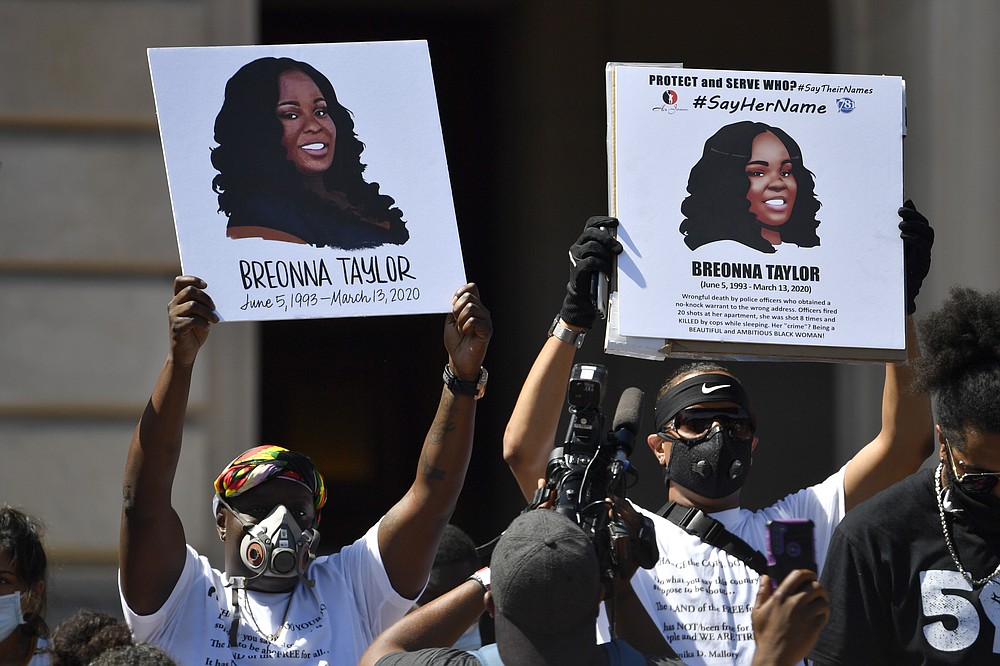 Signs are held up showing Breonna Taylor during a rally in her honor on the steps of the Kentucky State Capitol in Frankfort, Ky., Thursday, June 25, 2020. The rally was held to demand justice in the death of Taylor who was killed in her apartment by members of the Louisville Metro Police Department on March 13, 2020. (AP Photo/Timothy D. Easley)