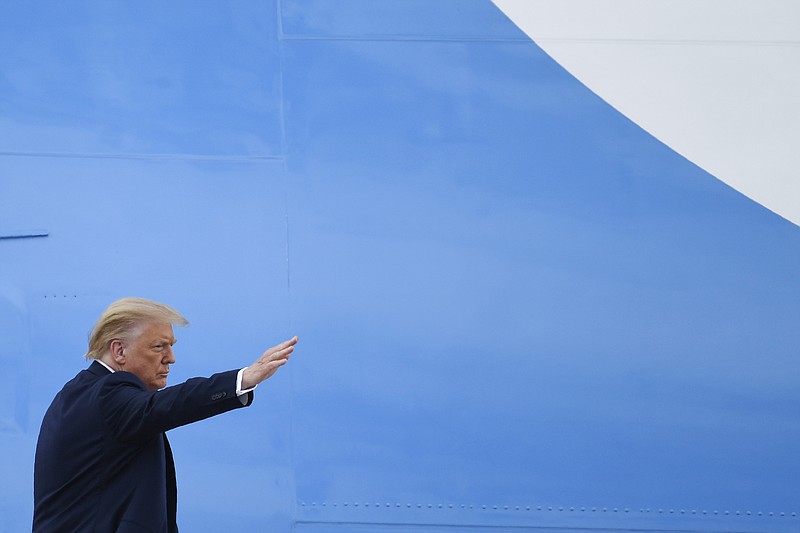 President Donald Trump waves from the top of the steps of Air Force One at Andrews Air Force Base in Md., Friday, July 10, 2020. Trump is heading to Florida to visit Southern Command, attend a roundtable event at a Doral church where he will speak with Cuban and Venezuelan dissidents and attend a fundraiser in Hillsboro Beach. (AP Photo/Susan Walsh)

In his push to get schools and colleges to reopen this fall, President Donald Trump is again taking aim at their finances, this time threatening their tax-exempt status.

Trump said on Twitter on Friday he was ordering the Treasury Department to re-examine the tax-exempt status of schools that he says provide "radical indoctrination" instead of education.

"Too many Universities and School Systems are about Radical Left Indoctrination, not Education," he tweeted. "Therefore, I am telling the Treasury Department to re-examine their Tax-Exempt Status and/or Funding, which will be taken away if this Propaganda or Act Against Public Policy continues. Our children must be Educated, not Indoctrinated!"

The Republican president did not explain what prompted the remark or which schools would be reviewed. But the threat is just one more that Trump has issued against schools as he ratchets up pressure to get them to open this fall. Twice this week Trump threatened to cut federal funding for schools that don't reopen, including in an earlier tweet on Friday.

It's unclear, however, on what grounds Trump could have a school's tax-exempt status terminated. It was also not clear what Trump meant by "radical indoctrination" or who would decide what type of activity that includes. The White House and Treasury Department did not immediately comment on the president's message.

Previous guidance from the Internal Revenue Service lays out six types of activities that can jeopardize a nonprofit organization's tax-exempt status, including political activity, lobbying and straying from the organization's stated purpose.

But ideology is not on the IRS's list, said Terry Hartle, senior vice president of the American Council on Education, which represents university presidents. Any review of a school's status would have to follow previously established guidelines, he said.

"It's always deeply troubling to have the president single out schools, colleges or universities in a tweet," Hartle said. "Having said that, I don't think anything will come of this quickly."

In his latest threat, Trump revived his oft-repeated claim that universities are bastions of liberalism that stifle conservative ideas. He used the same argument last year when he issued an executive order telling colleges to ensure free speech on campuses or lose federal research funding.

His interest in colleges' finances appears to have been renewed as several schools sue the Trump administration over new restrictions on international students. Harvard University and the Massachusetts Institute of Technology sued to block the policy earlier this week, followed by Johns Hopkins University on Friday. The University of California system has said it also plans to sue.

The universities are challenging new guidance issued by Immigration and Customs Enforcement saying international students cannot stay in the U.S. if they take all their classes online this fall. The policy has been viewed as an attempt to force the nation's universities to resume classroom instruction this fall.

Under the rules, international students must transfer schools or leave the country if their colleges plan to hold instruction entirely online. Even if their schools offer a mix of online and in-person classes, foreign students would be forbidden from taking all their courses remotely.

The lawsuit from Harvard and MIT argue that the policy breaks from a promise ICE made in March to suspend limits around online education "for the duration of the emergency."

Until Friday, Trump had mostly focused his efforts on reopening elementary and secondary schools as millions of parents wait to find out if their children will be in school this fall. He has insisted that they can open safely, and in a Friday tweet argued that virtual learning has been "terrible" compared with in-person instruction.

Trump has not said what funding he would withhold or under what authority. But White House spokeswoman Kayleigh McEnany has said the president wants to use future coronavirus relief funding as leverage. McEnany said Trump wants to "substantially bump up money for education" in the next relief package, but only for schools that reopen.

"He is looking at potentially redirecting that to make sure it goes to the student," McEnany said at a Wednesday press briefing. She added that the funding would be "tied to the student and not to a district where schools are closed."

But Trump's control over school funding is limited. The vast majority of funding for public elementary and secondary schools comes from state and local sources, and nonprofit colleges are more likely to rely on tuition or state aid than federal money.

His threats to withhold funding have been denounced by a growing array of education and health groups, including a medical association that the White House has repeatedly cited in its press to reopen schools.

In a joint statement with national education unions and a superintendents group, the American Academy of Pediatrics on Friday said decisions should be made by health experts and local leaders. The groups argued that schools will need more money to reopen safely during the coronavirus pandemic and that cuts could ultimately harm students.

"Public health agencies must make recommendations based on evidence, not politics," the groups wrote. "Withholding funding from schools that do not open in person full-time would be a misguided approach, putting already financially strapped schools in an impossible position that would threaten the health of students and teachers."

The American Academy of Pediatrics has supported a fall reopening, saying in June guidelines that schools should strive to start the academic year with their students "physically present in school." Vice President Mike Pence, Education Secretary Betsy DeVos and McEnany have repeatedly, and as recently as Wednesday, cited the group in defense of Trump's approach.

But Friday's statement acknowledged that it may be best for some schools to stay online. School leaders, health experts, teachers and parents should be at the center of reopening decisions, the groups said, "taking into account the spread of COVID-19 in their communities and the capacities of school districts to adapt safety protocols to make in-person learning safe and feasible."

Some districts have already announced plans for only a partial reopening, with a mix of in-person and online instruction. 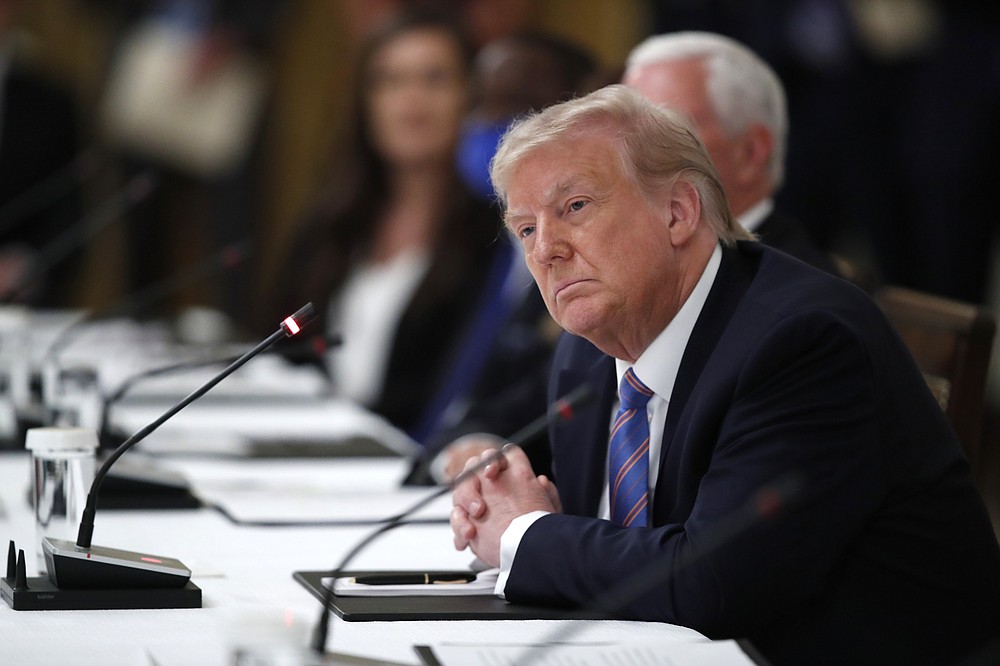 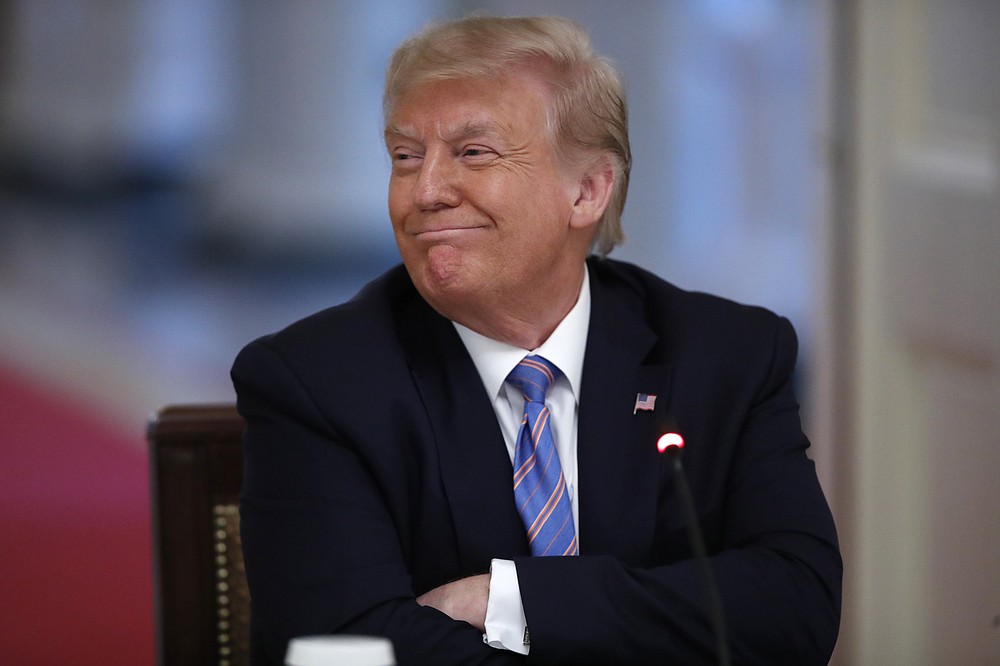 President Donald Trump listens during a "National Dialogue on Safely Reopening America's Schools," event in the East Room of the White House, Tuesday, July 7, 2020, in Washington. When Trump convened the coronavirus roundtable on how to safely reopen schools, the seats surrounding him were filled with parents, teachers and local health officials. The head of the Centers for Disease Control and Prevention was relegated to secondary seating on the side. It was a telling indication of how Trump has sidelined and undercut federal health experts.(AP Photo/Alex Brandon)