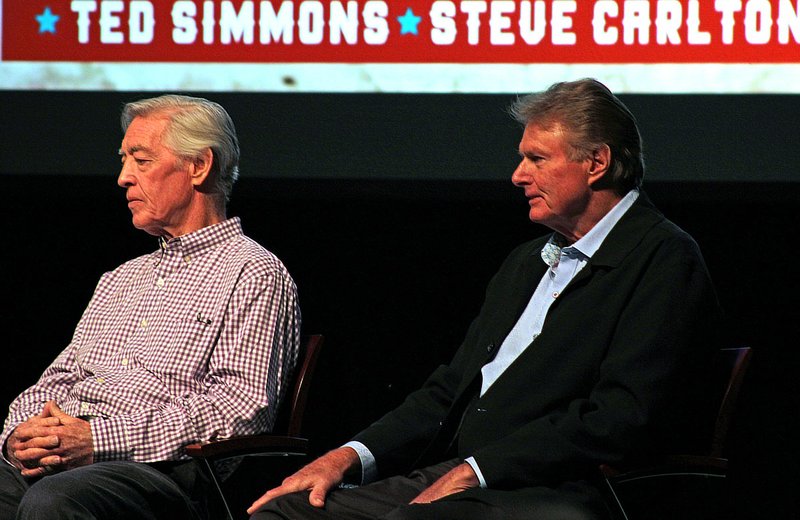 Major League Baseball retirees Ted Simmons, left, and Steve Carlton sit in on a panel discussion at the second annual Baseball Weekend in 2019. - File photo by The Sentinel-Record

Arrison noted that while some venues are hesitant to host large events in the midst of the COVID-19 pandemic, he felt if proper precautions are taken everything would be fine, and holding such events is part of getting back to normal.

The free and public event, originally scheduled for May 8 and 9, will be held in the Hot Springs Convention Center's Horner Hall, a venue with a 1,500-person capacity for an event Arrison anticipates to have about 300 attendees.

"I think everybody's waiting for somebody else to go first," he said. "We're taking all the precautions and doing what the governor's directives tell us to do. We have a very large room for an event that shouldn't need a room that size. ... I think everybody just wants to sort of dip their toe in the water, but somebody's got to jump in."

For the event, Arrison said masks will be required, hand sanitizer will be readily available and there will be plenty of room to social distance in the venue.

"We need to get back to normal," he said. "People are starting to meet, events are starting to happen and this is the first one on our schedule that was postponed, so we rescheduled it, and all our Hall of Fame players are coming in, so we're just really excited about it."

Arrison noted the Baseball Weekend will not be the first large gathering the convention center will be hosting as it emerges out of the pandemic's restrictions. He said there will be four graduations, a knife show and a hot tub sale this month.

"I think it's the perfect environment, and we've got to get back to normal," he said.

Baseball Weekend will include appearances by Major League Baseball veterans Ted Simmons, Lee Smith, Steve Carlton and Al Hrabosky; a groundbreaking for Majestic Park, the new baseball complex located at the site of the old Boys & Girls Club; "Picturing America's Pastime," a National Baseball Hall of Fame photography exhibit that will be available through August and September; and a Society for American Baseball Research meeting open to the public.

"It'll be a baseball lover's dream," Arrison said in a news release.

"Steve Carlton, Ted Simmons and Al Hrabosky are returning for this year's Baseball Weekend because of the overwhelming response to their appearances at last year's Baseball Weekend," Arrison said in the release. "It turned out that the fans who attended last year did not have sufficient time to finish their discussions with these baseball legends, so we thought we would bring them back for more opportunities for the fans to discuss baseball in the past and the present.

According to the release, all four players will participate in panels, question-and-answer sessions and autograph sessions with the public.

The weekend will begin at 6 p.m. Aug. 14 with a groundbreaking at Majestic Park at Carson and Belding streets.

The schedule for Aug. 15 includes the following:

• 10 a.m. -- The National Baseball Hall of Fame's exhibit "Picturing America's Pastime" will be available for viewing in the main concourse of the convention center.

• 1 p.m. -- Simmons and Hrabosky will hold a public discussion titled "A Conversation" in Horner Hall.

• 2 p.m. -- Autograph session with Simmons and Hrabosky in Horner Hall.

• 3:45 p.m. -- Smith and Carlton will hold a public discussion titled "The Evolution of Pitching" in Horner Hall.