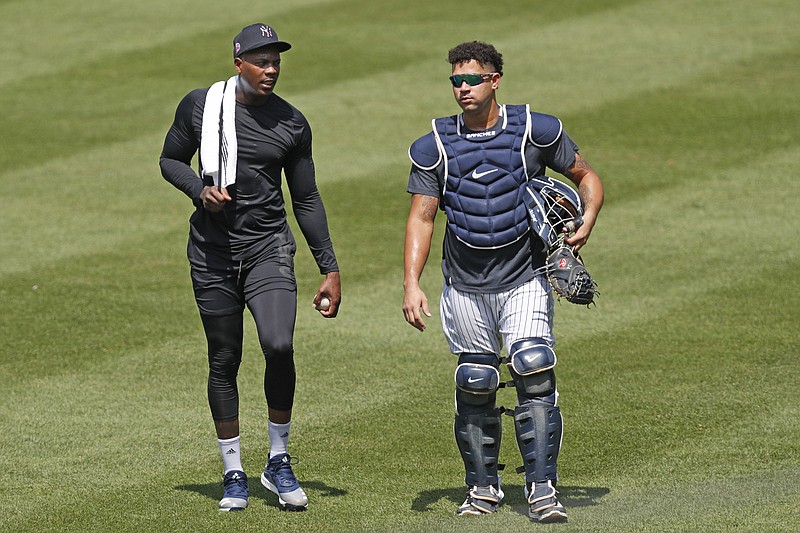 New York Yankees relief pitcher Aroldis Chapman, left, leaves the field after a bullpen session with catcher Gary Sanchez during a summer training camp workout on July 5 at Yankee Stadium in New York. Chapman became the latest high-profile player to test positive for the coronavirus. - Photo by Kathy Willens of The Associated Press

The Yankees are scheduled to start the virus-delayed season on July 23 at the World Series champion Washington Nationals. The AL champ Yankees already were missing star infielder DJ LeMahieu and right-hander Luis Cessa, who both tested positive last week and are still isolating at home.

Boone wouldn't say whether Chapman had been at Yankee Stadium since throwing a bullpen session on Tuesday. He said the team the team had gone through contact tracing protocols, and no other players or personnel would be forced to isolate because of Chapman's positive test.

In Houston, the Astros canceled their workout after learning that a staff member could have been exposed to a person outside the organization with the coronavirus.

It's the second time this week the Astros have wiped out a practice session because of concerns about the pandemic. Houston also scrapped its Monday workout because of delays with testing results due to the holiday weekend, as did some other teams around the majors.

"As part of MLB's testing and reporting plan, we were alerted that a staff member was potentially exposed to a COVID-positive individual outside the organization," Click said. "Out of an abundance of caution, we have canceled today's workout. We are working closely with MLB and our team physicians to follow the established testing and cleaning protocols so that we can safely bring our players and staff back to the field as soon as possible."

The cancellation came after All-Star third baseman Alex Bregman was held out of practice on Wednesday because of delays in receiving his test results.

Also testing positive was Kansas City backup catcher Cam Gallagher said he has the virus. Gallagher, who said he is asymptomatic, participated in an intrasquad game on Friday night before receiving his positive test results on Saturday.

A day after joining his team for workouts, Rangers outfielder Joey Gallo said that despite two positive tests, he isn't sure if he had the coronavirus.

His confusion stemmed from the fact that he didn't experience symptoms and also had multiple negative tests. Gallo said he planned to have a more extensive antibody test to be sure after a finger-prick test didn't indicate that he had COVID-19.

The All-Star slugger missed the first week of Texas' summer camp after two positive tests that sandwiched a negative result during intake testing. He had two negative tests on his own outside of the MLB testing program but wasn't cleared to join the team until having consecutive negative tests under the protocol.

"It was a strange process to go through. There wasn't much anybody could have done because the test came up positive," Gallo said. "It was weird, it was hard to get real answers on if I really had it or not. ... As of right now I am coming up negative and that's how I am hoping to stay the rest of the season."

The delay of the season due to the pandemic has given Yoenis Céspedes time to recover from injuries and the Mets slugger said he'll be ready for the first game.

The 34-year-old slugger has struggled with a string of injuries to his feet and legs that have kept him out of the lineup for almost two years. He could be a good candidate to be the team's designated hitter with the National League using it this season.

The two-time All-Star missed last season and most of 2018. He had surgery on both heels and then broke his right ankle in a nasty fall at his Florida ranch.

Cleveland outfielder Delino DeShields Jr. worked out Saturday for the first time since his COVID-19 diagnosis.

DeShields, who had mild symptoms, had been in Cleveland for a few days but wasn't cleared until Saturday after testing negative twice.

Indians manager Terry Francona said DeShields, who was acquired in a trade from Texas in December, took batting practice and did some running.

"He's been bottled up for close to three weeks, so it's going to take a little while to get him back rolling," Francona said. "But that was good to see."

Atlanta lefty Cole Hamels, who is returning from a sore left shoulder, was unable to throw a scheduled side session because of triceps tendinitis.

Manager Brian Snitker says Hamels says he has faced this problem before in a normal spring training.

"I think we're probably a week away from seeing where he's actually going to be when this thing starts," Snitker said.