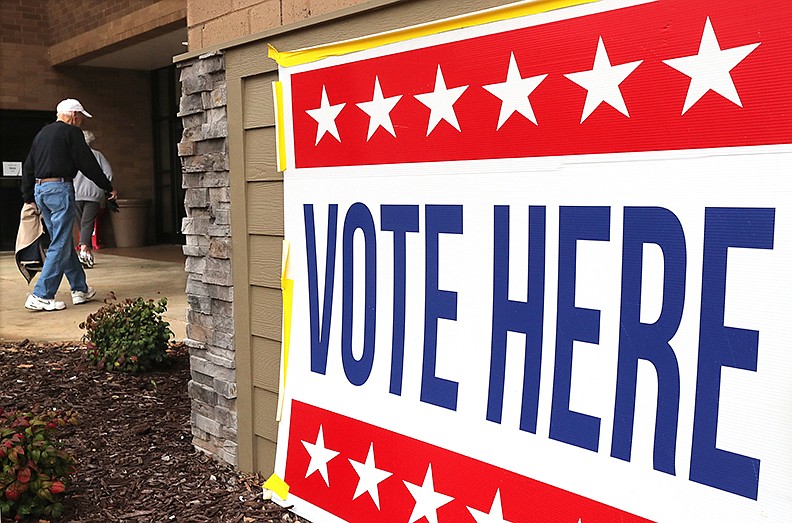 An man enters the Hot Springs Mall early voting location on March 2. - Photo by Richard Rasmussen of The Sentinel-Record

Garland County is preparing for 10,000 to 15,000 people to vote absentee in the Nov. 3 general election, a tenfold increase from the 1,396 county voters who cast absentee ballots in the last presidential election.

County Election Commission Chairman Gene Haley said earlier this week that the projection is based on the Lakeside School Board's March 31 runoff, when more than a third of the roughly 400 votes were absentee. The March runoff elections were the first held during the public health emergency the governor declared in March and extended last month.

More than 40,000 county voters cast ballots in the 2016 general election. The absentee vote wasn't large enough to affect outcomes, but it will in November if the election commission and county clerk's projection bears out.

Haley said for that reason it's critical absentee voters follow instructions and correctly fill out paperwork they receive from the clerk's office. Failing to do so will disqualify their ballots.

"When you do it by mail, we have to depend on you to fill that out correctly, because if you don't fill it out correctly we can't count it," Haley said. "That's the scary part. Somebody wants to vote, and we want them to vote, and we want to count their vote, but if they don't fill out the documents correctly we can't count it. You have to send them a letter after the fact saying your vote didn't count.

The election commission has to deliver absentee ballots to the clerk's office by Sept. 17. The clerk's office can begin mailing ballots the next day. A voter statement form will be included with the ballot and return envelopes. The form has to be filled out correctly for the ballot to be counted.

In addition to the form, a copy of an approved photo ID needs to be put in the return envelope for the form, but Haley said forms returned without a copy of the voter's ID won't disqualify the ballot that's returned to the clerk's office in a separate envelope.

Those ballots will become provisional ballots and counted during the 10-day certification period following Election Day. Haley said signing the optional verification of identity section at the bottom of the voter statement is akin to signing the sworn statement provided to voters who don't provide ID when voting in person.

"In the Lakeside election we had more than 100 absentee ballots, and there were eight without ID," he said. "But they all signed the (optional verification of ID), so we had to count them. Had we not counted them, you've got to have time to send them a letter and tell them the hearing is 10 days from now so they can protest.

"You don't have time to write all those letters to inform them they have until (the Monday after the election) to (show ID). When it's a provisional ballot in person, I can tell you all that stuff. I have the form that tells you what needs to happen."

The law limits absentee ballots to voters who will be unavoidably absent from the polls or who have an illness or physical disability, but earlier this month Secretary of State John Thurston said absentee ballots will be provided to registered voters concerned about getting or transmitting the coronavirus at polling sites.

Absentee ballot applications that can be downloaded from the election commission website, http://www.garlandcountyvote.org, have three boxes for applicants to check. One for residents of a long-term care facility, one for people who won't be able to vote in person because of illness or physical disability and one for voters who will be unavoidably absent from the polls.

The box for unavoidably absent voters includes "or fear of COVID-19" as a reason for voting absentee.

"We've never turned down someone who's asked for an absentee ballot in Garland County," Haley said. "The law says if you're absent. We don't make people prove that. The bottom line is it doesn't make any difference which one you check. They're going to send you an absentee ballot."

The state election code allows absentee ballots from voters living overseas to be submitted to the clerk electronically. All others have to be returned in person or by mail. Nov. 2 is the deadline for in-person delivery and Election Day is the mail-in deadline.

Ballots don't have to be sent to the address where the voter is registered. Voters can have ballots mailed to a different address.

"You can have that ballot sent somewhere else," Haley said. "That's the scary part. If we had a bunch of ballots sent to one address, that would raise a flag."

A designated bearer can pick up a voter's ballot and return it to the clerk, but the law prohibits a bearer from obtaining or delivering ballots for more than two voters per election. There is an exception for administrators of long-term care facilities.

The bearer has to sign their name and list their address on the voter statement that's returned with the ballot.