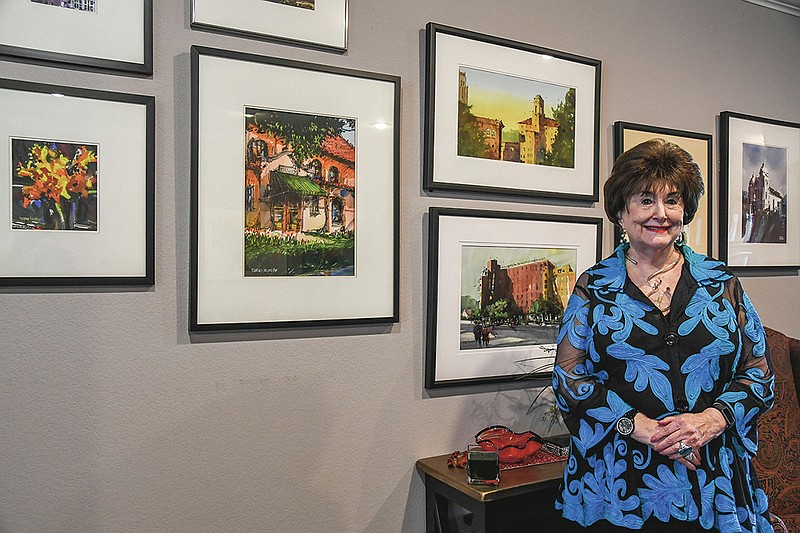 Dorothy Morris is photographed on April 24, 2020, standing by paintings in her home all done by local artists.-Photo by Grace Brown of The Sentinel-Record

For anyone familiar with the local art scene, the name Dorothy Morris most likely sounds familiar. Although she is not an artist herself, Morris has poured her support into several artistic ventures, nonprofits and educational programs across Arkansas for more than three decades. Her legacy of generosity, support for future generations, and efforts to uplift other women are now immortalized with her induction into the Arkansas Women's Hall of Fame.

"My philanthropy work for over 30 years has been joyful for me, and I never even thought about being rewarded," Morris said. "I'm rewarded all the time with the people I've helped to be the best they could be. I'm just stunned in honor.

"It feels good. I never thought I was going to be rewarded so this was really shocking and a great honor. I never expected it."

Morris was born in Bismarck, one of four children of Eunice and Doyle Looper, and says she was brought up in a "very modest family." Her family moved to Malvern and Morris graduated from Malvern High School in 1960. Her parents made sure to teach her the value of a dollar and that hand-me-down clothes were as good as anything else. She kept what she learned close at heart as she embarked on her own journey in life.

"I always had a lot of drive in me and I wanted to make things happen, I wanted to improve things," she said. "When I was attending Malvern High School, I realized I loved basketball. But our physical education class in Malvern did not have a basketball team (for women). I remember then thinking about how all the men get all the money for their sports. Everything, including the uniforms. We never got any of that.

"I remember my high school PE teacher, Miss Betty Wallace, and she encouraged the girls that enjoyed it. She was an innovator. She made it possible for us to play other teams at times, and I loved it. (However,) there was still no money for us; it was all for the boys. I remember thinking, 'Well this is just unfair.' but that was just the way things were in the '50s. At that point, I thought if I can ever do anything to help women, I'm going to do just that."

At the beginning of her philanthropic career, Morris left Arkansas to move to Dallas. There, she embarked on a successful career in business and real estate for 25 years. All the while, she began volunteering with different charities in the area and donating any amount she could. After the loss of her first husband, she began selling real estate full time and eventually moved back to Arkansas.

"When I returned to Arkansas, I met my second husband Walter Morris, a great philanthropist. It was like, we just melded together because we both loved philanthropy. It was just a great match," she said.

"I never wanted that many material things so we took the money he made on the stock market, he had made a lot of money on the stock market he was from Wall Street, and we just spent that money on good causes. I just loved every minute of it. I love giving and I'm still giving. It's just a wonderful, rewarding feeling."

Before their marriage, her husband, Walter Morris, set up a small foundation in New York under his name. He then moved to Arkansas where he met and married Dorothy Morris. The foundation was then made into an Arkansas foundation and they began work as full-time philanthropists in the '80s.

"I was always giving money to things. I didn't have a lot of money, but I would give what I could. For instance, multiple sclerosis. My mother had multiple sclerosis and I always gave money towards research," she said.

"I was always a little philanthropist and didn't know it until I met Walter. Then I went full time as a philanthropist and loved every second of it. I would look for opportunities to give money, to get involved. I am a hands-on philanthropist. I wanted to make sure it was run properly; that every dollar counted," she said.

Morris claims she prefers to call herself a "modern-day vermittler" -- a German term meaning facilitator, mediator, arbitrator, broker or middleman. She calls herself that because she gives "seed" money to organizations to start projects. Her stewardship of the Morris Foundation produced her signature achievement: an inclusive, collaborative and creative approach to philanthropy.

"The Morris Foundation is considered a small foundation, but I feel that, even with my 'small foundation,' I have worked with so many different nonprofits. You can make an impact with just a little bit of money. I feel that my contributions to my community and state are very thoughtful. I am a hands-on type philanthropist," she said.

"My philanthropy work has been a source of great education and personal reward. Most of the nonprofit leaders that I've worked with are some of the finest people. They are compassionate and caring. I have thoroughly enjoyed my career, that's for sure," she said.

Working with fellow Hot Springs philanthropist Don Munro and the Munro Foundation, Morris helped create and maintain the Hot Springs Giving Circle, a form of "participatory philanthropy" that has distributed nearly $1 million to the surrounding community since its inception in 2008. During 2018's Arkansas Gives, the Morris Foundation raised a half-million dollars in one day for Arkansas nonprofits.

"I like to start by helping the nonprofits if I see they do not have board training and they don't know a lot about it. I like to provide education so that I can make sure that the board members know what their role is with that organization ... I've had a lot of workshops to help small nonprofits first get their board in order, and then everything will flow from that," she said.

Each year, Morris supports more than 50 area nonprofit organizations. Her passion for the arts, feeding the hungry, providing access to medical care, and programs benefiting women and children is her way of "leaving the world a little better" than she found it. While she holds a special place in her heart just for art, Morris said the charities closest to her heart help support the next generation of great minds.

"I connect with many organizations from the arts to medicine, food banks. However, I do enjoy helping children. I've supported a lot of children's programs, and that gives me great satisfaction to see them grow and be contributing citizens. It's a very rewarding feeling. I really do enjoy working with children and teenagers," she said.

Support form her foundation has been instrumental in supporting Arkansas institutions of higher learning, from the University of Central Arkansas' Shakespeare program to National Park College, and the Arkansas School for Mathematics, Sciences, and the Arts. More recently, she took up supporting the growing Bismarck High School Band.

"The Bismarck band does really great things; they win awards and everything. The (band director) called me and I decided to set up a $500 scholarship for three years. ... He has some extraordinary students, so I'm going to give them a little boost," she said.

Her reach extends statewide and regionally, from supporting the Mid-America Arts Alliance and Arkansas Food Bank to funding research at Little Rock's University of Arkansas for Medical Sciences. From Opera in the Rock to UCA's annual Shakespeare festival and AETN, the Morris Foundation has proved itself an advocate for the arts in Arkansas.

Last year, Morris announced her retirement from the foundation. However, her giving spirit remains strong. Instead of giving up on her philanthropy work entirely, Morris has found a better work-life balance. She loves to travel and until the pandemic, she took every opportunity to explore.

"I'm never going to give up my philanthropy. There are certain causes I will always be passionate about. The Bismarck band, for example," she said.

While COVID-19 has officially postponed her induction ceremony into the Arkansas Women's Hall of Fame, Morris is elated nonetheless.

"I loved my work, my philanthropy, and I guess people noticed it. At first, I could not believe that but it feels good to be noticed for my work and to know that people care. I wasn't expecting it. I never worked for this but it's really a wonderful recognition," she said.

"In my heart, I've always cared a lot more for people than I have for a lot of money."

According to the Arkansas Women's Hall of Fame, it honors women whose contributions have influenced the direction of Arkansas in their community or the state. The hall inducts contemporary or historical women who have been born in and achieved prominence within the state, or been a resident of Arkansas for an extended period after achieving prominence here or elsewhere and have: made significant and enduring contributions to their field of endeavor, professional or otherwise; affected the social, cultural, economic or political well-being of the community, state or nation; elevated the status of women and positively impacted women and girls; helped open new frontiers for women and for society in general; or inspired others by their example.