Get inspired and cook up something good with Evilo 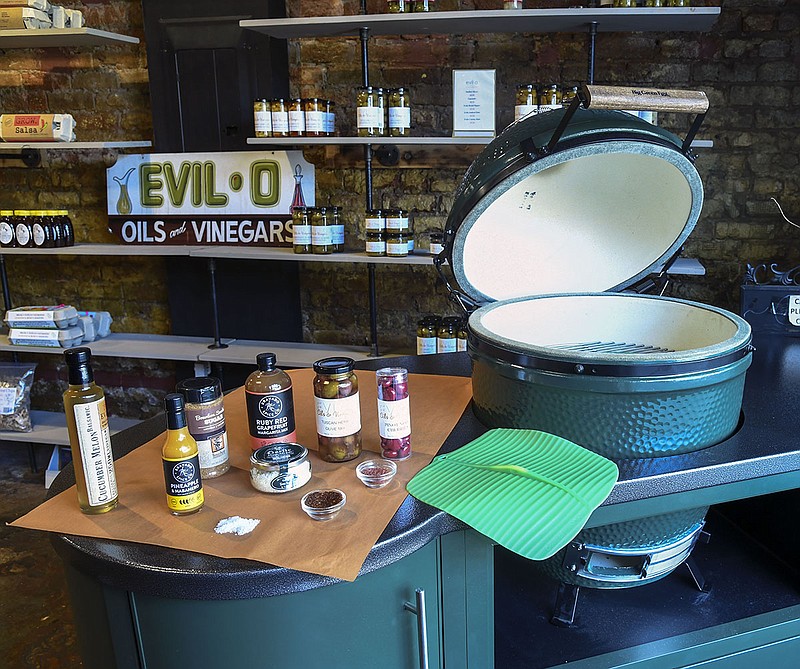 Products from Evilo Oils and Vinegars are photographed on June 16, 2020.-Photo by Grace Brown of The Sentinel-Record

Going stir crazy from a still mostly-quarantined lifestyle? Stir something up in the kitchen instead, and head down to Evilo Oils & Vinegars, 360 Central Ave., for a supply of oil and vinegars you never knew you needed and you never knew could have a place outside of salads or a cooking base.

"We specialize in infused olive oils and balsamic vinegars, and what I mean by 'infused' is they take a base balsamic and a base olive oil and they just naturally add different flavors and things to it," Evilo manager Nicke Harper said. "As we sit right now, I want to say we have about 96 different olive oil and vinegar flavors; both white and dark balsamics and the just a very, very nice light olive oil."

As far as the balsamic vinegars are concerned, they have all been aged for 25 years, Harper said.

"So as opposed to a balsamic you find in the grocery store where salad is pretty much your only option, with these you can actually use them as injections, they're great as marinades, obviously as a salad dressing as well, but even some of them as a dessert balsamic or a drink balsamic," she said. "You could put them in sparkling water or ice tea or drizzle them over fresh fruit or pound cake or even cheesecake; things of that nature."

Not an oil and vinegar connoisseur?

Evilo has a blog at olivebackwards.com that offers recipes and inspiration for chefs looking to incorporate the Evilo products in their cooking.

A recipe for a "Strawberry Wine Shrub" can be found on the blog. Ingredients include 1 lb. of fresh strawberries, 1 cup of sugar, 1 cup of water, 1 cup of Italian Lambrusco red wine vinegar, 1 tbsp. of 25 Star Balsamic Vinegar and sparkling water.

• Mix sugar and water in a medium saucepan over low heat until sugar is completely dissolved.

• Slice the strawberries thinly, then add them to the saucepan and bring to a low simmer.

• Let the mixture simmer until the syrup is the color of the fruit and the strawberries look tired.

• Add the Italian Lambrusco Red Wine Vinegar and the 25 Star Balsamic Vinegar. Whisk to combine, then return to a simmer.

• Remove the saucepan from the heat and strain the fruit from the syrup.

• Pour the syrup into a bottle or jar and store in the fridge.

• Fill a glass with ice and pour your shrub syrup over the ice, then top it with sparkling water, stirring slightly to combine, or add a shot of your favorite liquor for an all-natural cocktail.

Harper said the longer the balsamic vinegars are aged, the more doors open to what can be done with them. As for the olive oils, she said they are very similar to a traditional cooking oil except for the care put into their import and their health benefits.

"They have a lot more health benefits in them," Harper said. "It's actually called polyphenol, and ours have twice, if not three or four times as many polyphenols as you would find in a grocery store olive oil."

Evilo strives to keep upward of 100 different types of oils and vinegars in stock.

"We like the variety and we like for people to be able to come in and just kind of mix and match and do their own pairings and combinations and things like that," Harper said. "So we always run set prices as well, where you can buy an oil and vinegar set and they're always like buy three, get three free."

Currently, since it's "summery and light," Evilo's bestselling oil and vinegar combinations are the Italian Lambrusco red wine vinegar with the Garlic Mushroom infused olive oil, she said. Both ingredients are used to create what Harper describes as the "greatest" summertime recipe on the blog: "Evilo Pasta Salad."

• Boil pasta in salted water according to directions on the box.

• Once pasta is done, transfer it to a large container with a lid.

• Pour the vinaigrette over the pasta. Add the chopped olives and tapenade.

• Secure the lid tightly and toss the pasta until evenly coated. Add salt and pepper to your personal taste.

• Refrigerate for at least two hours for flavor to develop.

"Girl, I'm telling you I did not like Brussels sprouts until those," Simon said.

The "Bacon and Maple Brussels sprouts," a recipe adapted from "I Heart Eating," can also be found on the blog. Ingredients include 1 pound of fresh or previously frozen Brussels sprouts, 2 tbsp. of bacon infused EVOO, 3 strips of bacon, 4 tbsp. of maple balsamic vinegar and salt and pepper to taste.

• Halve Brussels sprouts, put in a large bowl and set aside.

• Cook bacon until it is crisp. Drain, chop and add to Brussels sprouts.

• In a small bowl, mix EVOO and vinegar. Pour over Brussels sprouts and toss to coat.

• Spread out Brussels sprouts on a baking sheet in a single layer. Sprinkle with salt and pepper.

She said for her 18-month-old daughter, she likes to top ice cream with a bit of the chocolate vinegar, but said any of Evilo's sweet vinegars would be good for it.

"Not Your Grandma's Ice Cream" is another recipe that can be found on the blog. Ingredients include 2 cups of heavy whipping cream, 1 can of sweetened condensed milk and 1 package of Evilo's dip mix The Resident Chef's White Chocolate Snacker Mix.

• Pour your heavy whipping cream, condensed milk and snacker mix into a bowl.

• Pour mixture into a freezer-safe container.

• Allow to freeze for 1-2 hours, or until the ice cream has completely firmed.

• Dish it out, garnish it with your favorite toppings and enjoy.

But ice cream topping isn't where Simon stops with utilizing Evilo's vinegars. One night, while having a martini-themed party, she found herself out of chocolate syrup.

"I didn't know what to do, so I actually used the chocolate vinegar for our chocolate martinis to kind of dress the cup with, and I ended up using our olive vinegar to make the dirty ones -- girl there's so much (with the vinegars)," she said.

"Dark Chocolate Balsamic Martini," a recipe from "Scout Mob," can also be found on the blog. Ingredients include vodka, Dark Chocolate balsamic vinegar and lavender sugar.

• Chill approximately 3 oz. of vodka in the cocktail shaker.

• Shake all ingredients and strain into glasses.

Although Evilo has some basic vinegars in stock, Simon said most are not bitter. She said the sweeter flavors, like cucumber melon and raspberry ginger, are good for dressing salads.

Evilo was founded by Justin Simon in 2014. His wife, Charlene Simon, is the founder of Bathhouse Soapery, which neighbors Evilo. Both businesses are located in downtown Hot Springs.