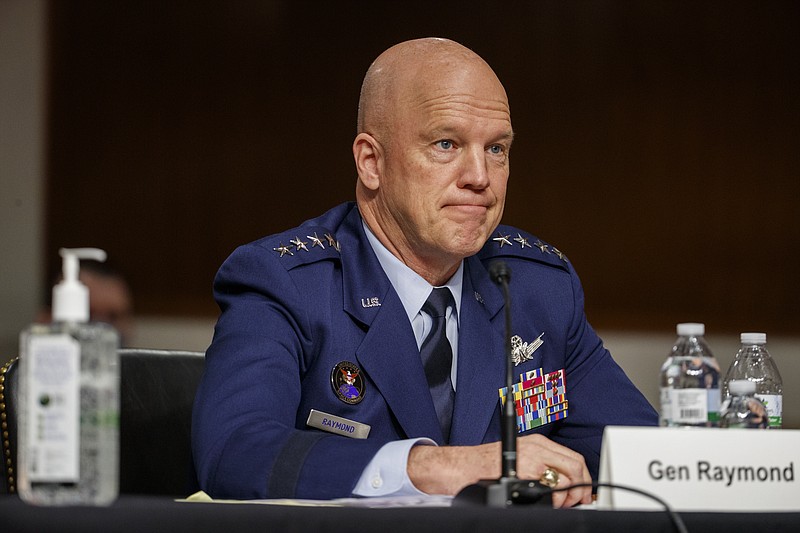 In this May 6 file photo Chief of Space Operations at U.S. Space Force Gen. John Raymond testifies before the Senate Armed Services Committee hearing on Capitol Hill in Washington. The United States accused Russia on Thursday of conducting a test of an anti-satellite weapon in space, asserting that it exposed Moscow's intent to deploy weapons that threaten U.S. and allied satellites. “The Russian satellite system used to conduct this on-orbit weapons test is the same satellite system that we raised concerns about earlier this year, when Russia maneuvered near a U.S. government satellite,” said Raymond. - Shawn Thew/Pool via AP

WASHINGTON -- The United States accused Russia on Thursday of conducting a test of an anti-satellite weapon in space, asserting that it exposed Moscow's intent to deploy weapons that threaten U.S. and allied satellites.

In Moscow, the Defense Ministry said the July 15 event involved "a small space vehicle" that "inspected one of the national satellites from a close distance using special equipment." It added that the inspection "provided valuable information about the object that was inspected, which was transmitted to the ground-based control facilities."

The U.S., however, said the Russian actions were inconsistent with the stated mission of an inspector satellite.

"The Russian satellite system used to conduct this on-orbit weapons test is the same satellite system that we raised concerns about earlier this year, when Russia maneuvered near a U.S. government satellite," said Gen. John W. Raymond, commander of Space Command and the head of U.S. Space Force.

"This is further evidence of Russia's continuing efforts to develop and test space-based systems, and consistent with the Kremlin's published military doctrine to employ weapons that hold U.S. and allied space assets at risk."

In a space strategy document published last month, the Pentagon asserted that "China and Russia present the greatest strategic threat due to their development, testing, and deployment of counterspace capabilities and their associated military doctrine for employment in conflict extending to space."

It added, "China and Russia each have weaponized space as a means to reduce U.S. and allied military effectiveness and challenge our freedom of operation in space."

Private U.S. space analysts said U.S. concerns about the July 15 event appear justified in an era of rapidly improving space technologies that could pose threats to satellites that are integral to modern life in the U.S. and globally. Defense of these satellites was a key reason the Trump administration create U.S. Space Force last December.

In a separate statement, the head of the British government's space directorate, Air Vice-Marshal Harvey Smyth, echoed the American assertion about the July 15 event. He wrote on Twitter that the Russians had launched a projectile "with the characteristics of a weapon."

The State Department's top arms control official, Christopher Ford, said the event exposed Russia's "hypocritical advocacy" of outer space arms control, "with which Moscow aims to restrict the capabilities of the United States while clearly having no intention of halting its own counterspace program -- both ground-based anti-satellite capabilities and what would appear to be actual in-orbit anti-satellite weaponry."

Space Command said that on July 15 a Russian satellite, designated Cosmos 2543, "operated in abnormally close proximity to a U.S. government satellite in low-earth orbit before it maneuvered away and over to another Russian satellite, where it released another object in proximity to the Russia target satellite. This test is inconsistent with the intended purpose of the satellite as an inspector system, as described by Russia."

Brian Weeden, a space policy expert at the Secure World Foundation, which advocates for peaceful uses of outer space, said in an interview that the U.S. and British concerns are justified.

"I think they're on to something," he said. "I, too, found this event very suspicious."

Weeden said an object separated from Cosmos 2543 at a speed of perhaps more than 400 miles per hour.