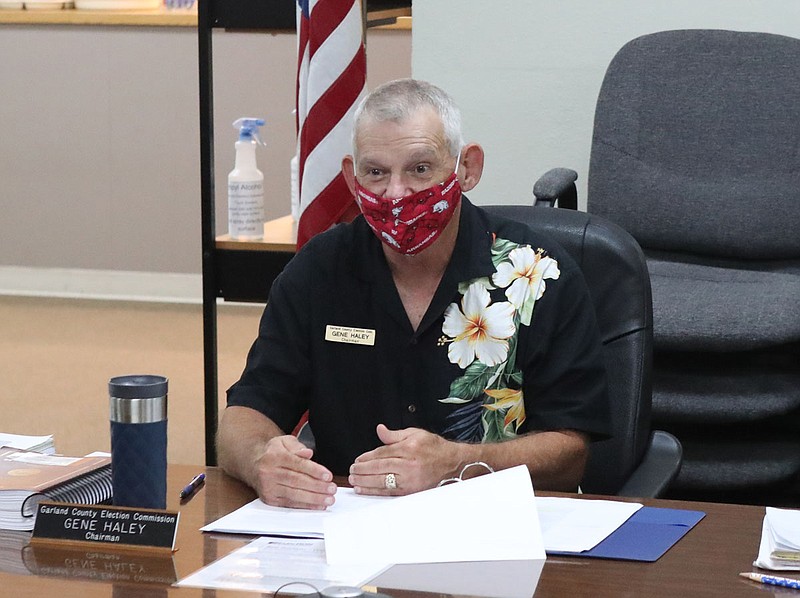 With less than three months until early voting begins for the Nov. 3 general election, many preparations remain for the first presidential election to be held during a pandemic.

The Garland County Election Commission will have to make allowances for the unusual circumstances, including ordering thousands of absentee ballots and deciding how to prepare polling sites in accordance with public health guidelines. The commission plans to order as many as 15,000 absentee ballots, a more than 10-fold increase from the number counted during the 2016 presidential election.

Election Commission Chairman Gene Haley said earlier this week that the clerk's office has received about 1,000 absentee applications, about 10 times the amount typically received at this point in an election cycle.

Applications are available on the county, election commission and secretary of state's websites. The law limits absentee ballots to voters who will be unavoidably absent from the polls or who have an illness or physical disability, but earlier this month Secretary of State John Thurston said absentee ballots will be provided to registered voters concerned about getting or transmitting the coronavirus at polling sites.

The state election code doesn't allow envelopes containing ballots to be opened until 8:30 a.m. on Election Day. Haley said the county will have to hire extra workers to process the ballots.

"The problem is on Election Day when we actually open the ballot-only envelope," he said at the commission's meeting Wednesday. "If we have 15,000 envelopes to open up and scan on Election Day, that's huge. It could take several days."

Workers can start opening separate envelopes containing voter statements and copies of the voter's ID a week before Election Day. That information will be used to determine if the corresponding absentee ballot will be counted.

Haley said it's critical voter statements be filled out correctly.

"That's my only problem with absentee ballots," Haley said. "I don't really worry too much about fraud. It's just people making honest mistakes and us not being able to count it.

"If they miss the mailman, and it gets there a day late, we can't count it," Haley said. "There's lots of things that can go wrong."

The day before Election Day is the deadline for in-person pick up of applications and in-person delivery of absentee ballots. Haley said a dropbox will be available in the county courthouse, outside the clerk's office. People delivering ballots for someone else will have to check in with the clerk's office prior to delivering the ballot. Voters have to indicate on their applications if they've designated someone to deliver their ballot.

The designated bearer has to sign the application and voter statement. The law prohibits a bearer from obtaining or delivering ballots for more than two voters per election. There is an exception for administrators of long-term care facilities and postal workers.

Haley said cleaning supplies and protective equipment the secretary of state is providing counties should arrive by next month. The county is expected to get 530 KN95 reusable face masks, 60 to 85 gallons of hand sanitizer, 1,530 pairs of disposable gloves, 174 to 200 face shields and 100 Plexiglas shields to place between poll workers and voters.

Because the materials are provided through federal coronavirus relief funds, Haley said they can only be used in federal elections. They couldn't be used in the event of a runoff in a city election, he said. Hot Springs, Mountain Pine, Fountain Lake and Lonsdale are the four cities in the election commission's jurisdiction. Hot Springs doesn't require candidates for city director to win a majority of the vote, only a plurality.

"If we have a runoff in one of the cities, we can't use this stuff, according to the federal government," Haley said.

The secretary of state's office will send the county 42,300 disposable styluses that will allow touch-free voting, but Haley said it's unclear if they'll work on tablets voters use to check in at polling sites and touch screens they use to mark their ballots.