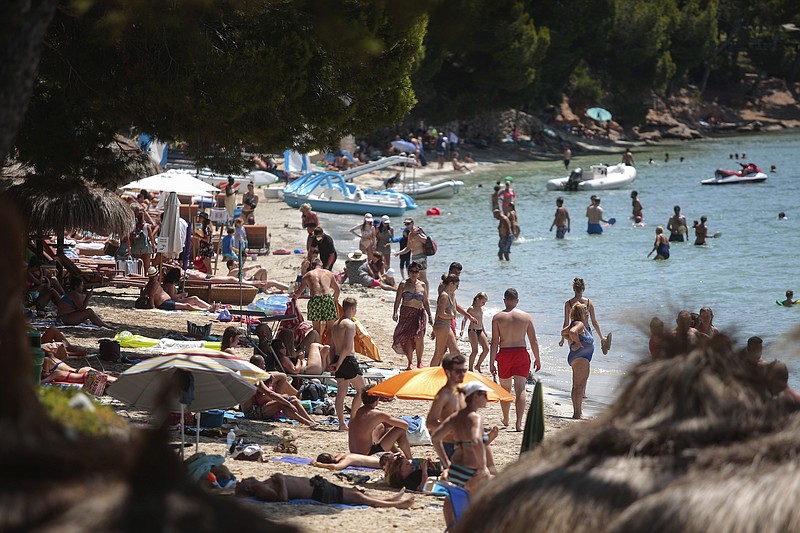 Sunbathers enjoy the beach in Pollença, in the Balearic Island of Mallorca, Spain, Tuesday, July 28, 2020. The U.K. government's recommendation against all but essential travel to the whole of Spain means that all travelers arriving in Britain from that country will have to undergo a 14-day quarantine. (AP Photo/Joan Mateu)

Eds: UPDATES: With material from Greece, Lebanon.; With AP Photos.

LONDON (AP) -- Concerns over a "second wave" of coronavirus infections brought on by returning vacationers are wreaking havoc on Europe's tourism industry, particularly in Spain, following Britain's effective ban on travel to the country.

In a move indicative of the continent's piecemeal approach to the virus, London has recommended against all but essential travel to the whole of Spain following an upswing in new infections there.

And all travelers arriving in Britain from Spain will have to undergo a 14-day quarantine.

"I'm afraid you are starting to see in some places the signs of a second wave of the pandemic," British Prime Minister Boris Johnson said Tuesday in defending his government's new travel advice.

"I'm afraid if we do see signs of a second wave in other countries, it is really our job, our duty, to act swiftly and decisively," he added.

The move not only dashed the hopes of many British holidaymakers for a getaway this summer, but also fanned renewed uncertainty within Europe's key tourism industry over how to plan ahead amid authorities' responses to new COVID-19 outbreaks.

Johnson indicated that there could be further changes to the government's travel advice for other holiday destinations in Europe.

Germany also tightened its travel advice for Spain, advising against travel to the northeastern regions of Catalonia, Aragon, and Navarra. Norway has ordered a 10-day quarantine for people returning from the entire Iberian peninsula, and France urged its citizens not to visit Catalonia.

The head of Germany's national disease control center also warned of "really, really worrying" developments over the last two weeks amid a resurgence of virus outbreaks.

Robert Koch Institute chief Lothar Wieler pointed to "a lot of small outbreaks in various places at the same time" that are becoming more frequent.

Wieler urged Germans not to let their guard down and to stick to social distancing, hygiene and mask-wearing rules that "must never be questioned," after new studies showed that people have become more complacent about COVID-19.

"We don't know if this is the beginning of a second wave, but of course it could be. It would begin with rising figures," Wieler said. "If we all keep to these rules, I am still optimistic that we can prevent this."

"The U.K. government must work closely with the travel industry, as this level of uncertainty and confusion is damaging for business and disappointing for those looking forward to a well-deserved break," TUI UK said.

The U.K. has the highest official coronavirus death toll in Europe, with nearly 46,000 deaths. One of the reasons cited for that is that many travelers brought the virus back during the February school break after skiing trips in France, Italy and Spain.

Professor Keith Neal, an epidemiologist at the University of Nottingham, said it makes sense to advise against travel to Spain during the summer season.

"Some people have criticized the lack of notice, but with cases rising any delay would only increase cases in the U.K," he added.

Spanish Prime Minister Pedro Sanchez called the new recommendation "a mistake," saying that the upsurge in new COVID-19 cases is only focused in the regions of Catalonia and Aragon, and is much less severe than the number of cases reported in the U.K.

Sanchez spoke as figures were released showing that his country lost more than a million jobs in the second quarter of this year. Spain's official statistics agency INE said that most were lost in the service sector, with the worst-hit areas being Catalonia, Andalusia and Madrid.

Spanish Foreign Minister Arancha Gonzalez Ayala tried to strike a conciliatory tone, saying that Madrid is trying to get the British government to concentrate on the scientific data, since the outbreaks are contained in specific areas within Spain, while coronavirus infection rates on the country's vacation islands are much lower than in the U.K.

Spain is still in talks with London, "trying to find a solution which meets epidemiological criteria," Ayala said during an official visit to Greece Tuesday.

Meanwhile, Madrid's regional government made the use of face masks mandatory in all public areas and limited the number of people that can gather in one place, part of a drive to curb new coronavirus outbreaks.

Regional government head Isabel Díaz Ayuso said no more than 10 people can be present at private gatherings, while nightlife venues must close their doors at 1 a.m. -- early by Spanish standards.

Díaz Ayuso said an information campaign will focus on young people, who are largely blamed for spreading the coronavirus through their social life. She said young people "have it in their hands to reverse the trend."

Effective Tuesday, anyone caught drinking a beer in the street in Barcelona or elsewhere in the Catalonia region could be fined a maximum of 15,000 euros ($17,600). The measure targets street parties mostly frequented by young people.

In another tourism-reliant country, Greece, the government said Tuesday cruise ship travel would be allowed to restart on Aug. 1 from six designated ports. But at the same time, authorities said face masks would be made compulsory for all enclosed retail outlets including hair and beauty salons in a bid to curb a recent increase in COVID-19 cases.

At the eastern end of the Mediterranean, Lebanon ordered a partial lockdown when new coronavirus cases reached the triple digits in recent days, after the country reopened its sole international airport. Consecutive five-day lockdown periods that will shut indoor pools, pubs, malls, banks and nightclubs will start on Thursday separated by a two-day "break" in between.

Lebanon registered 141 new COVID-19 cases and three more deaths on Tuesday. That brought the country's total cases to 4,023, with 54 deaths. 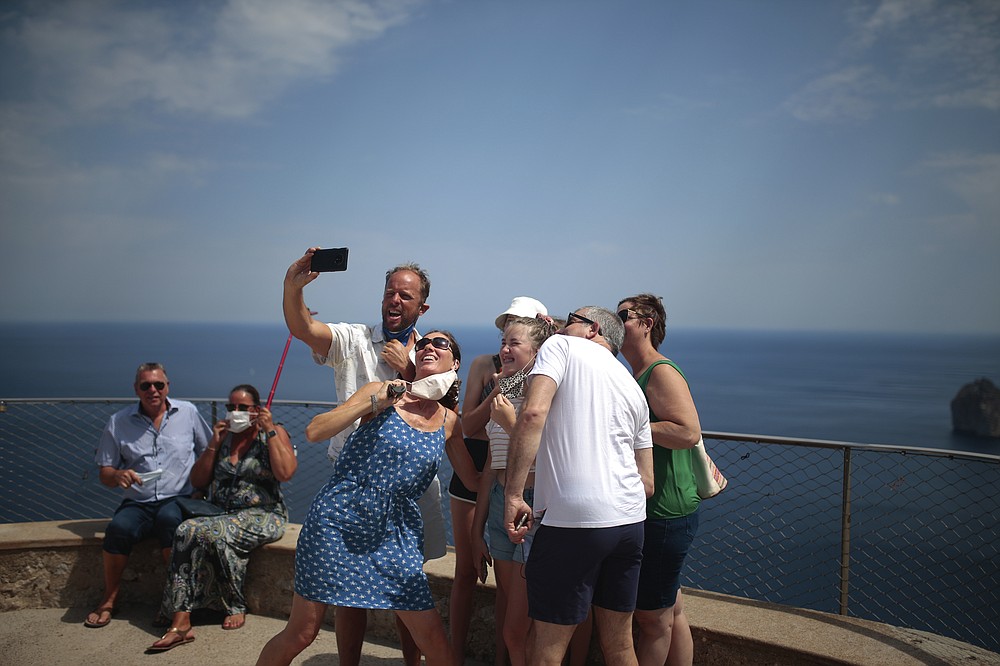 Tourists visiting from the UK take a selfie at a viewpoint in Pollença, in the Balearic Island of Mallorca, Spain, Tuesday, July 28, 2020. Britain has put Spain back on its unsafe list and announced Saturday that travelers arriving in the U.K. from Spain must now quarantine for 14 days. (AP Photo/Joan Mateu) 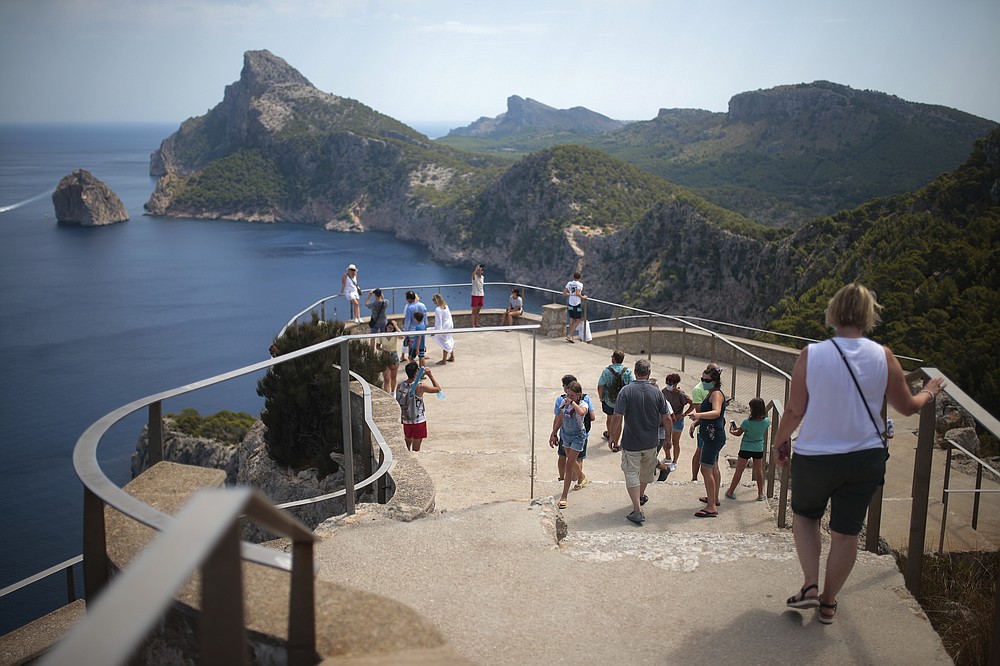 Tourists visit a viewpoint in Pollença, in the Balearic Island of Mallorca, Spain, Tuesday, July 28, 2020. Britain has put Spain back on its unsafe list and announced Saturday that travelers arriving in the U.K. from Spain must now quarantine for 14 days. (AP Photo/Joan Mateu) 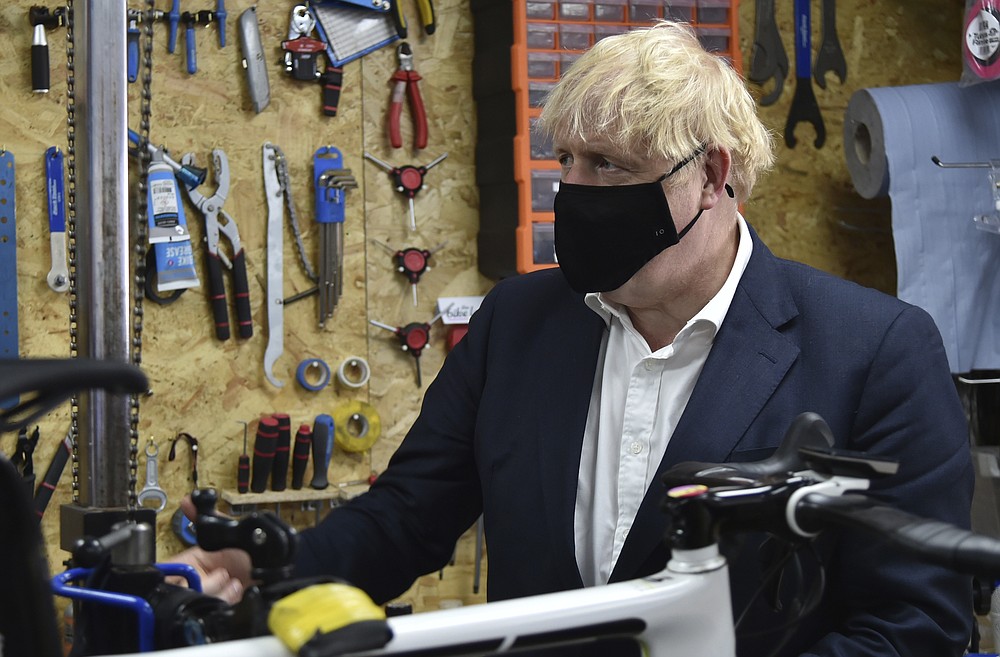 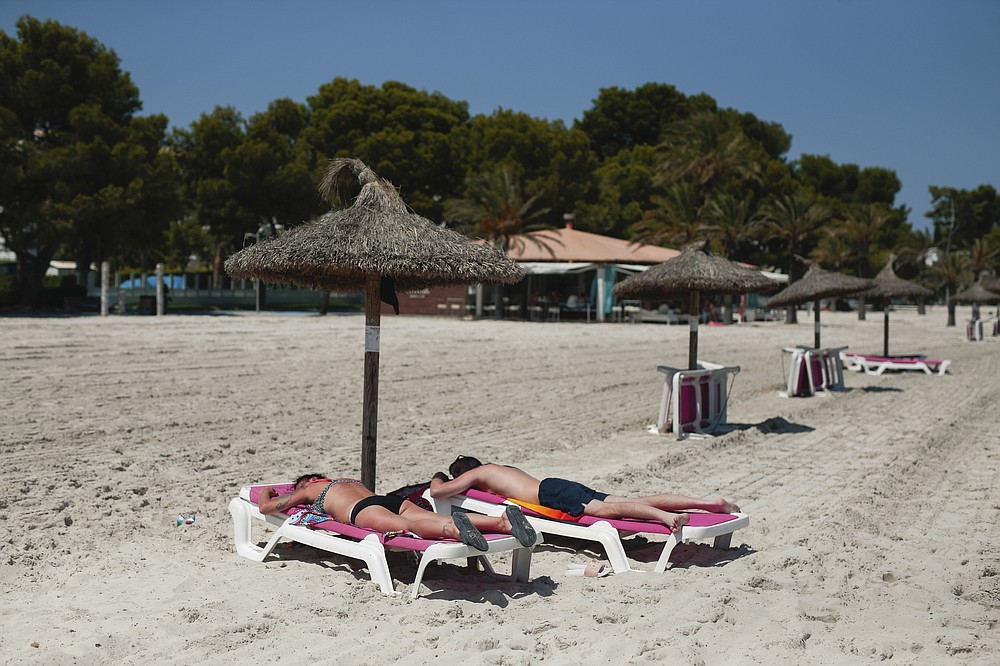 Sunbathers enjoy the beach in Alcúdia, in the Balearic Island of Mallorca, Spain, Tuesday, July 28, 2020. The U.K. government's recommendation against all but essential travel to the whole of Spain means that all travelers arriving in Britain from that country will have to undergo a 14-day quarantine. (AP Photo/Joan Mateu) 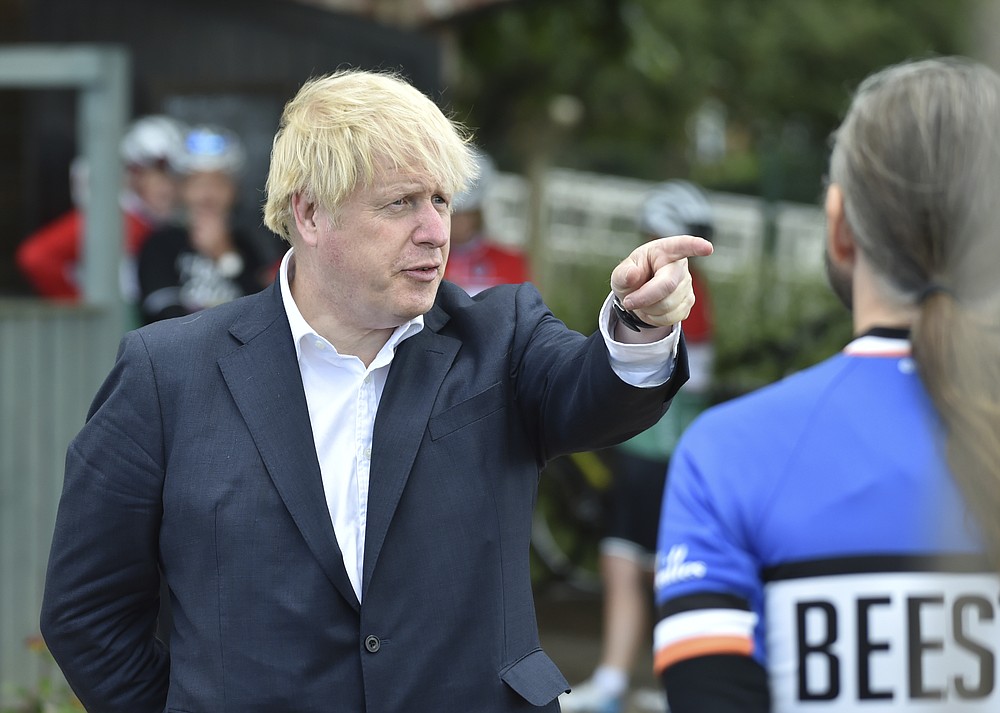 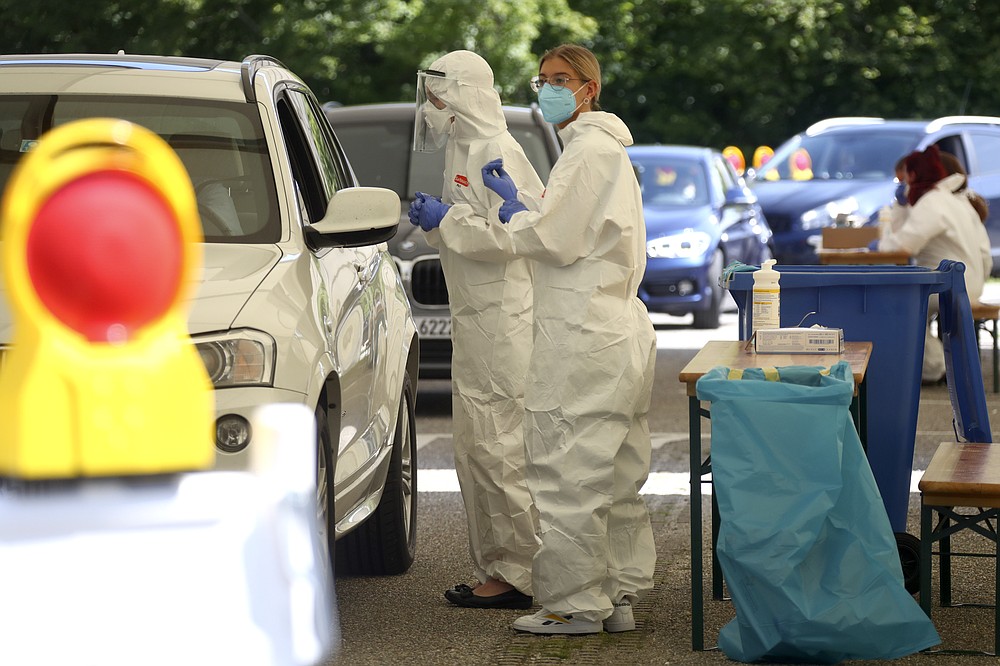 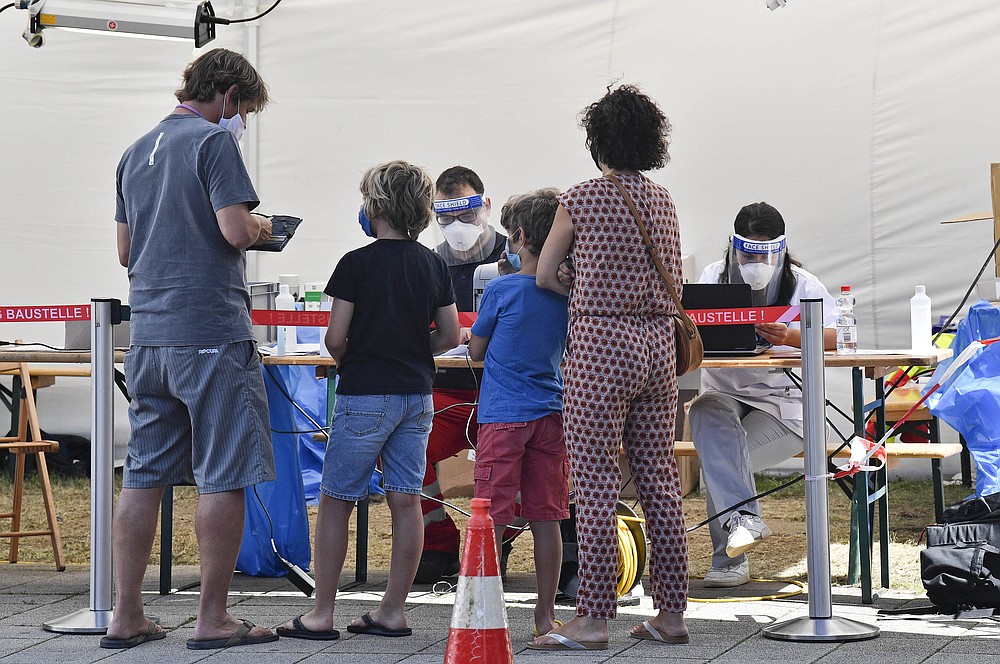 Travelers arrive at a test station to make a COVID-19 test at the airport in Cologne, Germany, Tuesday, July 28, 2020. New test centers for coronavirus are established at German airports due to the pandemic and free corona tests are given for returnees from countries designated as risk areas. (AP Photo/Martin Meissner) 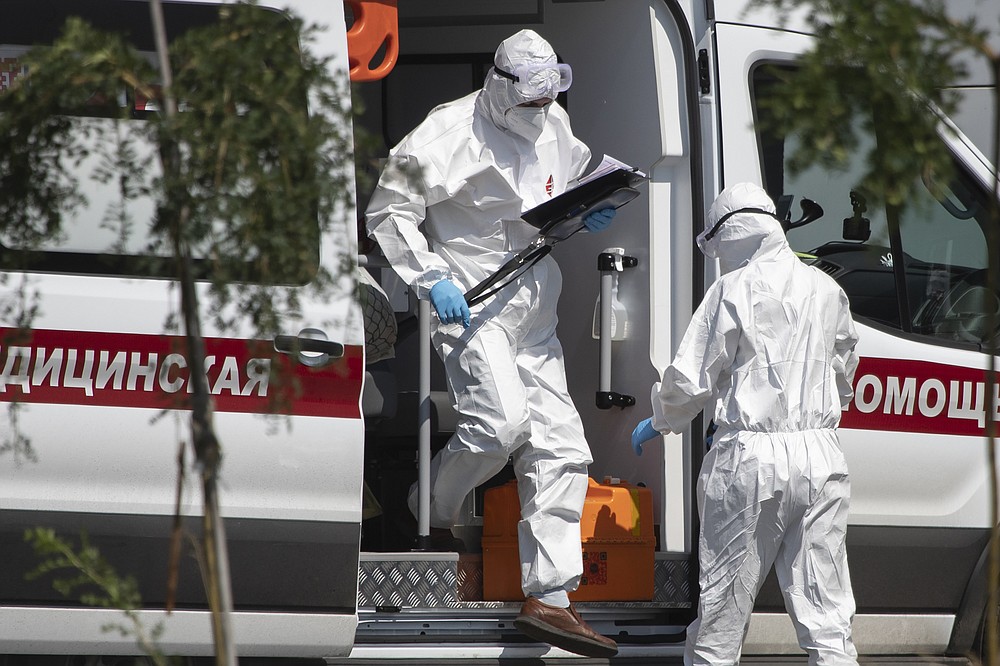 Medical workers wearing protective gear get out from an ambulance as they transport a patient suspected of having coronavirus, at a hospital in Kommunarka, outside Moscow, Russia, Tuesday, July 28, 2020. The number of new coronavirus cases in Moscow has been steadily rising since July 16, when city officials reported over 500 new infections. On July 28, Russia's capital registered at least 674 new infections. (AP Photo/Pavel Golovkin) 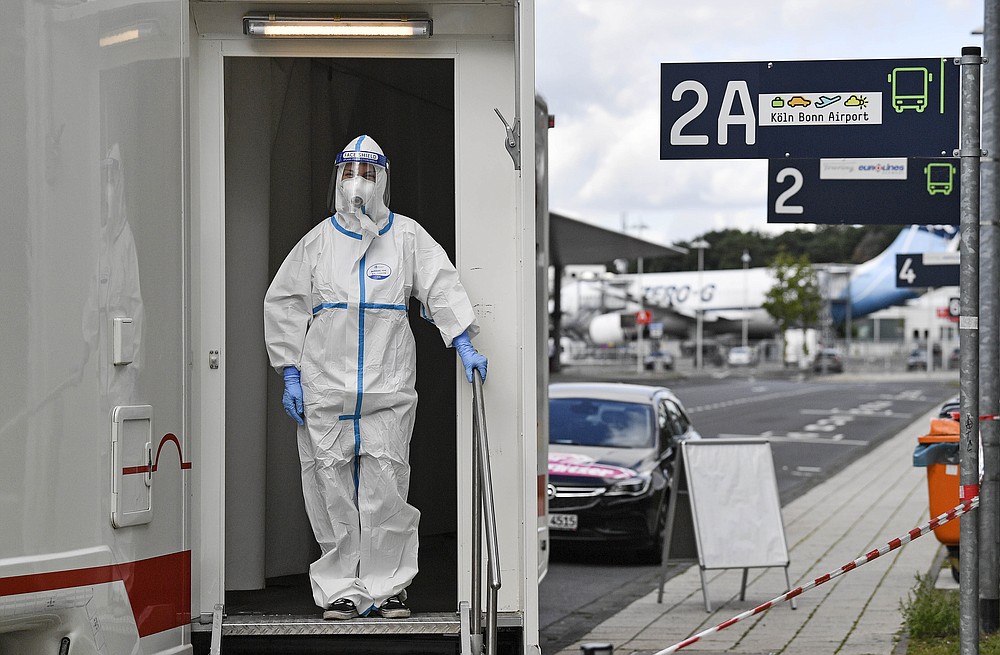 Medical staff wait for travelers to take COVID-19 tests from arriving passengers at the airport in Cologne, Germany, Tuesday, July 28, 2020. New test centers for coronavirus are established at German airports due to the pandemic and free corona tests are given for returnees from countries designated as risk areas. (AP Photo/Martin Meissner)