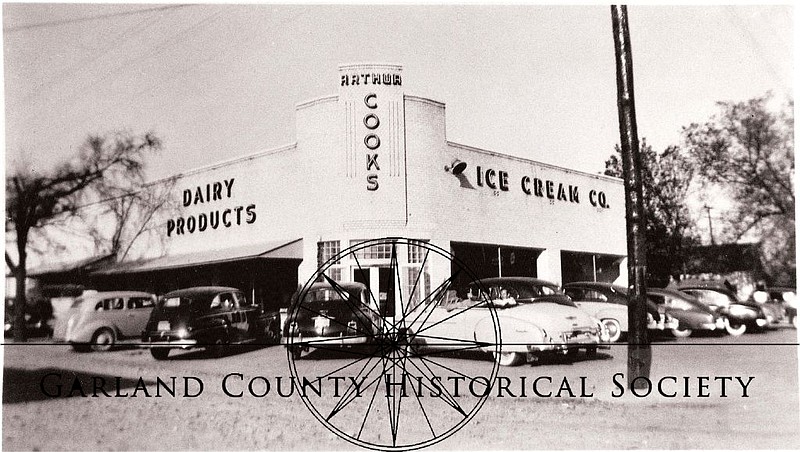 Cook’s Ice Cream, located on Albert Pike until it closed in 1971, was one a numerous drive-ins around Hot Springs that each had their own loyal following a patrons. - Photo courtesy of the Garland County Historical Society

To a lot of people, growing up in Hot Springs wasn’t special because of our famous bath houses or historic buildings. It was special because, on crisp fall nights after the big game or on lazy summer afternoons, they found cold root beer, hot rock ‘n’ roll, and good friends at local drive-ins. So let’s go cruisin’ around town and back in time.

Up on Park Avenue, turn in at Phillips Willow Room and Drive-in, which some say had the first drive-through window in Hot Springs. From 1940 through the 1960s (when The Vapors was built on its site), Phillips was the cool place to be.

Time to rev up the engine and check out the action in South Hot Springs. No way to go past Cook’s Ice Cream on Albert Pike (until it closed in 1971) without stopping for a shake or a sundae. Still hungry? Drive to Albert Pike and Richard Street and get a burger at McBride’s (from 1957-1966). From 1964-1984, you could go a little farther on Albert Pike and get a frosty mug of root beer at the relocated A&W.

It’s time to head back toward town and see who’s pulled into DQ. Since 1950, Dairy Queen at 708 W. Grand has served up burgers, ice cream and good times. Although the original DQ, which was very near the street, was replaced in 1978 by a more modern facility at the back of the lot, the good times have continued.

There were more drive-ins, of course, than we have time to visit today. Most were local businesses, not franchises, and each had a loyal following. Before email and texting and cell phones, meeting friends at a burger or ice cream place was an important way to stay connected. And somehow, of course, in the past, burgers were juicier, shakes were colder, and fries were tastier when we were laughing, gossiping, flirting, breaking up, or just hanging out with the gang at the drive-in.