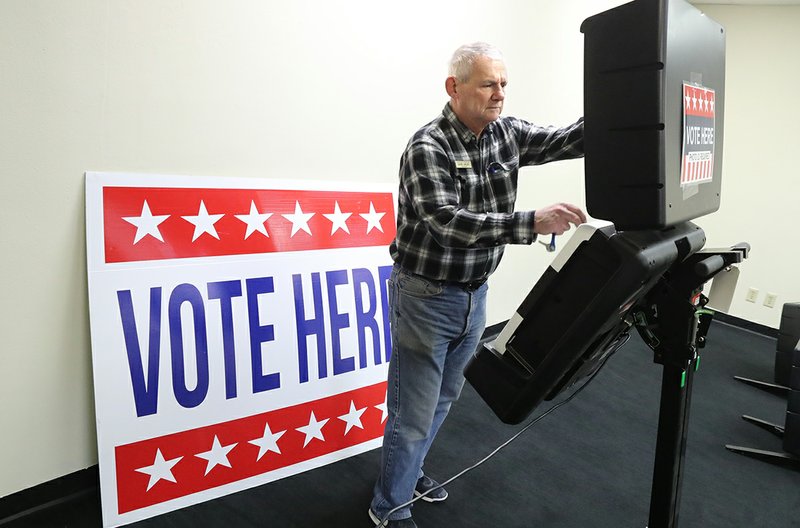 In this file photo Garland County Election Commission Chairman Gene Haley sets up a voting machine at the Hot Springs Mall in preparation for the start of early voting. - Photo by Richard Rasmussen of The Sentinel-Record

Many of us are concerned what the "new normal" will be like as we open the economy back up, and how it will affect our daily lives. Most of us will attempt to avoid large gatherings, at least for the near future, and alter the way we worship, shop, play and vote.

We should all be concerned about how the "new normal" might affect how and when we vote. Some states have made attempts to conduct elections by mail, or what we call "absentee." Arkansas law allows qualified electors (voters) who are "unavoidably absent from his or her voting place" or "unable to attend the polls on Election Day because of illness or physical disability" to request an absentee ballot by mail.

Using emergency powers, by executive order, Arkansas Gov. Asa Hutchinson suspended the provisions of Arkansas Code that pertain to absentee voting for the recent (March 31) runoff elections, allowing any qualified voter to obtain an absentee ballot. Normally, in an election, Garland County would process 1-3% of the total votes by absentee, including overseas and military ballots.

What are the issues with absentee voting?

As early as 45 days before the election, the voter may submit an application for an absentee ballot to the county clerk and then receive a ballot, multiple envelopes, and a voter statement, by mail or in person. The voter must mark the ballot, complete the voter statement, make and include a copy of their approved photo ID, place in the correct return envelopes and apply approximately 70 cents postage. The possible issue is that some voters do not have the resources to provide and send a copy of their photo ID.

Once the county clerk's office receives the voted ballots, they secure them, unopened, for election officials to process. Depending on the volume, the election officials may begin processing the returned absentee ballots no sooner than one week before the election. Processing includes checking the voter signature with the signature on the application and checking for a copy of the photo ID.

In most cases, the voted ballot remains secure in a "ballot only" envelope, with no indication of who cast the ballot, ensuring voter privacy. But in many cases, the voter does not follow the instructions. That can result in their ballot being exposed to the election officials, and a poll watcher appointed by a candidate or a political party. For instance, if the voter put a copy of their photo ID in the wrong envelope, the election official would, by law, open the "ballot only" envelope to check for a copy of the photo ID. If the photo ID is not included, the vote may not count, unless the voter provides the photo ID, in person, within seven days, which negates one of the reasons to vote by mail.

There is no good substitute for "in-person" voting. At the polls, you should feel comfortable that the election official asked your name and compared it and your appearance to your photo ID and you can see that your vote counted when you placed it in the scanner.

For absentee or mail-in ballots, the voter is not present to compare the photo ID with. If someone obtained a photo ID of another person, they could request, forge the signature, and vote an absentee ballot, and that vote may count. Election officials are not signature experts. The risks of fraud are just too great.

During the two weeks of early voting prior to the November election, there could possibly be lines of people waiting to vote. Add social distancing to the mix, and the lines will move slower, and appear much longer. In March, we enforced social distancing and sanitized the equipment between each voter. This did slow down the process, but it allowed voting in-person to the voters that chose to, and minimized possible exposure.

We all want fair and accurate elections, and also all want our vote to count. In-person voting, regardless of the possibility of longer lines, assures us that we can trust the results. I encourage everyone to resist any efforts to promote absentee voting. It's just too risky and the opportunity for fraud is too great. Please do not let fear keep you from exercising your right to vote in person.

Gene Haley is the chairman of the Garland County Election Commission.