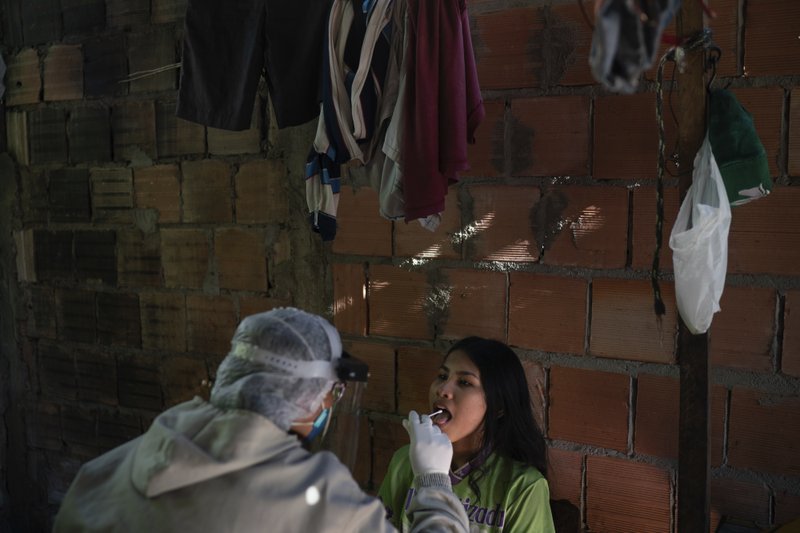 A health worker collects material from Monica da Costa for a COVID-19 test in Manacapuru, Amazonas state, Brazil, Wednesday, June 3, 2020. Several members of the family where feeling symptoms and some already tested positive for the new coronavirus. (AP Photo/Felipe Dana)

LONDON -- A vaccine summit hosted by Britain on Thursday raised billions of dollars to immunize children in developing countries as experts wrestled with the difficult question of how any potential vaccine against the new coronavirus might be distributed globally -- and fairly.

The United Nations and the International Red Cross and Red Crescent Movement have urged that "a people's vaccine" be developed for COVID-19 that would be freely available to everyone, calling it a "moral imperative."

Thursday's event raised $8.8 billion, exceeding its target, for the vaccines alliance GAVI, which says the funds will be used to vaccinate about 300 million children in dozens of countries against diseases like malaria, pneumonia and HPV.

GAVI also announced a new "advance market commitment" mechanism to enable developing countries to get any effective COVID-19 vaccine when available. It hopes to raise an additional $2 billion for that effort, to immunize health care workers as well as high-risk individuals and create a buffer of doses to be used where needed most.

But experts pointed out that the unprecedented pandemic -- where arguably every country will be clamoring for a vaccine -- may make efforts at fair distribution extremely messy.

The worldwide scramble for masks and ventilators that erupted in the early stages of the outbreak -- where France took over the country's mask stocks so they could be given to first responders and others inside the country and the U.S. apparently paid off shippers to redirect ventilators to the U.S. -- are not encouraging signs that there will be much global cooperation if and when a coronavirus vaccine is available.

"Rich countries will most likely try to push their way to the front of the queue, leaving poorer countries at the back, and that's a problem," said Jimmy Whitworth, a professor of international public health at the London School of Hygiene and Tropical Medicine.

"I can't imagine any country saying, 'Africa's need is greater than ours, so they can get the vaccine first and we'll remain vulnerable.'"

The urgency of finding a way to stem outbreaks was evident as the worldwide total of reported virus cases reached 130,398 on Wednesday, the highest one-day total so far in the pandemic, according to a tally by Johns Hopkins University.

Brazil reported yet another record number of deaths -- 1,349 -- bringing Brazil's confirmed death toll to more than 32,500, the world's fourth-highest and considered by experts a significant under count due to insufficient testing.

Ahead of the vaccine gathering, philanthropist Bill Gates said there were potential solutions to the growing tide of vaccine nationalism -- exhibited when the CEO of Sanofi suggested the U.S. had a right to the first doses of any vaccine because of its significant investment.

"The key to that challenge is having scale and having factories all over the world that are making the vaccines," including multiple factories in Asia, the Americas and Europe, Gates said.

Gates acknowledged there could be some benefit to countries that funded vital vaccine research but called for a "system of allocating doses to those most at risk, and making sure that even the countries that can't compete financially for that access, that they're considered -- their health workers, their elderly."

British Prime Minister Boris Johnson said he hoped Thursday's gathering would mark "the moment when the world comes together to unite humanity in the fight against disease."

But Michael Head, a senior research fellow in global health at the University of Southampton, noted that in the past such sentiments have not always been backed by action. "In reality, that can be turned on its head in the weeks and months ahead," he said.

About a dozen vaccine candidates are in early stages of testing in thousands of people around the world. There are no guarantees any will work but there's increasing hope that at least some could be ready by the end of the year. Oxford University is beginning an advanced study involving 10,000 volunteers; the U.S. is preparing for even larger studies in July that involve 30,000 people each testing different candidates, including Oxford's and one made by the National Institutes of Health and Moderna Inc.

Vaccine developers are worried about whether the virus spread is slowing enough in the U.S. and Europe that it will be hard to prove if their candidates really work. So later this month, the Oxford vaccine will be tested on 2,000 Brazilian volunteers in Rio de Janeiro and Sao Paulo, according to the U.K. ambassador to Brazil, Vijay Rangarajan. The U.S. government also is considering test sites in other countries.

While Oxford scientists say they are committed to making their shot available to all who need it at a fair price, academic Whitworth noted "that doesn't square with the rhetoric coming from British ministers funding it, saying U.K. citizens will be at the front of the queue."

And the U.S. has signed a contract with AstraZeneca, which makes the Oxford vaccine, for 300 million doses.

Vaccine makers know they'll be judged if rich countries buy up all their supply. Thursday, AstraZeneca said it would provide 300 million doses of the Oxford vaccine to GAVI's new financing mechanism to try to ensure equitable access. The doses will be provided when the vaccine is licensed or pre-qualified by the World Health Organization.

"I'm thinking very carefully what would be the best way to make sure that everybody will get a fair share of the supplies that exist as quickly as possible and that in this fairness we will not forget the unprivileged countries," said Pfizer CEO Albert Bourla. "From the human perspective they have equal rights."

In the U.S., where a wave of protests is adding to concerns over possible additional outbreaks, new cases have been surging just weeks after many businesses were allowed to reopen. On Thursday, Vegas casinos and Universal Orlando were among those welcoming visitors.

As of Thursday, more than 6.5 million people worldwide have been confirmed infected with the coronavirus and more than 386,000 have died, according to the Johns Hopkins University count. The actual number of infections is thought to be much higher, due to limits on testing and many asymptomatic cases.