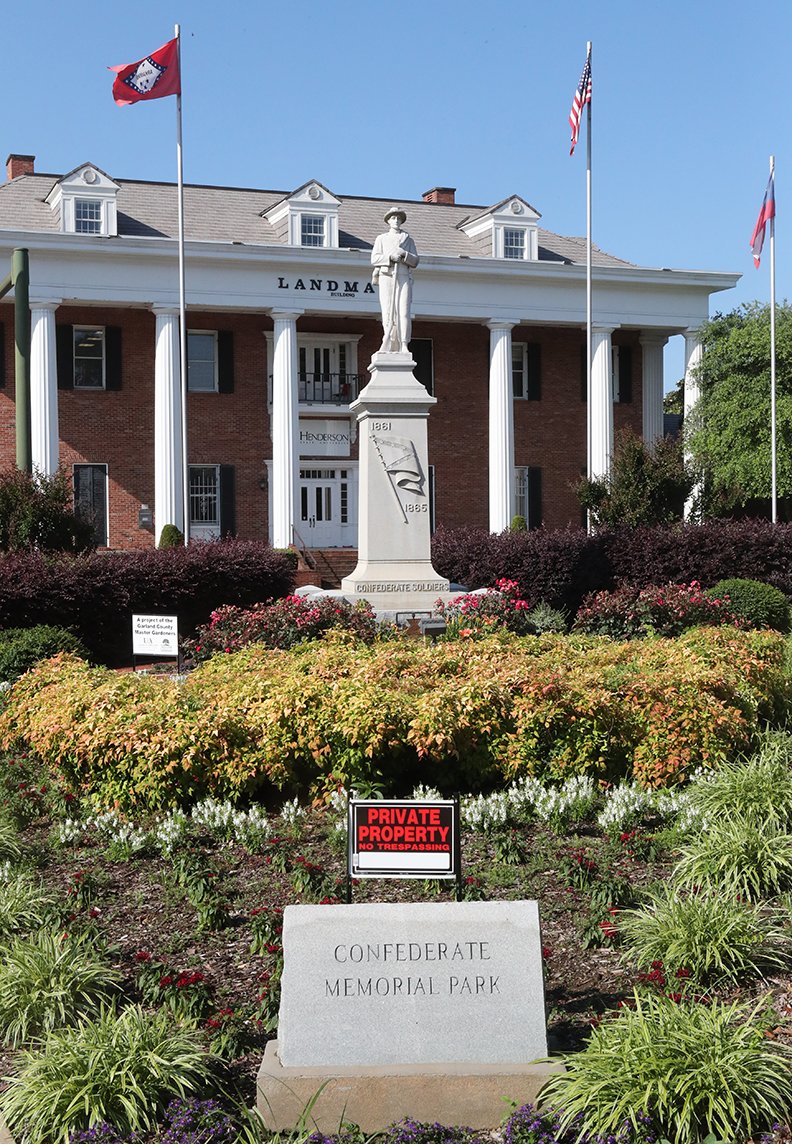 The statue at Confederate Memorial Park, as shown on Friday, June 5. - Photo by Richard Rasmussen of The Sentinel-Record

The debate over whether a Confederate statue located on private property downtown should be relocated continues in the community, but City Attorney Brian Albright says there are only two legal options: the property owners could decide to move it, or the city could exercise its power of eminent domain.

The property, which is owned by the United Daughters of the Confederacy, is reportedly the site where two black men were lynched in the early 1900s, adding to the intensity of the debate, which has grown since the national protests against police brutality following the death of George Floyd.

Albright said a petition like the one currently circulating online could only provide support for wanting to do something with the statue.

"Black folks were just on the wrong end of the stick all that time," UDC attorney Steve Westerfield said, noting that he can understand why the black community may not want to honor the statue.

He said although the UDC doesn't want to offend anyone, "it seems like to not offend some people you just have to disappear and they don't want to do that."

As far as the petition drive, Westerfield said he still doesn't think there would be a reconsideration.

"The daughters own that property and they've taken good care of it and it's a unique piece of architecture and they're proud of their history," Westerfield said. "They're proud of what their grandfathers and great-grandfathers did to defend the state; and certainly don't want to give anybody offense, but sometimes just existing gives people offense. I don't think they believe, and I don't believe, there's a way to conduct yourself and nobody is ever offended by who you are or what you say."

"I think we need to know what our history is so we can appreciate that and you learn from your successes and your mistakes, but if we don't know what those were then we're not going to learn anything," he said.

"It's a great spot to have the statue and the park area around it is well manicured and it's attractive," Westerfield said. "And people, like myself, whose ancestors fought in the war, they're proud of the statue, they're proud of the bravery of their ancestors and it just seems -- and I don't want to put words in anybody's mouth -- but it just seems like people are just wanting to hide their history."

Even if it were relocated, he said he thinks the statue's existence would still be attacked.

"I think they would be after that statue even if there had not been a lynching," Westerfield said.

Elmer Beard, secretary for the Hot Springs chapter of the National Association for the Advancement of Colored People, Unit 6013, said he has been working on the removal of the statue since 2001.

"We disdain and oppose any more tax dollars being spent by the city of Hot Springs to protect a Confederate statue and a Confederate flag on private property," Beard said. "It is still a reflection of hanging and white supremacy and slavery. The NAACP's petition against this is and has been ongoing since 2001."

The tax dollars he said the city has paid to protect the statue were in reference to the city placing dumpsters around it and having law enforcement surround it during a 2017 rally held on Arlington Lawn to preserve the statue.

"The city spent, according to public record ... between $20,000 and $25,000" during the last public demonstration in Arlington Lawn in 2017, Beard said. "They placed bins around it during that demonstration and they had the police department and all other law enforcement combined."

According to a letter from City Manager Bill Burrough sent to Beard, in August 2017, local agencies were notified of a protest that was to be held in downtown Hot Springs in reference to the removal of the Confederate monument.

"There were reports that at some point during the rally, the pro-Confederate group planned to march to the Confederate Square," Burrough said in the letter. "This had the potential to be a flash-point and the potential for violence and property damage was significant following the Charlottesville riots."

"The plan included isolating the square and preventing that area from becoming a flashpoint that could have resulted in an event such as Charlottesville," Burrough said. "The execution of the plan resulted in a peaceful event without violence or property damage." The city estimates around $20,000 to $25,000 in costs were incurred during the event, "which included additional police, fire and support departments."

Beard said the fact the statue is still up makes him feel like he needs more work done from people.

The Hot Springs Confederate Monument, which was added to the National Register of Historic Places in 1996, was made by the McNeel Marble Co. of Marietta Ga., in the early 1930s.

According to the National Register nomination form, the statue, which was dedicated on June 2, 1934, was the result of a nearly 30-year effort by Hot Springs Chapter No. 80 of the United Daughters of the Confederacy to put a Confederate memorial in Hot Springs, which at the time was the only major city in the state without one.

In 1907, "Mrs. J. Davidson Smith" moved to Hot Springs from Alabama, "a state that had already erected many Confederate monuments," and suggested that Hot Springs build its own tribute to its Civil War soldiers. In 1933, the then-Hot Springs City Council passed an ordinance to allow the statue to be placed on what was called Como Triangle at the time. In 1953, the city formally gave the UDC the deed to the memorial plot, according to the nomination form.