Caring for the Community 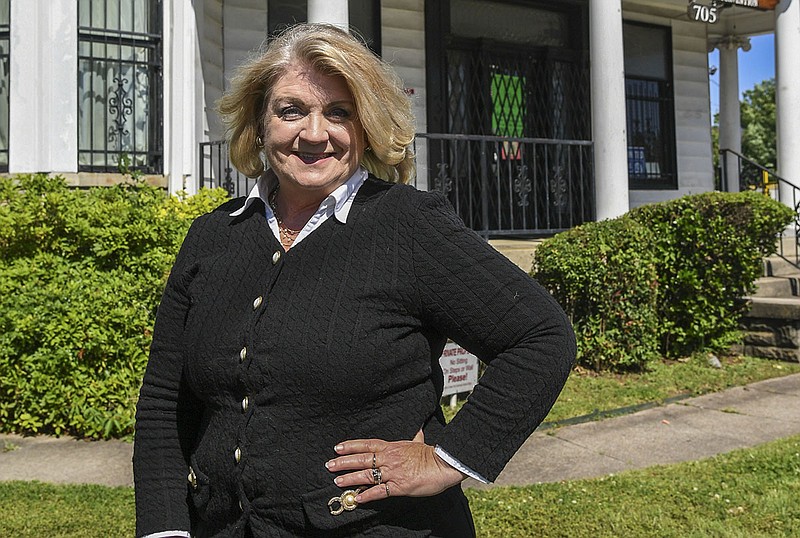 Janie Smith, executive director of the Jackson House has her photo taken on Monday, May 18, 2020. - Photo by Grace Brown of The Sentinel-Record

It does not matter which page of the calendar you turn to, the Eleanor Klugh Jackson House continuously serves the community, even in the midst of a pandemic. At the helm of this vital nonprofit is no other than the founder's daughter, Janie Smith.

For the past 20 years, she has served as the executive director of Jackson House, making sure funding and donations keep coming in while food and items to meet basic needs go out to those most in need. However, due to COVID-19, Smith had to reevaluate how she runs the nonprofit in order to ensure the community's needs stayed met, and her staff and volunteers stay safe.

"We have to think about who we're serving," Smith said. "We have to be here for lunch six days a week. Yes, we have a plan B, but still, we have to provide food. We're doing all of our interviews by phone. We've totally changed the way we've operated."

When the very first cases of COVID-19 in China started making the news, Smith said she began planning for the worst. She began researching and organizing her board members, the "core group," and her volunteers, all while stocking up on supplies she thought they may need.

"Right now in Garland County, nearly one in three people are living at poverty level. That was before COVID, so I don't know what that's going to do. It's sort of scary to think about it," she said.

"We started making plans when I first started hearing about this illness back in like January. I think by February, we were having board meetings with some of the members because I have retired physicians, a current pharmacist, and a certified EMT who helped guide our decisions."

Smith said she immediately began placing orders for personal protective equipment and putting together operation manuals covering everything from how to carry out daily operations to what to do in an emergency situation. She also made the decision to send most of her volunteers home, keeping her "core crew" intact.

"Right now, it's really, really important that we keep our core crew. I sent all my volunteers home. Most of them are considered in the high-risk category because they are older. ... It's not just an age thing, it's a numbers thing. Normally, we have so many people just come through the building volunteering each month. If we were to have a COVID positive, it would knock us out of business for two weeks, if not longer," she said.

Now several months out from the initial panic and newly imposed regulations, Smith says the Jackson House was able to successfully maintain operations, but the changes they made could stay in place permanently.

"We have always operated one-on-one and that's not the case right now. Going forward, we're going to have some changes. We're going to have the screens and the things set up so that we can reduce the chance of spreading anything. We already have one of those lights in the living room. People don't think about that, but the lights they have in the doctor's offices, and then the health departments in places like that kill the germs. ... I had those serviced right before all of this happened, thankfully." she said.

Smith attributes Jackon House's preparedness to her tendency to research, to the experience she gained after the hurricanes in 2005, and to those who volunteer their time and talents. Although operations have changed, the "core crew" at Jackson House continues to serve the community daily.

"I research all the time. I probably don't realize it but even when I'm on Facebook, I'm looking. I know that not everything is true, but I look at something and I research to see if it's true. There are innovative things that come out of social media that you may not hear about on the news otherwise," she said.

Keeping a vital nonprofit such as Jackson House afloat during such uncertain times does not even begin to scratch the surface of all the work Smith does to keep the homeless and "working-poor" families in the community from "fall(ing) off the (hypothetical) cliff and hit(ing) the rocks below."

Smith's father originally founded the nonprofit while she was still in high school. However, it was never her desire to carry on her father's legacy. She decided to carve out her own path as a missionary's daughter to pursue higher education. She initially studied social work and mental health.

"I grew up with Dad in the mission work and really just wasn't interested. I finally agreed that I would just kind of run the business because they needed someone who really knew how to do that. I had already been a director three or four times so, of course, I could do that," she said.

Over the years, Smith has seen the needs increase across the community. Many of the individuals and families she has on file are what she calls "working poor." This refers to individuals and families who work multiple jobs to make ends meet, yet still, come up short from time to time. In response to seeing the growth in need, Smith began working on grant writing and different programs Jackson House could offer to help ease the load.

After learning about the prevalent food insecurity in Garland County, Smith recruited one of the Jackson House Food Pantry volunteers, Ted Thomson, to spearhead Project HOPE Food Bank. This gave the smaller food pantries in churches and nonprofits an affordable way to stay stocked when donations run low.

Her work with the food banks in town has helped create a large network of organizations keeping people in the community fed who would otherwise go without. She also helped facilitate Christmas gift and warmth item drives, backpack drives filled with school supplies that a local church later took on, and created a network of the social service programs offered in the area.

"It's just a lot and it takes all this working together. When somebody calls me now and they have a half a truckload of corn that they couldn't sell locally to the grocers, then I can say, 'You know what? down just down the street is Project HOPE. You can take that there.' She can send out one group email, let everybody know they can all come in there, and they can give all that food away and just have seen a couple of hours," Smith said.

Networking is a large part of her work. If a client comes to Jackson House seeking assistance that Smith cannot provide, but she knows an organization that can, she puts that person in contact with the proper social service program to meet their needs. She is constantly communicating with different nonprofits, food banks, charitable clinics, and those looking to volunteer time and resources.

The summer months, especially, are very busy for the Jackson House. With children out of school, Smith said parents are having to provide child care and at least 14 extra meals per child each week. Many of the people who utilize the food bank at Jackson House are not regulars, according to Smith. They are mostly people who have found themselves in difficult situations brought on by unexpected expenses like car troubles or medical bills.

"I know that the schools have stepped up as far as running their bus routes and they're delivering food. They bring us their leftovers," Smith said. "They have perishables just like any other restaurant. If we don't use it that day, by tomorrow it will be gone. We have a quick turnover."

One of Smith's biggest means of reaching the community is by utilizing Facebook. She will post items needed or items available on her own timeline and in different community groups, and her friends share the post, in turn, spreading the word around town. Typically, the donations they receive are distributed within a day.

"If people donate a car to me, and that's happened several times, I can take that car and I can reach out to someone. If I sold the car, the value would not be really high. But if I take a working car and I call the Arkansas Single Parent Scholarship Fund of Garland County, we can get that car into the hands of a single parent working towards their degree. I can smoothly move that from the donor to the person in need," she said.

The people who come to Jackson House seeking assistance have a broad variety of hardships and obstacles they want to overcome, from disabilities to homelessness, and Smith works to help them all.

"If I can give you food today and it's going to take care of you for a week, you can shift that money that you would have spent on the food, and you can put that in your gas tank so that you can go to work," Smith said. "Or maybe you're a senior citizen, and you can't buy those medicines that you're skipping every other day because you can't afford them. You're trying to make one prescription one month go for two."

"There's all that going on and maybe just eating lunch here every day, saves you a worker $5 a day. By saving that then that goes in your gas tank, or that takes care of your electric bill at the end of the month. You know, all of everything is sort of a barter system anyway. So it's always a matter of shuffling resources to fit every situation and make it better so that they can go."

"If you can give somebody a hand up. It's like if you're about to fall off the cliff; once you fall off the cliff, and you hit the rocks below, you may never climb back up the cliff. But if you can keep that fall from happening, then you never get down in there and get all damaged and destroyed. So even if you're just hanging on by your fingers, if we can keep you from falling off, then you'll be able to gather yourself and move forward."