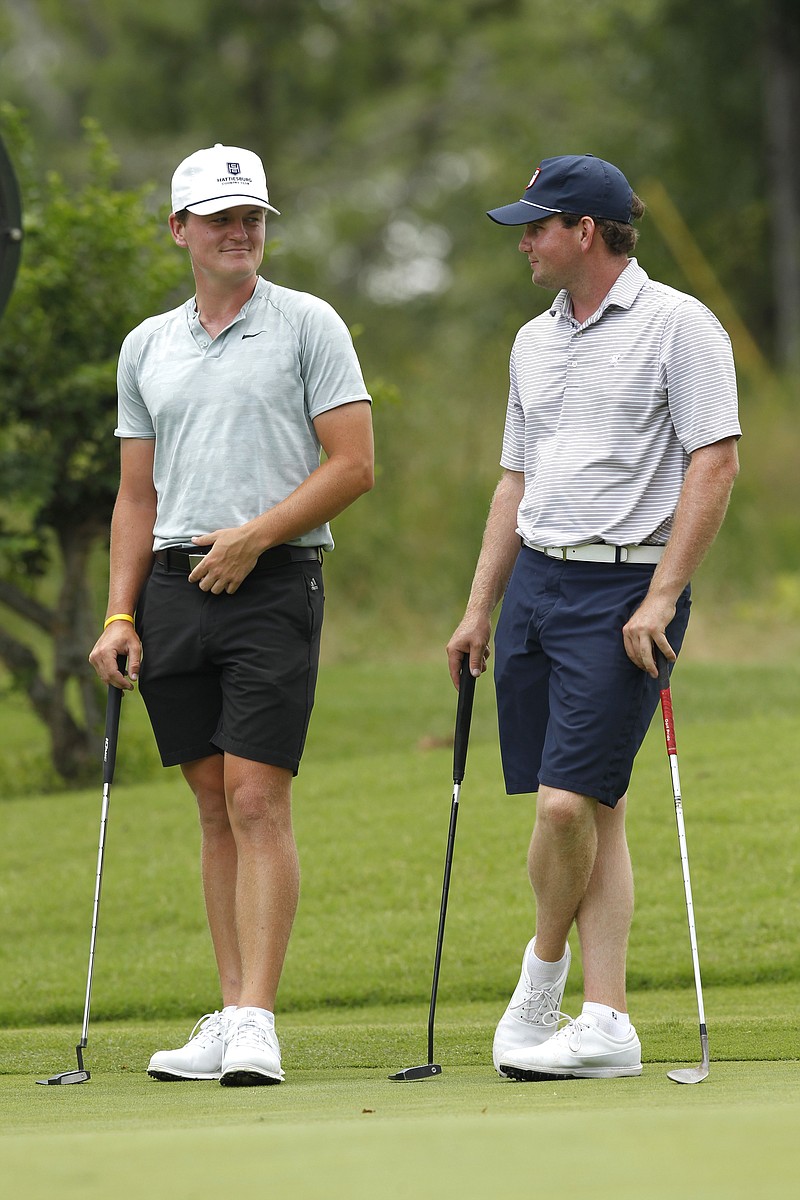 Matthew Cole, left, talks to Luke Long as they wait to putt on the 16th green during the final round of the Arkansas Amateur Sunday at the Hot Springs Country Club. - Photo by Thomas Metthe of Arkansas Democrat-Gazette

Nobody else had anything to hold over Cole, either.

Cole not only bettered his friend Luke Long but also won the tournament by six strokes after a closing-round 5-under 67 left him at 11 under for the championship at Hot Springs Country Club.

Cole -- who was a teammate of Long's at Fayetteville before heading to Arkansas State University, and is now his teammate as a graduate transfer at the University of Houston -- began the day with a two-stroke lead over Long and Logan Stephens of Cabot, but he suffered an early slip with a bogey at No. 2.

He closed the front nine with a 1-under 35 and a three-stroke lead over Long.

Despite Palmer McSpadden of Fayetteville getting to within two strokes after making a birdie on the par-4 10th, Cole was never threatened on his way to a 4-under 32 on the back side.

"After the bogey on 2, I didn't think, 'Uh oh,'" Cole said. "I knew there was going to be one of three options for the front nine. I was either going to separate myself, it was going to get really clustered up, or I was going to lose the lead.

"I was OK with any of the three because on the back nine you can really score well, particularly those last five holes."

Cole sandwiched a bogey at the par-4 13th between birdies at the 12th and 14th to get to 9 under for a five-shot lead. It could have been more when his tee shot on the par-3 11th hole hit the flagstick from 180 yards out, and bounded away 4 feet. He missed the short birdie attempt.

"Yeah, hitting the flagstick like that felt good, but then I didn't notice which way my putt was going there and missed it," Cole said. "I got a couple of good ones there on 12 and 14, so that helped my situation."

Cole slammed the door at the par-3 17th, hitting a pitching wedge from 134 yards to within 15 feet, then burying the birdie putt in the center of the hole to get to 10 under.

Cole wrapped up this year's most prestigious state amateur championship by two-putting for birdie from 25 feet at the par-5 18th.

Long, who chatted with Cole throughout much of the round, managed three birdies to go with two bogeys on his way to a 1-under 71 to finish second at 5 under for the tournament. He knew the championship wasn't meant to be on the back nine.

"I felt we both played well this week," Long said. "He got it going in the second round, the third round obviously. He made some putts the entire round, but really just kept pouring it on there on the back."

Cole said he leaned often on his friend. roommate and teammate last season, his first with the Cougars.

"I really like Luke," Cole said. "Ever since I went to Houston, I've asked him a bunch of stuff. 'Hey, what club did you hit there?' Things like that. I ask his opinion on stuff a lot when we practice. I've learned a lot from him the last year. He's a really good player, so I like being around him because I can learn something."

Cole and Long still have busy golf schedules this summer before reconvening in the fall at Houston. Cole will play at the Magnolia Amateur in Hattiesburg, Miss., while waiting to receive confirmation for entry into the Southeastern Amateur in Columbus, Ga.

While Cole's summer itinerary is more confined to regional tournaments, Long will head back home to play at Blessings Golf Course before going to Carrolton, Texas, for the Southern Amateur, then to Carmel, Ind., for the Western Amateur. He'll wrap up his summer schedule in mid-August playing in the U.S. Amateur at Bandon Dunes Golf Resort in Bandon, Ore.

McSpadden, who won the state junior amateur championship Tuesday at Hot Springs Village, and Josh McNulty of White Hall finished tied for third at 4 under, with Stephens and Ron Whittaker of Little Rock tied for fifth at 2 under (214).

Defending champion Tyler Reynolds of Rogers led a group of four tied for seventh at even-par 216.