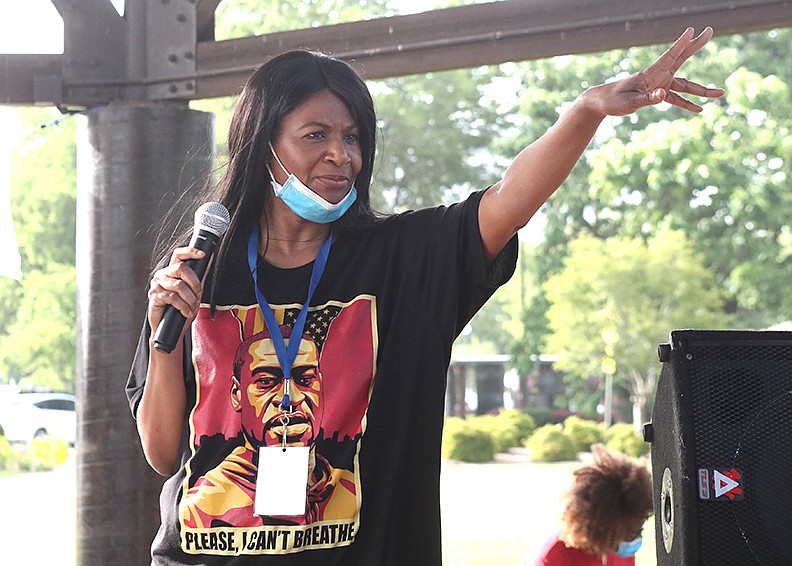 The Arkansas Martin Luther King, Jr. Commission welcomed the aunt and first cousin of George Floyd to the statewide launch of its Get Out to Vote campaign, which commemorates the 55th anniversary of the Voting Rights Act of 1965, in Little Rock and Hot Springs on Saturday.

The public appearances by Floyd's family members were the first they have made since his death.

Floyd, a Black man from Minneapolis, Minn., died while in police custody on May 25 when Minneapolis police Officer Derek Chauvin, who is white, placed pressure on Floyd's neck with his knee for over eight minutes.

"I'm trying to get the message out about how important it is to vote for change," Angela Harrelson, Floyd's aunt, said during the G.O.T.V event held at the Hot Springs Farmers & Artisans Market. "The horrendous act that happened to my nephew was just a nightmare for the whole family and for the whole world. So in order to get things changed, it takes a vote. It takes to have people in the office who have your own morals and background and things you can relate to."

Harrelson, of Minneapolis, said she hopes the movement that her nephew's death has caused with result in a "positive change in the right direction."

"I'm not for violence or anything like that, I just want people to have awareness," she said. "I want people talking about racism, which they are, and I would love to have the police brutality looked at much closer, which it is happening."

In police forces across the country, Harrelson said some policies need to be changed and banned.

"I'm just looking forward for more things to happen," she said. "We've got a lot to be done, but at least we're heading in the right direction because now people are talking about it, now people are aware of it. It's something that no one can deny because that act, what happened to my nephew, changed the world."

Floyd's cousin, Paris Stevens, of Charlotte, N.C., said with her public speaking at the events, she wants to deliver a message of "hope" and "continue walking the walk."

"That means this is not seasonal," Stevens said. "So today, tomorrow, a year from now, we want to keep seeing policies change and see what's effective, what's not effective, changing it; it's a continuum. We can't be complacent. We have to speak up for what's right, and that's everybody."

She said teaching the right practices regarding the destruction of racism starts at a young age. 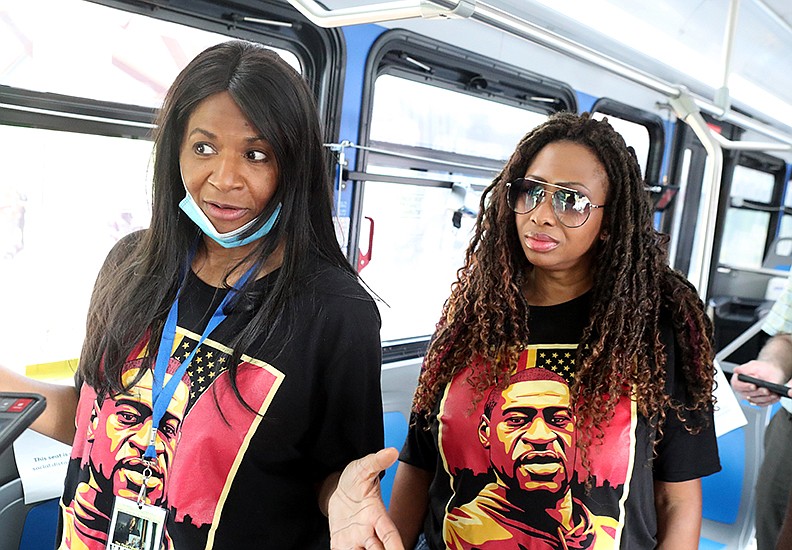 Angela Harrelson, left, of Minneapolis, Minn., and Paris Stevens, of Charlotte, N.C., talk with The Sentinel-Record prior to speaking at an Arkansas Martin Luther King, Jr. Commission Get Out to Vote event at the Hot Springs Farmers & Artisans Market Saturday. - Photo by Richard Rasmussen of The Sentinel-Record

"Your kids don't see race; it's taught, so we want to get back to that where we're just treating each other like normal human beings, just doing the right thing in the continuum of change because the world always changes," Stevens said. "We want to make sure that there's positive change and to continue his (Floyd's) legacy in a positive way."

An event full of powerful messages, music and free grilling, Scarbrough said it's a time to bring awareness and education to community members on the importance of voting.

"This being the 55th anniversary, the historic milestone for the Voting Rights Act of 1965; realizing that it's important to put on a nonpartisan effort initiative to vote, but we can educate and inspire individuals while inspiring them to vote," he said.

The goal of the state's King Commission is to promote racial harmony, multicultural diversity and social equality for all Arkansans, Scarbrough said.

"What's important is the King Commission doesn't teach someone who we want you to vote for or tell you who to vote for, we want you to vote and learn to educate yourself," he said. "We want African Americans to realize that there are so many opportunities in voting and that for many years we didn't have that opportunity to do so. ... We want folks to realize the importance of voting, realize this is an opportunity for your voice to be heard, and for you to be able to speak that into existence through your most fundamental right."