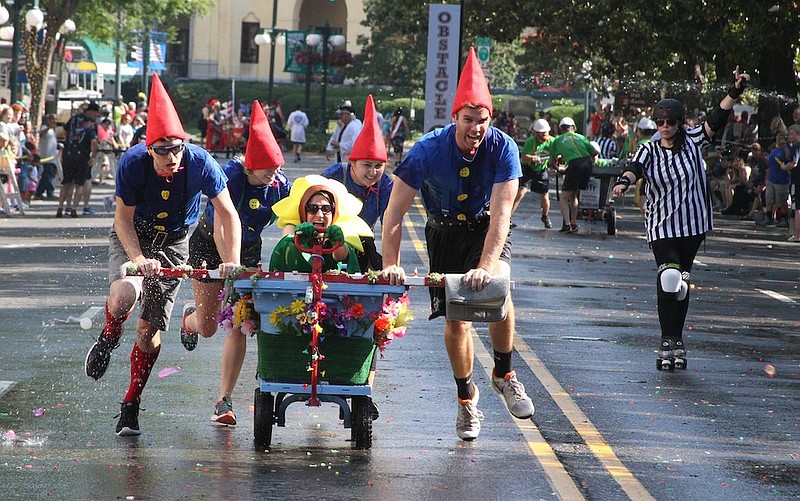 The Austin Weirdos compete in last year's Stueart Pennington World Championship Running of the Tubs. The team was crowned World Champions in the Modified Tub Division. - File photo by The Sentinel-Record

Visit Hot Springs on Monday pulled the plug on this year's Stueart Pennington World Championship Running Of The Tubs, postponing the annual event until 2021 because of the coronavirus pandemic.

The 15th annual event had already been rescheduled from May 30 until July 11 due to the pandemic.

"The increasing number of people nationwide who are testing positive for the virus led us to make this decision," VHS CEO Steve Arrison said. "We really regret having to postpone the bathtub races, but we want to ensure that our citizens and visitors remain safe. The necessity for safe social distancing was something we believed we just couldn't enforce for an event that spans the length of our famous Bathhouse Row."

"We'll announce the 2021 date for the races sometime early next year," Arrison continued. "Meanwhile, we encourage everyone to follow the advice of Gov. Asa Hutchinson and our public health experts and continue to wear face covering and maintain social distancing when out in public."

Bill Solleder, VHS marketing director and coordinator of the races, said Hot Springs will welcome visitors to join Hot Springs residents next summer in what they call "the cleanest event in the state."

The races have been held since 2005 on Central Avenue along Bathhouse Row in downtown Hot Springs.

Sponsored by VHS and The Bathhouse Soapery, The Running of the Tubs is open to teams in the Traditional Tubs Division, the Modified Tubs Division and Stock Tubs, in which undecorated bathtubs are provided for competitors lacking the resources to put together an entry, Solleder said.

"The Running Of The Tubs is a celebration of Hot Springs' historic past when the city proclaimed, 'We Bathe The World!' in its famed natural thermal waters," the release said.

The race is named in honor of late downtown business operator Stueart Pennington, and consists of teams pushing actual bathtubs down Central Avenue, in front of Bathhouse Row.