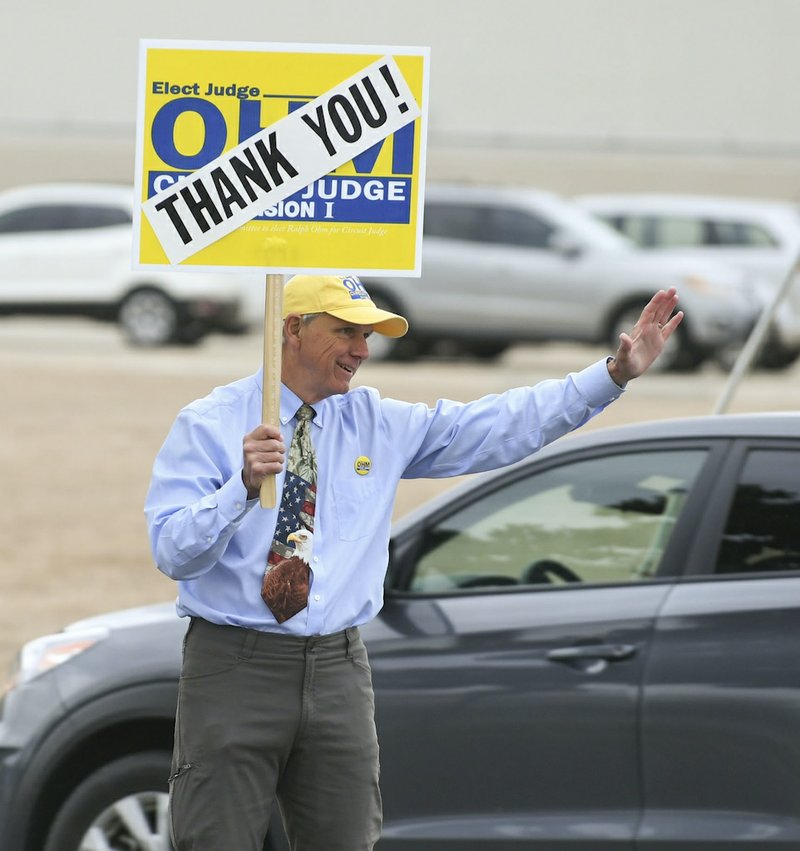 Judge Ralph Ohm stands at the intersection of Grand and Central avenues Wednesday to thank voters for electing him to the circuit bench. Ohm, the Division 2 district judge, won election to the Division 1 circuit seat by a decisive margin in Tuesday's nonpartisan general election. - Photo by Grace Brown of The Sentinel-Record

Justice of the Peace Richard McGrew's constituency will grow from less than 8,000 to more than 30,000 after certification of his unofficial victory in Tuesday's House District 22 special election.

Final but unofficial results had the Piney Republican in front of Hot Springs Village Libertarian Judy Bowers 4,751-2,198, a two-to-one spread putting him in the seat the House expelled Mickey Gates from in October following his no contest plea to felony failure to pay or file state income taxes.

McGrew said he expected to be sworn in after certification. He will represent, through the end of the year, the more than 30,000 people who live in the district comprising northeast and central Garland and north Saline counties. The majority he won in Tuesday's three-way Republican primary set up a rematch with Bower in the November general election to serve the 2021-22 term.

McGrew's 2,696 votes accounted for almost 60% of the primary total. Villagers Jack Wells, 1,419, and Richard Midkiff, 453, failed to prevent him from claiming a majority and avoiding a runoff.

"I'm new at this and have a lot to learn," McGrew, referring to the steep learning curve confronting new legislators, said Wednesday. "I've been asked a lot of questions, and I don't have the answers to many of them yet. I want to thank the voters who turned out and the people in District 22. I want to thank all the candidates for running a clean race."

He represents the Mountain Pine and Piney areas as the Garland County Quorum Court's District 12 JP, a position County Judge Darryl Mahoney said McGrew will have to resign once he joins the Legislature. Mahoney said it's likely that the quorum court will ask for McGrew's resignation at its monthly meeting Monday night.

The county's chief executive said he will recommend two or three people for the governor to appoint to the remainder of McGrew's term, which expires at the end of the year. JP-elect Jeremy Brown will begin his two-year term in January.

"That was actually my JP district, so I know a lot of people out there," Mahoney said. "I'll be reaching out to them in the next few days. It will be a difficult position to be put in, with only eight months to get familiar with the quorum court and committee process. It takes a little while to figure out what's going on."

Garland County Election Commission Chairman Gene Haley said results from all 25 vote centers were in by 8:45 p.m. Tuesday, the earliest he can remember in his time working county elections.

Tuesday marked the fifth preferential primaries or general election the county held on its Election Systems and Software's ballot card system. Its inclusion in a pilot program made it one of the first in the state to use the electronic/paper system. Voters feed paper ballots specific to their precincts into a touch screen, or ballot marking device. Selections are made on the device and printed onto the ballots. Voters put the ballots into a scanner that tabulates results.

Haley said poll workers' familiarity with the closeout process, which includes bringing the flash drive and results tape from each scanner and certification sheets from each vote center to the Election Commission Building on Ouachita Avenue, made for an early night.

Materials from Village Bible Church, one of the vote centers farthest from election headquarters, were the last to arrive.

There were no issues uploading results to the secretary of state's office, he said, unlike in the November 2018 general election when the commission's state-provided laptop could not read the flash drive that had collected data from a scanner that had tabulated more than 7,000 ballots cast during early voting at the Election Commission Building.

The ballots had to be manually scanned, delaying the final upload to the state until after 11 p.m. Haley said he uploaded results from about five vote centers at a time Tuesday night. A surge of returns from more than a half dozen locations allowed about 4,000 votes to be uploaded en masse around 8:15 p.m.

"It was the earliest I can remember," Haley said of the time it took results to be aggregated and uploaded. "I would've bet 9:30. We've used this system longer than anyone else in the state, and we've just got it down pat."

Haley said the commission plans on certifying results on March 13. As of Wednesday morning, it had counted 12 of the 41 provisional ballots. Others were sent to the county clerk's office to verify if the voters are on the voting rolls. Those whose votes aren't counted will be notified by mail and have a chance to appeal the commission's ruling prior to certification later this month.

Haley said no reports of long lines or voters having to spend an inordinate amount of time at the polls were voiced to the commission. The bottlenecks that did occur resulted from voters having difficulty selecting a ballot. Some wanted to vote in both the Democratic and Republican primaries.

"This election the slow down was checking in with the tablet," he said, referring to the electronic poll books poll workers use to verify voter registration and that the voter has not already cast a ballot. "People were having trouble picking which election they wanted to vote in. They don't understand the primary process. They want to come in and vote for everybody."

Early turnout topped election day turnout, upsetting the commission's prediction that voting would be heavier on election day than during early voting.

The county has more than 62,000 registered voters. Haley said he suspected rainstorms that had been forecast for Tuesday may have depressed election day turnout.

Ballots listed school millage rates despite no area school districts putting a rate increase to voters in Tuesday's elections. Haley said per the state Constitution, districts are required to put their tax rates on the ballot even if no change is being proposed. The tax is levied no matter if voters approve or reject it.

"We have to allow them to vote for or against it," he said. "If you vote against it, it means nothing. When we had stand-alone school elections, we had low turnout. Now it's on the primary election, where everybody sees it, they say, 'what's this?'"