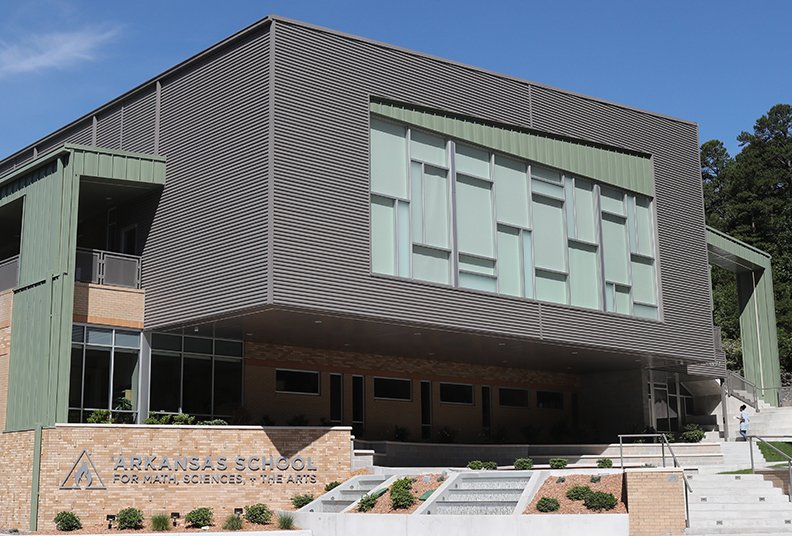 An unidentified woman walks into a building at the Arkansas School for Mathematics, Sciences, and the Arts on June 10, 2019. - Photo by Richard Rasmussen of The Sentinel-Record

A review of financial records of the Arkansas School for Mathematics, Sciences, and the Arts and associated nonprofit organizations that was released at the end of January addresses, point by point, concerns raised at a Board of Visitors meeting in May 2019.

In each case, the report included no findings against ASMSA, the director, or other employees, the school said in a statement released this week.

"The report examined comprehensively the claims raised by members of the public as well as a former employee, and those claims were found to be without merit. Had any item addressed been of concern to the auditors, it would have resulted in a finding. ASMSA would have been obligated to respond to the finding's causes as well as articulate steps the school would take to prevent future issues," the statement said.

The report by Arkansas Legislative Audit is dated Jan. 24 and addressed to the members of the Legislative Joint Auditing Committee.

The objectives of the review were threefold: to determine if several complaints and allegations were substantiated; to provide information related to the ASMSA Foundation Fund and its relationship to the UA Foundation; and to disclose information involving other issues, including transactions with the director and his wife.

It notes that "numerous concerns" were discussed at the Board of Visitors meeting in May 2019 and conveyed to members of the General Assembly, the president of the University of Arkansas System and the media.

Officials from the University of Arkansas and ASMSA appeared before the Legislature's Joint Performance Review Committee for nearly two hours in November 2019 to address allegations raised against the school and a subsequent external review.

That was followed by an appearance before the Legislature's Joint Auditing Committee on Jan. 24 to address the allegations made against the school and to present a subsequent external review requested by state Rep. Mark Lowery of Pulaski County.

"The claims investigated through this legislative audit stem largely from a letter to the editor submitted by A.K. Merit and published in The Sentinel-Record, and then claims later submitted to the joint performance review committee and a letter by a former ASMSA employee," Corey Alderdice, ASMSA director, said in February.

"Any institution's hope is that an audit will have no findings, which is what we received last month in the report. Had there been findings those findings would be expressly reported," he said.

At its May 13, 2019, meeting, the Board of Visitors recognized several individuals, both attending in person and by video conference, who conveyed complaints and allegations involving ASMSA policies and personnel. At the request of a board member, those remarks and a recording of the meeting were transmitted to the UA System president and the chair of the UA System Board of Trustees, according to the review.

Subsequently, the UA System president requested an independent review of ASMSA and issued a letter to ASMSA parents, faculty, staff, and alumni on Sept. 9, 2019. According to the letter, the evaluator reviewed numerous ASMSA documents and policies; interviewed students, staff, and faculty; and concluded that the majority of allegations were unfounded, unsubstantiated, or based on inaccurate or incomplete information. Allegations that the evaluator reviewed included the alleged sexual assault of a student and racism, classism, bullying, and mistreatment of students by staff. The evaluator provided applicable UA System staff with feedback on ways to improve the ASMSA experience for both students and their families.

"The evaluator concluded that many of these concerns were the result of incorrect assumptions based upon a lack of all of the facts of a particular situation. The evaluator was unable to find any support to substantiate complaints that the Residence Life staff or any other employee either individually, or collectively, mistreated or acted inappropriately towards any student," said the Sept. 9, 2019, letter from Donald R. Bobbitt, president of the University of Arkansas System.

Alderdice said the alleged sexual assault incident occurred in a classroom that was witnessed by multiple individuals, along with the two individuals directly involved.

"The facts of the matter were very clear that the event did not necessitate a call to the Child Maltreatment Line, nor did it constitute sexual assault," he said.

"The evaluator determined that the ASMSA officials involved in the investigation were correct in their assessment that there was no obligation to report the allegation to the Child Abuse Hotline since it was determined that the conduct described by the student did not meet the definition of sexual abuse or other similar conduct under the Child Maltreatment Act," Bobbitt said in a letter to ASMSA parents, faculty and staff and alumnus.

Lowery, in an interview last month, said as a legislator he never raised any concerns about finance irregularities. His concern was about the administration of the school, with many of the issues that have been covered before.

"There are still a number of legislators that are not satisfied with how the school is being academically administrated. We have no problem with the academic success of the school just the way the issues related to the residential life program," he said.

"I still feel that there are issues of transparency to parents. Many parents feel like that they are excluded in terms of knowing what is going on at the school with issues related to their children and that is one of the issues that I have raised to Director Alderdice and UA System President Bobbitt," Lowery said.

"They need to recognize that these are minor children. They are still under the guardianship of their parents. The parents have rights to know what is going on at the school. Based on (the) conversations with some parents, who are constituents, they still have dramatic concerns about (whether they) are being given full access to information related to how the school is run," he said.

State Sen. Alan Clark, R-District 13, told the school officials during the committee meeting "scholastically, I give you an 'A.'" but with "handling situations with kids," Clark said he gives the school a "D."

Lowery said that he still agrees with the comment about the school "handling situations with kids" by Clark because of issues related to housing the students and attending to their day-to-day needs. He also agrees with Clark's first statement with the school having an "A" scholastically, because he feels that there is not a legislator that is not impressed with the students' academic success.

Alderdice said the school is working to bridge the distance between the institution and parents and guardians. "These families value education. They are often parents who have been directly involved in the culture and learning in their local sending school," he said.

The primary way that the school is looking to bridge the distance is with further engagement with the parents association and specifically the creation of a Parent Advisory Council. The school has also added Possip, an online platform that sends out bi-weekly engagement surveys to parents, he noted.

"This is on ASMSA part a direct call to parents to say let (us) know what's going on from (their) perspective," Alderdice said.

He said in terms of the students' experience is that the school is looking at the residential staffing structures. "For the last couple of years, we have been looking at what is the appropriate level of staffing and the type of personnel that best meets our institution's needs," he said.

The school is modifying six of its student life positions that will begin advertising on Aug. 1, 2020. The official title will be Residential Experience Coordinators, he noted.

"There will be positions that require a master's degree and previous residential experience in either a secondary or post-secondary environment. Ultimately, these will be professionals who understand the nature of residential living as a career or even as a discipline. These individuals will bring to the table specific expertise to residential living," Alderdice said.

The key findings in the Arkansas Legislative Audit report include the following:

"The UA Foundation is the custodian of donations made on ASMSA's behalf as well as financial record keeper. According to the ASMSA Finance Director, ASMSA maintains a Foundation Fund to track donations to and related expenditures by the UA Foundation on its behalf. To expend donations, ASMSA submits a request form, approved by the Director, and supporting documentation to the UA Foundation. Then, the UA Foundation either pays the applicable vendor directly or reimburses ASMSA for vendor payments already made," the report states.

"We obtained a list of payments that the UA Foundation made to or on behalf of ASMSA and traced all payments to ASMSA bank deposits and records without exception. A review of payments made on behalf of ASMSA indicated six payments totaling $5,070 were made to the Director during the period July 1, 2018, through December 5, 2019. According to ASMSA personnel, these payments were reimbursements for entertainment type expenses to promote the school and its mission. "

• Education level of the director.

The ASMSA director is required, "at minimum," to have a master's degree. A doctorate is preferred, but not required. Corey Alderdice, the director, has a master's degree. His job offer and acceptance letter states he would receive a $10,000 salary increase if he obtains a doctorate degree, but it is not mandatory.

• Payments to director's spouse or business.

"We determined that ASMSA did not make payments to the Director's spouse or to a business (Company) she owns. According to its website, the Company provides advertising, branding, social media, and public relations services. During 2018, ASMSA hired an individual, who works for the Company, to update and redesign ASMSA's website. This individual was paid $8,000 for this project: $4,800 in 2018, which was reported as contract labor on an Internal Revenue Service Form 1099-MISC, and $3,200 in 2019 when the project was completed."

During the 2018 fiscal year, the school had 129 positions appropriated. Twenty-three staff members voluntarily resigned from their positions, and three were terminated with cause.

"The number is certainly higher than we would like. We certainly believe that ASMSA offers an environment where employers can grow in their profession and their careers. Certainly, it is a great environment to work around to engage students and colleagues," Alderdice said in an interview in February.

"In our assessment of those numbers, 13 of those departures were in result of articulate opportunities for advancement in their employment or job prospects that better aligned with their overall career goals. The majority of these positions are entry-level positions, and we like to believe that the school provides focus with opportunities to build out their skill set and when possible, advance in additional areas in their career," he said.

Seven of the staff members out of the 23 left because of personal reasons, Alderdice noted. "The important thing is none articulate a dissatisfaction of ASMSA as the reason for their departure."

Alderdice's wife accompanied him on three out-of-state trips and one out of the country to Japan.

"According to the Finance Director, ASMSA did not pay for any travel expenses incurred by the Director's spouse, and we confirmed this assertion for the two trips taken after June 30, 2015."

Travel costs for former Secretary of State Hillary Clinton, who was the keynote speaker at ASMSA's 25th commencement on May 25, 2019, were paid through the UA Foundation.

"The Director indicated that a speaking fee would not be incurred and that travel costs would be paid through the UA Foundation, which we verified."

"A list of vehicles owned and insured by ASMSA was provided by the Finance Director. Of these eight vehicles, five were in the general vehicle pool, one van was designated as emergency transportation, one truck was for maintenance use, and a 15-passenger van was for student group activities. These vehicles were non-luxury models."