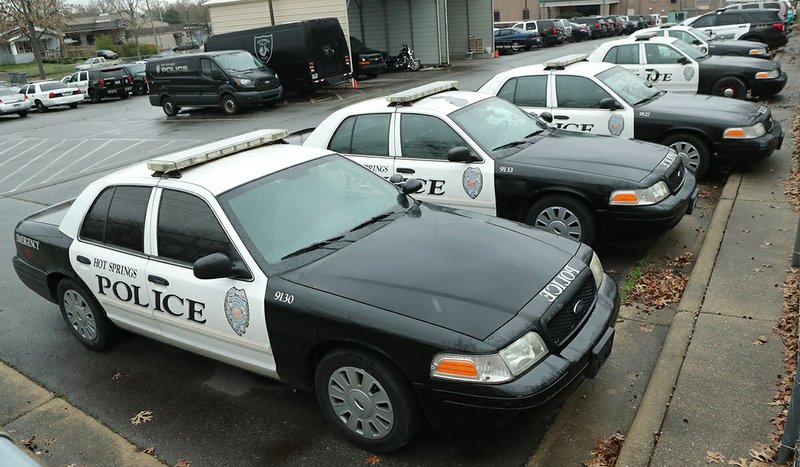 The Hot Springs Board of Directors authorized the purchase of 24 new vehicles last week through the state and local government syndicate that uses its buying power to negotiate lower prices, including 11 for the police department.

The almost $400,000 for the Ford police interceptor sport utility vehicles accounted for most of the $701,492 expense allocated across the general, police, fire, stormwater, wastewater and utility administration funds. The board authorized the purchase of six Ford SUV police interceptors last year as part of the 16 new vehicles approved for the city's fleet in 2019.

Short-term financing available to local governments will pay for the more than $540,000 from the general, police and fire funds. The board adopted an ordinance last month approving U.S. Bancorp Government Leasing and Finance to carry the five-year loan at an interest rate 41 basis points above the five-year Treasury note.

In addition to vehicles, the $1.36 million loan is financing renovations to the former Entergy Arkansas Inc. business office the city bought last year at 324 Malvern Ave. The finance department, utility billing services and the city attorney's office will be relocated to the vacant upper Malvern Avenue building later this year.

The Ford SUVs selected for the police department have a $34,820 base price, according to pricing sheets presented to the board. The hybrid model has a $35,668 total cost. Eight have a $32,978 cost, and two are priced at $33,623. The city's fleet department said the hybrid model's 3.3-liter engine averages 24 miles to the gallon. The non-hybrid gets about 16 to 18 miles to the gallon.

The fleet department said the hybrid will be assigned to the criminal investigation division. Based on its performance, hybrids could be assigned to the patrol division in the future. The hybrid engine is listed as a $2,300 option on the pricing sheet presented to the board.

The fleet department said there are about half a dozen hybrids in the city's fleet, mostly in the planning and transit departments.