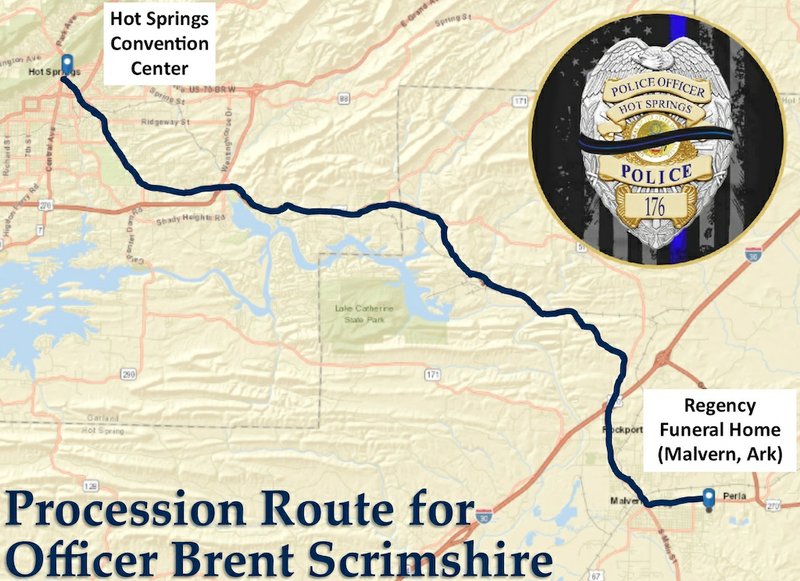 The funeral for Hot Springs police Officer 1st Class Brent Scrimshire, who was killed in the line of duty Tuesday evening, will be held at Bank OZK Arena but limited to 200 guests due to coronavirus concerns, although there will be a number of ways the public can pay their respects.

• "Lying in state," 11 a.m. to 1:30 p.m. The public will have the opportunity to enter the Hot Springs Convention Center at a designated entrance and walk through Horner Hall to pay respects to Scrimshire.

• Private ceremony, 2 p.m. "Following state and health official recommendations on public gatherings," a limit of 200 guests will be allowed in Horner Hall for the ceremony and will include Scrimshire's family and his "direct police family" -- Hot Springs Police Department personnel only.

The ceremony will be livestreamed on the city's YouTube channel at http://www.youtube.com/cityofhotsprings.

• The procession and interment will follow the ceremony and private family viewing. It will proceed from the Hot Springs Convention Center to Oakridge Cemetery in Malvern.

"This schedule is subject to change based on the ongoing coronavirus outbreak and response. The Hot Springs Police Department continues to work closely with the Scrimshire family, City Hall and other officials to follow recommendations from the governor's office and the Arkansas Department of Health. In doing so, the importance of public safety is being weighed against the need to honor Ofc. Scrimshire and allow the community to pay respects," Cpl. Joey Williams, the department's public information officer, said in a post on the department's Facebook page Friday evening.

"We are inviting the public to line the route to honor and show support for Officer Brent Scrimshire and his family," Williams said.

The first procession will leave Regency Funeral Home in Malvern at 10 a.m. and proceed to the convention center on Highway 270 east all the way to the center.

The service was originally going to be held at First Baptist Church, 2350 Central Ave., but because of the expected large attendance was moved to the convention center.

The U.S. Honor Flag will be brought to Hot Springs for the ceremony, a news release said. United Airlines will be escorting the flag from Tampa, Fla., to Little Rock via Houston on Sunday, and it will then be transported to Hot Springs via ground transportation.

The U.S. Honor Flag is one American flag that has traveled millions of miles since 9/11. It has traveled to the battlefields of Iraq, Afghanistan, traveled aboard the last space shuttle launch in 2011 and has honored thousands of American Heroes in law enforcement, fire, EMS, and members of the U.S. Armed Forces, the release said.

Scrimshire, 33, was shot and later died from his injuries following a traffic stop in the 100 block of Kenwood Street around 6:30 p.m. Tuesday. Kayvon Moshawn Ward, 21, the alleged shooter, and Coriama Hernandez, 20, were both charged Thursday with capital murder and aggravated assault on a law enforcement officer.

Hernandez was already in custody on an Arkansas State police hold when she was served with the warrant and Ward, who had been hospitalized for injuries he received, was released from the hospital late Thursday and booked into the detention center shortly before 10 p.m.

Garland County Prosecuting Attorney Michelle Lawrence indicated Thursday she plans to seek the death penalty against both Ward and Hernandez in Scrimshire's murder.