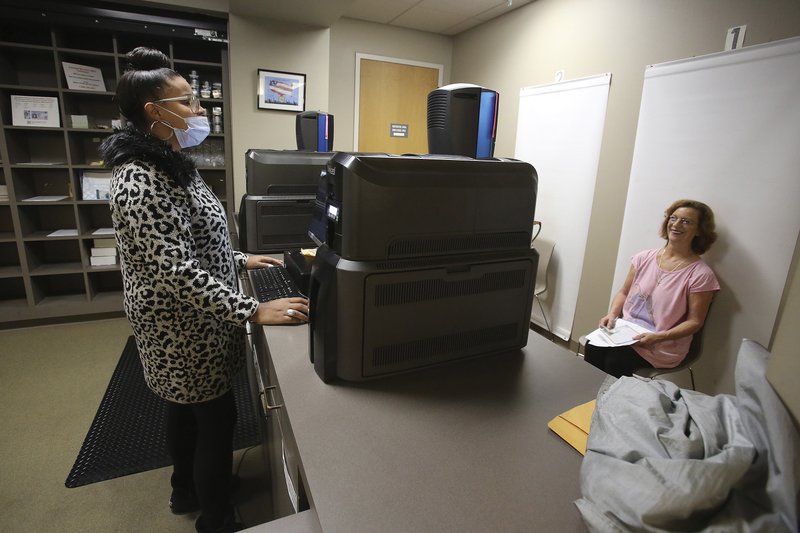 Service representative Lisa Norwood, left, wears a mask as she takes a driver's license photo of Jamie Easton, of North Little Rock, at the Central Revenue Office in Little Rock on Wednesday. - Photo by Thomas Metthe of the Arkansas Democrat-Gazette

LITTLE ROCK -- Gov. Asa Hutchinson said Thursday that Arkansas' schools will remain closed for an additional three weeks and he banned sit-down service at all restaurants and bars, as the number of COVID-19 cases in the state nearly doubled in one day.

Hutchinson detailed the new restrictions as health officials said the number of cases of the disease caused by the coronavirus rose overnight from 37 to 62.

"We're really separating what we need to be doing with what is optional to be doing in trying to reduce the risk of community spread and exposure, particularly of our vulnerable population," Hutchinson said.

For most people, the virus causes only mild or moderate symptoms, such as fever and cough. For some, especially older adults and people with preexisting health problems, it can cause more severe illness, including pneumonia.

The vast majority of people recover from the virus. According to the World Health Organization, people with mild cases recover in about two weeks, while others could take three to six weeks to get well.

The state's public schools, which had been set to reopen on March 30 after a two-week closure, will now remain closed until April 17, Hutchinson said.

Starting Friday, restaurants will be allowed to offer only take-out, curbside and delivery service, he said.

"Please get your food and go home. ... For now, this is our new normal," Little Rock Mayor Frank Scott said earlier Thursday as he announced identical restrictions for his city.

Because of the dining restrictions, the state is temporarily allowing restaurants to sell beer and wine for takeout or delivery with the purchase of food. The emergency rule will also allow curbside service and delivery by liquor stores.

In Little Rock, Scott said the city will allow the restaurant and bar facilities to be used for other purposes such as specialty grocery stores, as long as the maximum occupancy doesn't exceed 10 people.

Gyms in the state were also closed for non-essential services.

The governor also said the state will move to telecommuting, with on-site work limited to employees needed for the proper function of government. He also ordered hospitals, clinics and mental health facilities to screen staff and visitors for temperature and potential symptoms of the virus.

Hutchinson said students will still be taught through alternative instruction methods during the closure. Education Secretary Johnny Key said officials haven't made a decision about standardized testing because of the closure but will likely have an answer in the next several days. Several states that have closed because of the outbreak have canceled their tests.

Before Thursday, Hutchinson had said he didn't see a need yet for ordering restaurants and bars to close despite other states taking that step. Little Rock on Wednesday began enforcing a curfew from 12 a.m. to 5 a.m. Fayetteville, in northwest Arkansas, had imposed restrictions on restaurants and bars that prohibited them from filling at least half their capacity.