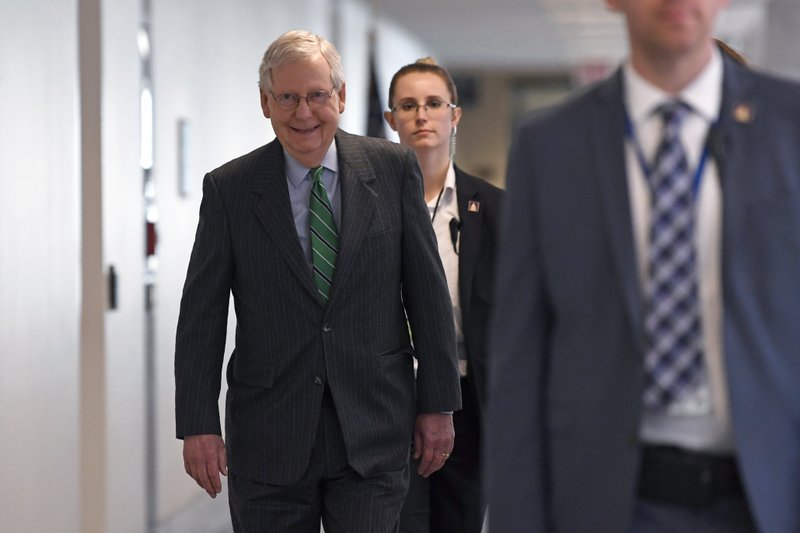 WASHINGTON -- Senate Majority Leader Mitch McConnell proposed direct payments of $1,200 per person and $2,400 for couples as part of a sweeping Republican response to the coronavirus outbreak, according to a copy of the legislation obtained by The Associated Press.

The GOP leader unveiled his plan Thursday as Congress raced to craft a $1 trillion rescue package to shore up households, healthcare and the U.S. economy amid the pandemic crisis and nationwide shutdown that's hurtling the country toward a likely recession.

"We need to take bold and swift action as soon as possible," McConnell, announcing his plan on the Senate floor.

It's an opening salvo in fast-track talks with Democrats as President Donald Trump urges Congress to "go big" to respond as Americans reel from the crisis.

Keeping paychecks flowing for idled workers as jobless claims skyrocket is a top priority for both the Republican and Democratic plans emerging from Congress.

Under the GOP leader's plan, the aid would be phased down at income thresholds of $75,000 for individuals and $150,000 per couple. Additionally, there would be $500 payments for each child.

But Democrats have their own proposals for ushering aid to Americans, and even McConnell's GOP senators panned Treasury Secretary Steven Mnuchin's idea of direct checks of $3,000 for a family of four -- preferring instead to use the federal dollars to keep workers who are asked to stay home on the business payrolls.

"What I want is income, not one check," said Sen. Lindsey Graham, R-S.C., summing up the views of some exiting a long, private meeting of GOP senators on Capitol Hill. One or two checks "makes no sense to me," he said.

"It's not a check. It's checks. It's not a payment, it's income," Graham said. "The best thing for us to do is create an income stream."

The swift-moving effort in an all-but-shuttered Capitol came as the first two lawmakers tested positive for the COVID-19 virus, others are self-isolating and the usually tradition-bound Congress faced calls to ease rules and allow remote voting.

Trump administration officials, including Mnuchin and economic adviser Larry Kudlow, are expected to return to Capitol Hill on Friday to launch bipartisan negotiations with Senate Democrats.

Vast government spending of untold sums is causing unease among GOP senators whose careers have been built on halting the flow of federal dollars and trying to halt rising debts.

But other Republicans said they had no choice but to provide a lifeline to Americans and small businesses.

"The government is causing this economic crisis by shutting down the country and so we're going to have to pay what it costs," said Sen. Lamar Alexander, R-Tenn., the chairman of the Health Committee.

The Treasury secretary said Thursday the checks would be direct-deposited into people's accounts under the plan the Trump administration has proposed to Congress.

The payments would be $1,000 per adult and $500 per child so that a family of two parents and two children would receive $3,000, Mnuchin told Fox Business Network. The goal is to get that money out in three weeks, he said.

"That's a lot of money for hard-working Americans," Mnuchin said.

Republicans want to have small businesses send paychecks to workers being forced to stay home --through government loans that would not have to be repaid -- to prevent employees being cast aside.

They also want to shore up industry. McConnell's plan would provide $208 billion in loans and loan guarantees to distressed sectors of the economy, including $50 billion for commercial airlines and $8 billion for air cargo carriers, and $150 billion for other eligible businesses, but those loans would have to be paid back.

At the same time, caring for the expected surge of sick Americans is a priority. Congress wants to ramp up production of medical supplies and rapidly erect temporary field hospitals under new authorities President Donald Trump invoked in the Defense Production Act.

"There is not a day to lose," Pelosi said in a statement. "We must put more testing, more protective equipment and more ventilators into the hands of our frontline workers immediately."

The centerpiece of the White House effort is $500 billion to start issuing direct payments to Americans, starting early next month.

How to spend that money, though, remains a key question.

The Treasury Department proposed two $250 billion cash infusions to individuals: a first set of checks issued starting April 6, with a second wave by mid-May. Officials have previously said the money is expected to be allocated by income level, to exclude the super-wealthy.

Direct payments would go to U.S. citizens only, and would be "tiered based on income level and family size." The two payments would be identical, with the second wave starting by May 18.

Meanwhile, industries of all kinds are lining up for help to avoid cratering the economy and devastating the home lives of their employees.

Groups representing hospitals, doctors and nurses are asking Congress for $100 billion to help the health care system respond to the challenge of COVID-19, which could involve providing treatment for tens of thousands of seriously ill people.

The total price tag is sure to grow beyond $1 trillion, lawmakers said.

Taken together, the administration plan promises half of the $1 trillion to families and individuals, with the other half used to prop up businesses and keep employees on payroll.

Trump has already signed into law a $100 billion-plus bill to boost testing for the coronavirus and guarantee paid sick leave for millions of workers hit by it. Earlier, Congress passed and Trump signed an initial $8.3 billion effort.

As Congress rushes to compile the sweeping economic rescue package, the biggest undertaking since the 2008 recession and financial crisis, in a matter of days, it also is considering its own way of doing business.

The Senate plans to remain in session until the emerging coronavirus bill passes, with weekend sessions possible. The House, which is on recess, won't be recalled until it's time to vote.

In the House, Reps. Mario Diaz-Balart, R-Fla., and Ben McAdams, D-Utah, released statements saying they had tested positive for COVID-19 -- the first two known cases in Congress. Several other lawmakers have cycled in and out of self-isolation after exposure to individuals who had later tested positive for the virus.

Majority Leader Steny Hoyer said he shares lawmakers' concerns about the potential risks of congregating in groups and is considering ways to "adjust our voting procedures" to follow the Center for Disease Control and Prevention's recommendations on social distancing.