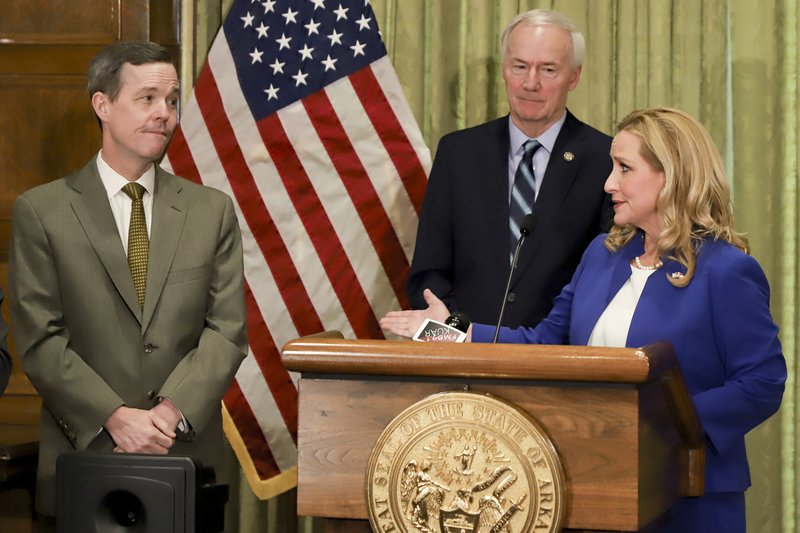 Arkansas Gov. Asa Hutchinson, center, looks on as Attorney General Leslie Rutledge speaks during a press conference to provide an update about the state's COVID-19 response Friday at the state capitol building in Little Rock. At left is Dr. Cam Patterson, chancellor of the University of Arkansas for Medical Sciences. The event was held at the Governor's conference room. - John Sykes Jr./The Arkansas Democrat-Gazette via AP

LITTLE ROCK -- Arkansas health officials on Friday said the number of coronavirus cases in the state has risen to 100 people, including 13 residents and staff of a Little Rock nursing home.

The state announced that the number of cases of COVID-19, the disease caused by the virus, rose from 62 Thursday to 100.

For most people, the virus causes only mild or moderate symptoms, such as fever and cough. For some, especially older adults and people with preexisting health problems, it can cause more severe illness, including pneumonia.

The vast majority of people recover from the virus. According to the World Health Organization, people with mild cases recover in about two weeks, while others could take three to six weeks to get well.

The new cases include nine residents and four staff members at the Briarwood Nursing Home and Rehab in Little Rock. The Health Department said a nursing home in Centerton and another in Pine Bluff each had a case.

"These are our most vulnerable population where we're most concerned," Dr. Nathaniel Smith, the state's health secretary, said at a news conference. Smith said the state is testing all of the residents and staff at Briarwood, a 120-person facility.

The state last week prohibited visitors at nursing homes and required anyone entering them to be screened.

Smith said the Pine Bluff nursing home resident was likely exposed to a physician who had been infected by the state's first COVID-19 patient. He said officials are not sure of the source of the cases at the other two nursing homes. He said the Little Rock facility had another resident test positive before the latest numbers were released.

Arkansas has closed its public schools until April 17 because of the outbreak, and prohibited sit-down service at bars and restaurants. A directive released Friday outlining Hutchinson's order to close gyms for non-essential functions said the order applies to other entertainment venues such as bowling alleys and trampoline parks.

Education Secretary Johnny Key said the state will seek to cancel its standardized tests for the year, following the lead of other states during the outbreak.

Attorney General Leslie Rutledge also said her office is directing an additional $3 million to a loan program the governor set up this week for some mid-sized businesses affected by the outbreak.