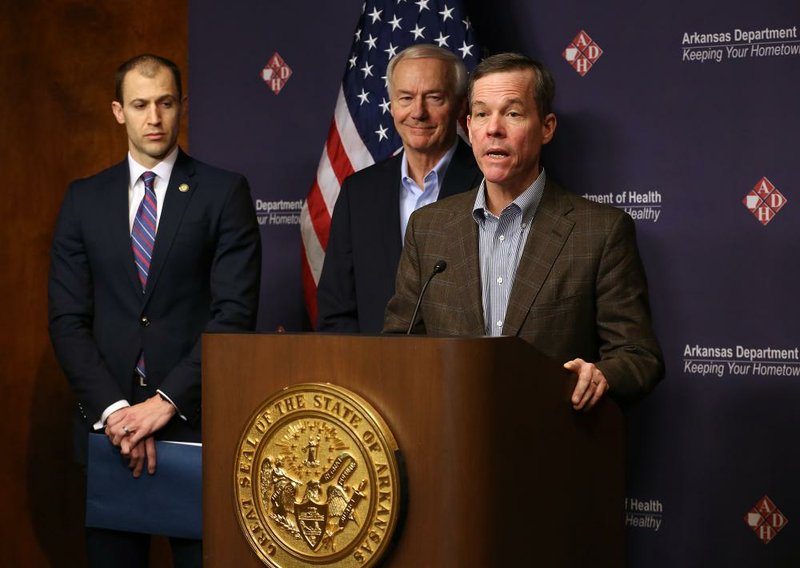 Cam Patterson, chancellor of University of Arkansas for Medical Science, talks about the dispersion of personal protection equipment to state hospitals as Gov. Asa Hutchinson and Arkansas Secretary of Commerce Mike Preston listen during a press conference on Sunday, March 22, 2020, at the Arkansas Department of Health in Little Rock. (Arkansas Democrat-Gazette/Thomas Metthe) - Photo by Thomas Metthe

LITTLE ROCK -- The number of confirmed COVID-19 cases in Arkansas rose by nearly 50, including more that 40 residents and staff of nursing homes, officials said Sunday

The state Department of Health reported that 165 people have tested positive for the illness caused by the coronavirus, up from 118 on Saturday.

Gov. Asa Hutchinson said at a news conference that this was the largest daily increase in diagnosed cases in the state and comes as testing is ramping up.

The vast majority of people who contract the virus recover within weeks. It causes only mild or moderate symptoms for most people, but it can lead to more severe illness, including pneumonia, especially in older adults and people with existing health problems.

Dr. Nathaniel Smith, secretary of the Arkansas Department of Health, said 19 people have been hospitalized with COVID-19 and six have been on a ventilator at various points. Forty-four residents and staff of nursing homes around the state have tested positive, he said, mostly at one Little Rock home.

Hutchinson said the state has committed $30 million toward obtaining personal protective equipment, including face masks. But the state received only a quarter of the supplies it requested from the federal government and is competing with other states and counties for the same limited supplies, he said.

Hutchinson said as many as 10,000 people have filed unemployment claims in recent days. He called the number unprecedented in his lifetime and said it is straining the state's ability to respond.

Print Headline: Confirmed COVID-19 cases in Arkansas up by nearly 50