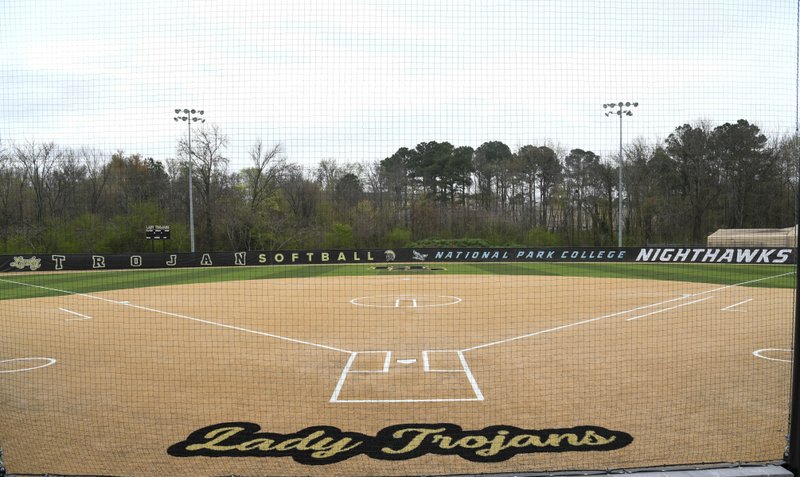 Hot Springs’ softball field remains unused on Monday after the Arkansas Activities Association mandated a “dead period” that has been extended to April 17. – Photo by Grace Brown of The Sentinel-Record.

Senior Summer Owens has had quite a ride during her four-year tenure with the Hot Springs softball team, but she continues to put in the work on a sport that she cherishes.

"Playing with Hot Springs is -- especially having the reputation of us not being so good -- it makes you push harder, but it can get challenging and stuff like that," she said. "We've been doing pretty good, but it can get frustrating with the coaches sometimes cause they may not see your full potential sometimes. ... The program's been getting better as a team, but I almost had a breaking point of quitting. ... I stuck to it 'cause it's my last year, and it's something I really love."

The Lady Trojans had managed to play six games before the dead period, including a Feb. 25 benefit game, as they took a 4-2 start to the season, the best start for the team in over six years.

Owens, who will be going to Southern Arkansas University in the fall, explained that she played as a young child but took a break until she made the decision to join the team her ninth grade year.

"I used to play softball as a little kid and then I stopped," she explained. "To me, it's a harder sport. A lot of people think it may be boring, but it's actually really fun. I just thought, I'm gonna try something different than playing volleyball and basketball."

With the Arkansas Activities Association mandating a "dead period" that keeps high school athletes from practicing or competing through April 17, Owens hopes that her personal training during the time away from school and her teammates will keep her skills honed.

"I was really upset because it's my last year and I wanted to make the best of it and really show out, but I can't do that anymore," she said. "I don't think it will as much if I keep practicing like I should. I'm still growing as a ball player, and I can never get enough practice."

Owens and her teammates are planning to keep their spirits up by possibly getting together and enjoying a mock practice.

"Everybody was pretty sad," Owens said of the team's reaction to the season stopping not long after it began. "We've been thinking about maybe even having a little practice in case we come back in time and can finish the season. We're probably gonna go to somebody's house, hit a couple balls."

She also noted that head coach Deana Franklin has advised the team on how to carry on while facilities are closed.

"They basically told us to stay healthy, be safe and always get some type of work in," she said. "Whatever you can do. Right now, I've been doing at home exercises and doing what I can inside the house. I'm still practicing and going through drills every other day to make sure I'm ready for when we come back."