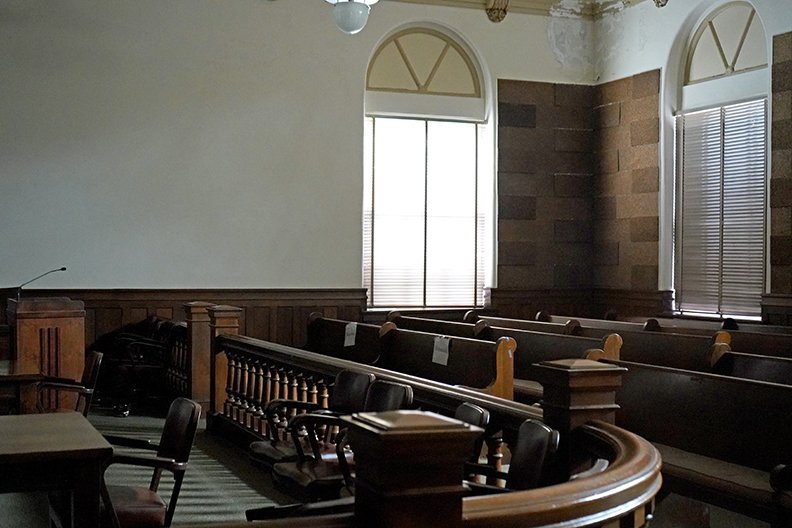 The courtroom of Garland County Circuit Court Division 1 Judge John Homer Wright sits empty Friday afternoon. Wright said essential court functions will continue despite the office being closed in light of coronavirus concerns, but cases have had to be rescheduled. - Photo by Cassidy Kendall of The Sentinel-Record

Officials for both Garland County District Court and Garland County Circuit Court Division 1 say that while essential functions will continue to operate despite the COVID-19 pandemic, all cases scheduled through April 17 have been continued, effective immediately.

"Unless the county judge closes the courthouse, the district court clerk's office will remain open from 8 a.m. to 4:30 p.m. Monday through Friday to answer calls and assist in re-scheduling your cases," a news release from district court said.

"Persons making monthly payments will still be able to make their regular scheduled payment in person. In order to avoid long lines and the risk of exposure to COVID-19 virus, we strongly encourage you to make payments online at https://pay.arcourts.gov," the release said. Payments by cashier's check or money order can be mailed to the Garland County Courts Building, 607 Ouachita Ave., Room 150, Hot Springs, 71901.

The jail docket for those persons arrested on new charges will continue to be held on Monday, Wednesday and Friday via video conference, but the courtroom will only be open to essential court personnel, the release said.

"Please consult the schedule before calling the court clerk's office as the clerk's office is handling a high number of calls during this time," the release said.

Court dates and case information are available at https://caseinfo.arcourts.gov.

An exception is made for defendants in custody whose cases will be addressed via video conference if possible, Judge John Homer Wright said in a news release, noting it will depend on "if this can be conducted without violating any of the protocols in place on that day."

All cases scheduled for Tuesday, March 31, (docket call day) will be rescheduled to Tuesday, May 26.

"All remaining cases currently scheduled through April 17 shall be rescheduled as expeditiously as possible," Wright said. "The court will contact attorneys to reschedule the cases as promptly as possible."