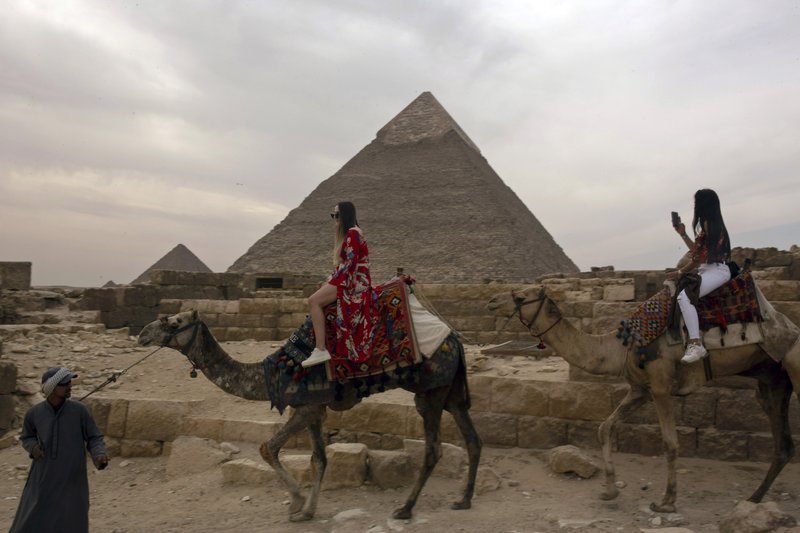 In this Tuesday, March 10, 2020, photo, two foreign women tourists ride camels at the Giza Pyramids near Cairo, Egypt. The country's prime minister announced at a news conference on Tuesday, March 24, 2020, a two-week, 7 p.m. to 6 a.m. curfew for its over 100 million people to slow the spread of the new coronavirus. The 11-hour curfew would go into effect Wednesday across the country and last for two weeks. (AP Photo/Maya Alleruzzo)

CAIRO -- The Middle East's most populous country, Egypt, as well as Syria, a country ravaged by nine years of war, will impose nightly curfews starting this week in an effort to stop the spread of the new coronavirus, their governments announced Tuesday,

The International Monetary Fund meanwhile warned that a shortage of medical supplies could affect the Mideast's poorest nations.

There are over 31,000 confirmed cases of the virus across the Mideast, the vast majority in the hard-hit nation of Iran. While most recover from the virus and the COVID-19 illness that it causes, bottoming crude oil prices have put additional strain on even the region's wealthiest countries. That in turn could affect their ability to spend on needed supplies as the virus challenges medical systems worldwide.

Already, countries have reacted by either urging or ordering hundreds of millions of people to stay home. Egypt, home to over 100 million alone, and Syria, became the latest on Tuesday.

Egyptian Prime Minister Moustafa Madbouly told a news conference that the 11-hour nationwide curfew from 7 p.m. until 6 a.m. would go into effect Wednesday, during which various forms of transportation will also come to a halt.

Madbouly announced the continued closure of airports, schools and universities until April 12. He said shops and malls will close Fridays and Saturdays, Egypt's weekend. Groceries, bakeries and pharmacies would be excluded from the closure order.

He said further restrictions would be implemented "according to developments," without elaborating.

President Abdel Fattah el-Sissi tweeted that he expects Egyptians to "respond positively to these measures, in order to protect the security and safety of our beloved Egypt,"

He warned that attempts to violate the announced measures would be confronted with "the utmost firmness and decisiveness."

In the Mediterranean city of Alexandria, dozens of people took to their balconies before dawn to pray for help against the virus, online videos showed. Other footage showed some three dozen people marching in a side street and chanting: "There is no God but Allah, and Muhammad is his Messenger."

Egypt's Interior Ministry, which oversees the police, said it had arrested "a number" of organizers of the Alexandria gathering.

El-Sissi's government has banned large gatherings, closed all its museums and archaeological sites including the famed Giza Pyramids and locked down tourist cities in the south and the Red Sea. Religious authorities have closed churches and mosques.

In Syria, where the healthcare system has been decimated by nearly a decade of civil war, the government said a 12-hour curfew beginning at 6 p.m. (1600 GMT) will go into effect Wednesday. State news agency SANA did not say how long the nighttime curfew would continue, but it appeared to be open-ended.

Syria has reported only one case of the coronavirus so far, but strict measures have been taken in government-held areas including halting commercial flights, closing borders with neighboring countries and shutting down restaurants and public transportation.

Even before the curfew was announced, lines had formed outside grocery stores, banks and gas stations across the Syrian capital, Damascus, as people braced for wider closures.

The IMF, which traditionally has told governments to implement greater austerity measures, was urging Mideast governments to offer temporary tax relief and cash transfers. It warned a lack of medical supplies could hurt Iraq, Sudan and Yemen if it leads to a surge in prices.

"Given the large numbers of people employed in the service sector, there will be wide reverberations if unemployment rises and wages and remittances fall," the IMF's director for the Middle East, Jihad Azour, said in statement.

In the impoverished Gaza Strip, Hamas-run religious authorities announced all mosques will be shut down for two weeks starting Wednesday. Schools had already closed.

Donations from Qatar of food, electric appliances, clothes, furniture and fuel arrived Tuesday at temporary quarantine centers in Gaza. It's part of a $150 million boost from Qatar to fight the virus announced Sunday.

An Israeli-Egyptian blockade of Gaza, in place since the militant group took power in 2007, has slowed the arrival of the new virus to the densely populated Palestinian enclave.

The arrival of the pandemic in Syria, as well as the impoverished Gaza Strip, has raised concerns the virus could run rampant in some of the most vulnerable areas in the Middle East. War-torn Libya and Yemen, which have yet to report any cases, are also a source of concern.

The worst outbreak in the Mideast is unfolding in Iran, where authorities reported another 122 deaths on Tuesday, bringing the total number of fatalities to more than 1,900 amid more than 24,800 confirmed cases. The dead included the mother-in-law of the son of Supreme Leader Ayatollah Ali Khamenei, the state-run IRNA news agency said Monday.

Health Ministry spokesman Kianoush Jahanpour warned the public that infections will likely rise further, as Iran now has more ability to test and screen suspected cases. The ministry has launched a website for the public to report if they suspect they have the virus, so medical staff can come administer tests.

The sultanate of Oman meanwhile announced it would halt all passenger flights beginning Sunday, although cargo flights would continue.

Saudi Arabia announced Tuesday that its virus cases jumped from 562 to 767, and included its first death.