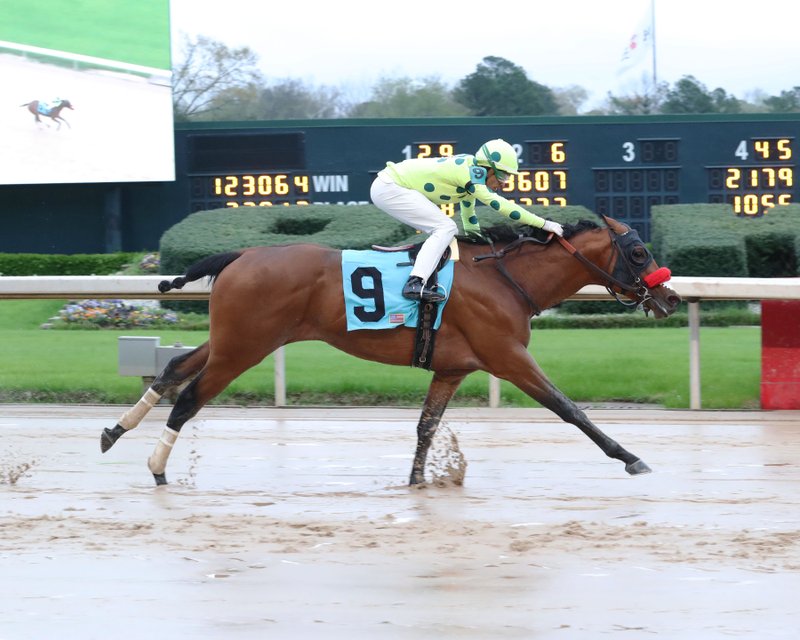 Big Return, under jockey Ramon Vazquez, makes his way across the line to win Sunday's eighth race at Oaklawn Park. The 3-year-old paid $125.20 to win, the highest payout at Oaklawn in over a year. - Photo courtesy of Coady Photography.

Big Returns paid a whopping $125.20 to win the first-level allowance/optional claiming six-furlong sprint on a muddy track under Ramon Vazquez. The 3-year-old was previously based in southern California with O'Neill and owner William R. Peeples, and he represents the highest-priced winner at the track since Super Steed paid $126.60 in the Grade 3 $500,000 Southwest Stakes on Feb. 18, 2019.

The two-time Kentucky Derby-winning trainer admitted that while he likely had a $125 winner in the past, "it's been a while."

"I'm embarrassed to say I didn't bet a dime on him," O'Neill said of his 2,479th career winner. "We had two in there. The horse that had just won, Liam's Pride, looked like he was, obviously, in better form. I think Big Returns, he was training well and had a great, cozy outside post. That all seemed to work in his favor."

Liam's Pride, who finished just out of the money in fourth, was the 6-1 third choice in the 10-horse field and was coming off a March 7 maiden special weights victory. Big Returns had his first start after a sixth-place finish Feb. 7 in the $84,000 Baffle Stakes, a 5 1/2-furlong turf sprint at Santa Anita, and he had three published workouts at Oaklawn prior to his Arkansas debut, including a five-furlong move out of the gate in 1:00.40 on March 10.

"Man, he ran huge," O'Neill said. "I've just got to give a big thanks to Mr. Bill Peeples. He's the one who was kind enough when I mentioned about sending him to Oaklawn. He said, 'Let's do it.' We're having some trouble getting dirt sprints to fill at Santa Anita, so I'm glad we did. He's a nice, nice colt."

The California-bred son of Mr. Big picked up his third win in five lifetime starts to bring his earnings to $131,200. The bay colt was disqualified for stretch interference in the $100,000 Graduation Stakes for state-breds at Del Mar on Aug. 2 despite finishing first.

Big Returns was running for an $80,000 claiming tag Sunday, so O'Neill said he believes the colt could come back in the same condition. He will also be considered for the $100,000 Bachelor Stakes on April 25, said O'Neill, who took second in last year's six-furlong race with Landeskog.

"It's been awesome," O'Neill said. "My assistant, Danny Robles, has done a wonderful job of keeping everything under control there. Just very blessed to have this opportunity and just proud of Oaklawn to stay running through this, hopefully, short-lived virus thing we've got going on."

Trainer Robertino Diodoro said that the unbeaten Lexi On the Move will make her stakes debut on April 4 in the $100,000 Purple Martin for 3-year-old filly sprinters.

The bay daughter of Fast Anna races for Texas Larry Hirsch (Highlander Training Center) and is 2 for 2 after taking her Feb. 15 career debut.

"From Day 1, we thought she could run, as long as we could get her mentally right," Diodoro said. "That was her problem at the farm, at the training center, at Highlander. She's really come around. The thing that I'm excited about is she's very immature. We haven't gotten to the bottom of her. I think there's a lot of room to improve. That's going to come with maturity. We're pretty excited about her."

Hirsch purchased Lexi On the Move for $160,000 at the Ocala Breeders' Sales June 2-Year-Olds and Horses of Racing Age Sale.

Others pointing at the Purple Martin are Ring Leader for trainer Mac Robertson and Frank's Rockette, trained by Hall of Famer Bill Mott. Ring Leader won the $125,000 Dixie Belle on Feb. 15, and Frank's Rockette has never finished worse than second in five career starts for breeder/owner Frank Fletcher of North Little Rock. Frank's Rockette was a seven-length winner of the $75,000 Any Limit Stakes on Feb. 22 at Gulfstream Park, her 3-year-old debut.