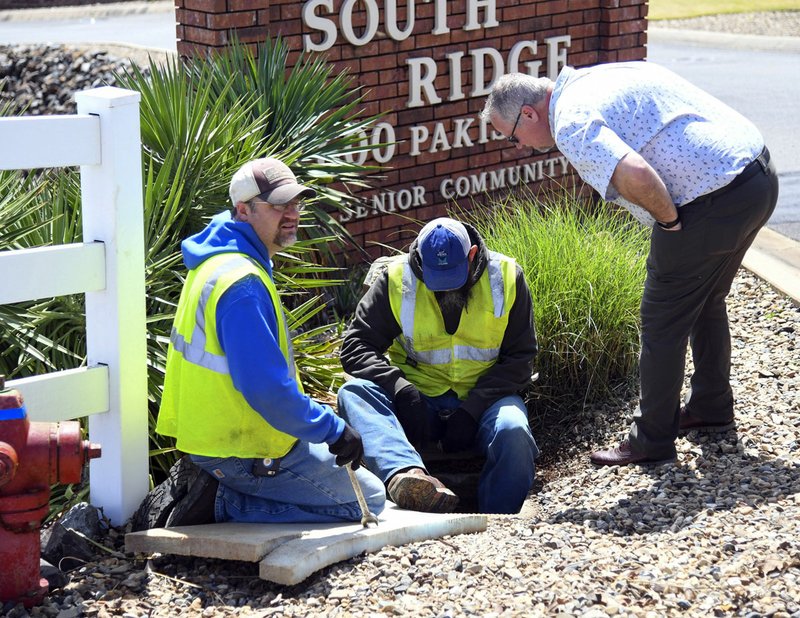 City utility employees Josh Tillery, left, and Roger Kalas, show their work on a water main to Utilities Director Monty Ledbetter in the 600 block of Pakis Road on Wednesday. The city has suspended utility disconnections and penalties for late payments during the COVID-19 emergency. - Photo by Grace Brown of The Sentinel-Record

With hygiene fundamental to slowing the spread of COVID-19, the city of Hot Springs has suspended utility disconnections and penalties for late payments.

"One of the things people need most is water to practice good hygiene and wash their hands," City Manager Bill Burrough said Wednesday. "We understand there's a tremendous amount of people impacted by COVID-19 mitigation efforts. Employees throughout the city have been laid off. We're looking for ways to minimize that impact."

The city also extended deadlines for payment of February alcohol taxes, moving the March 20 deadline to April 20 and waiving penalty fees for late payments, and business licensing fees due March 31. The latter won't be due until April 30. More information on business licensing is available by calling 321-6826.

Per city code, a 10% tax is levied on gross sales of alcoholic beverages. Private clubs are assessed a 5% tax. Late payments are assessed a 25% penalty. The deadline for payment of March taxes will be addressed at a later date, the city said.

Many restaurants and bars have suspended or limited operations since the Arkansas Department of Health prohibited on-premise dining last week. The directive limits service to carryout, drive-through and delivery.

Burrough said the city is looking at payment plans for utility customers who accrue outstanding balances during the COVID-19 interruption. Payment forgiveness is not an option, as ratepayer revenue secures debt the city has issued for water and wastewater system improvements. The city floated $20 million in 2018 for water system improvements, including engineering and design fees for the $100 million Lake Ouachita water supply project.

"We just can't write off what ratepayers owe, because it does affect other ratepayers as well as the debt we have," he said.

The city has no authority to grant forbearance for businesses collecting the 1.5% sales tax supporting the general, police and fire funds. Businesses remit the tax to the state revenue agency, which hasn't announced a deadline extension.

"(Monday) Gov. (Asa) Hutchinson announced the deadline to file individual income taxes would be extended," Scott Hardin, director of communications for Department of Finance and Administration, said in an email. "While a variety of initiatives have been announced to support businesses, sales tax due dates remain unchanged."

Garland County Department of Emergency Management Director Bo Robertson said Wednesday he expects to collect the county's allotment of the second allocation from the Strategic National Stockpile of personal protective equipment in the next few days.

The governor announced Tuesday that the second allocation has arrived at the Arkansas Department of Emergency Management, providing what he said at current usage rates is a 60-day supply of protective equipment for the state's health care workers.

Robertson said he picked up the county's allotment from the initial allocation last weekend.

He said the county's SNS allotments are going to first responders, primarily LifeNet ambulance service. The state's regional hospital coalitions are working with the Department of Health to supply hospitals, he said, noting that National Park College's nursing program donated all of its supplies to local hospitals.

"They did an inventory of what the nursing program had as far as supplies and donated it to our local hospitals," Robertson said. "It was quite a bit and depleted what they had."

Robertson is tracking all personal protective equipment coming into the county. The emergency declaration County Judge Darryl Mahoney issued earlier this month qualifies the county and its incorporated areas for a 75% reimbursement from the Federal Emergency Management Agency for expenses related to the COVID-19 response.