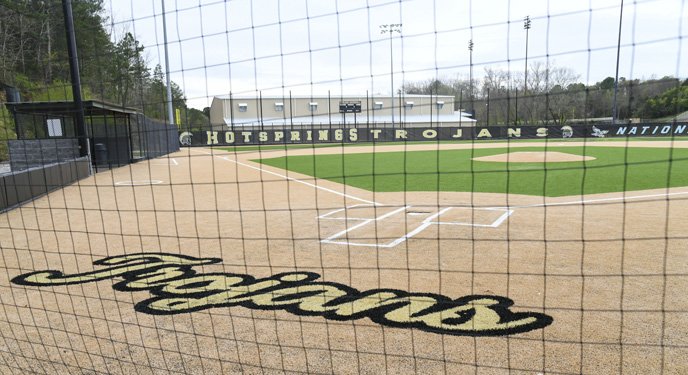 The baseball field at Hot Springs High School is shown on Monday. Senior Trojan baseball players got to play a handful of games on their new turf field before the Arkansas Activities Association called sports to a halt due to the coronavirus. – Photo by Grace Brown of The Sentinel-Record.

EDITOR'S NOTE: This is part of a continuing series of articles on how Garland County senior baseball players are reacting to the mandatory "dead period" implemented by the Arkansas Activities Association.

Hot Springs managed to accumulate a 6-1 record to open its baseball season before it was called to an abrupt halt when the Arkansas Activities Association mandate a "dead period" starting March 14.

Senior outfielder Eli Spainhour said that he and his teammates were "shocked" by the news.

"We're all just really upset, and this is the best we've looked in a really long time," he said. "We were feeling really upbeat about the rest of the season and ready to give it our all, so when they told us we're gonna be out of school for a week and then come back after spring break, we thought that's not too bad. Then the governor said we're not returning to school until April 20, I was like 'Holy cow.' That's almost half of our season gone. We were really shocked and just upset we were gonna miss all those games and not get the time back that's being taken from us.

"It could not have come at any worse of a time. It's just really tragic to be working towards everything that we've worked towards our senior year ... and just to have it cut so short."

Utility player John Jones said the "2020 squad was the best team I've played with" in his three years with the Trojans.

"We looked really promising in our games and especially for us seniors, this was our last chance to go prove something," he said. "We were chasing a 10-win season and we couldn't even get through it. For people like me and others -- I've been playing baseball since I was like 4 years old -- this really hit me hard. I found out I might not be able to play ever again. It's taking away from these freshmen that we were coaching, and it's really gonna be hard on them 'cause they didn't get that whole freshmen year to develop. It's really bad on all of us."

Jones, who has plans for attending National Park this fall, is concerned about how the suspension could affect scholarships.

"I definitely think it's gonna hurt it a lot because now if you cancel the season, it doesn't give me or any other seniors the chance for coach [Brandon] Hargrove from National Park or anywhere else come look at us and see how we play," he explained. "They can't come look at us. They can't come talk to us or scout us in any way."

"It really sucks, and this is what I've grown up working for and waiting for -- traveling around the U.S. for travel ball," infielder/pitcher Sebastian Love said. "I've been working really hard, and I started off with a .500 batting average, so I was really looking to showing out and getting a scholarship, but it may not happen."

While the break is a disadvantage, the players are also looking at some of the positives that could come from the situation.

"To a certain extent, it could be an advantage but I also feel like since the school's completely locked up, we can't go practice or get better," said Spainhour. "We're just kind of stuck at where we were at before we left. Not that it was a bad place but it's definitely not a place where we'd get any better. ... Yes, the not practicing is nice -- being able to rest and relax, but it's a grind, and you gotta stay at that grind everyday."

Jones noted that the competition in the 5A South is some of the toughest in the state, and the time off will definitely require the players to work harder to get back up to speed.

"If we're off for two months, it's gonna be hard for us to just pick up a bat and hit a ball that's coming at us at 80 miles an hour because they say hitting a baseball is the hardest thing to do in any sport, so it's already difficult," he said. "The ball's coming at us at different velocities and different ways. It'll be hard for us to pick it back up without repetition.

"Our conference is stacked. We've got lots of Division 1 talent, and most of the pitchers in our conference throw 75 miles an hour or up. ... It'll take time for everybody to get back in the habit of coming and playing baseball since we're gonna be off for so long. Honestly, I'd give us about three or four days and I think we'd be good to go."

Spainhour is keeping up with his diet and his workouts during the break to make sure he is as game-ready as possible for when the team is able to return.

"I have a bench rack at my house, and I just work out and I run," he said. "I have a treadmill at my house. Everything I normally would do I keep doing except I can't go to the gym or anything. ... I continue to drink plenty of water and eat good."

Love has continued to keep a workout routine while keeping a positive attitude about the hiatus as a whole.

"I've been going to a private facility to stay in the swing of things, keep upbeat, and trying not to see the downfall of everything that's going on," he said. "Mainly just going to the cage and having fun -- swinging the bat, hitting the ball, pitching machine. Normal things that you would do."

The break has helped Spainhour appreciate the sport more than ever.

"Not being able to play baseball is also making me realize just how much I love the game," he said. "It's also shown me I'm not gonna completely miss out on baseball the rest of my life, but I'm still gonna get to watch games and go to games and maybe one day if I realized I wanted to play, I could still go back and play."

"If [the season] was resuming, I'd go play tomorrow," he continued. "If I got a text saying that there's a game scheduled tomorrow, I'd be there ready to go."