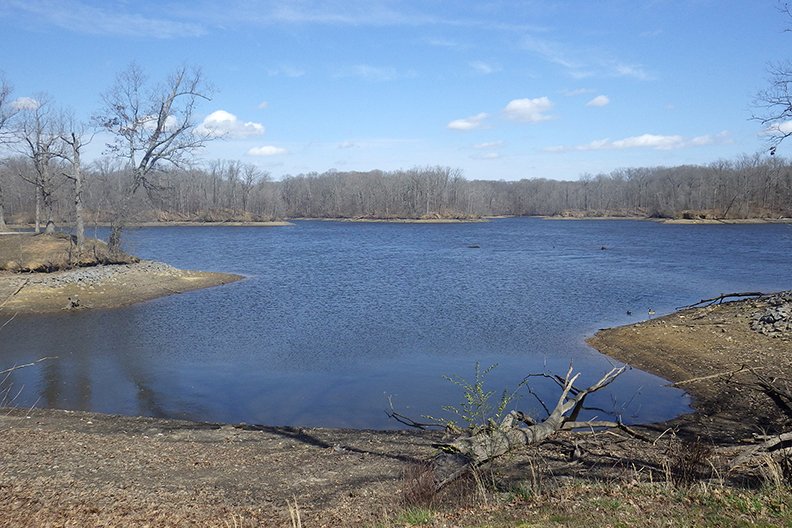 Two lakes are nestled within the perimeters of Mississippi River State Park, offering fishing, camping and wildlife watching opportunities. - Photo by Corbet Deary of The Sentinel-Record

My bride and I recently began planning a day trip, with intentions of grabbing a few outdoor destinations along the way. That in mind, I began to ponder which region of the state I had not visited within the past year or two.

Of course, the Ouachitas gets its fair share of coverage, as it is right here in our backyard. Although there are a plethora of destinations in the Ozarks that I haven't visited in a while, and others I have yet to see, I am intentionally saving the northern section of the state for the spring and early summer months.

We had kicked around in the western extremities of the state just a few months back. And again, the spots I failed to visit during our most recent excursions are spots where I hope to return during the upcoming season.

It has not been that long ago when we made a journey to south Arkansas. And to be honest, one can pretty well cover a majority of the outdoor destinations there in a day.

I was truly having trouble deciding which direction I wanted to travel. But then I began tossing around extreme eastern Arkansas. Although there is not an overabundance of destinations along the Mississippi River where I wanted to visit, there was one spot in particular that did strike an interest.

We had stopped at Mississippi River State Park a few years ago. However, the weather was far from friendly. Drizzle was falling from a dreary sky, and a frigid wind was blasting from the north. In turn, we stopped in and chewed the fat with the folks at the desk for a while and headed back to Hot Springs.

Although I didn't have an opportunity to get out and kick around at the facility, I was fairly certain that this was a destination that had plenty to offer. That in mind, I made a mental note to return again, hopefully on a warm and sunny day.

Well, the forecast suggested that pretty weather lurked ahead. That in mind, the decision had been made. We crawled out of the sack early the following morning and were headed in an eastward direction shortly after the rising sun deemed it a new day.

We had a 2.5-hour drive ahead of us. There would be a number of turns along the way. However, the destination was not hard to find.

From Hot Springs we took Highway 70 east to Interstate 30 and remained in an eastward direction upon hitting the interstate.

Traveling for 15 miles we then took a slight left onto Highway 79, where we would remain for 11 miles prior to continuing straight on West Chestnut Street. Traveling three-tenths of a mile, we then took a right onto Er Gaines Street. Going another half-mile, we turned left onto West Dr. Martin Luther King Jr Drive. We veered to the left on to Highway 44 after 2.1 miles and made a left seven-tenths of a mile later at the entrance to the parking area.

We stopped in and checked out the interpretive stations at the visitor center upon our arrival. But the outdoors were calling. So we headed outside and embarked upon a walk along a nearby trail that is accessible from the parking area.

The half-mile path is wide and makes a level journey alongside a pond. Of course, the spring season had yet to arrive. In turn, very few plant species had emerged from the fertile soil during our visit. But I would suspect an array of plants would be making a showing in the weeks to come.

Judging from a wad of fishing line dangling high in a tree, it was evident that fishing is allowed in the small reservoir. I suppose one might be able to coax a few native fish into biting from this particular spot. But there were other water sources lurking within the perimeters of the park that would likely prove far more productive.

Located a few miles down the road, Bear Creek Lake was far larger than was this small pond. In fact, the impoundment was large enough to accommodate three campgrounds.

Beech Point Campground is situated on a wooded point, lending to impressive views of the lake and ample opportunities to view water-loving birds going about their everyday rituals.

Two docks are located at the campground, as are 17 campsites. Fourteen of the sites provide water, electric and sewer hookups, while the remaining three sites are designed with primitive camping in mind. A barrier-free bath house is also located on site.

Lone Pine Campground is far more primitive. In fact, the 14 sites located at this designated area do not offer any type of hookups. And those who stay at Lone Pine must be prepared to use vaulted toilets.

Maple Flats Campground is also primitive and only offers a vaulted toilet. However, there are those out there who are most interested in getting back to the very basics during their outdoor adventures. That being said, these sites are also popular throughout the warmer months of the year.

Storm Creek Lake is also nestled within the perimeters of the park. However, there is only one campground situated on the banks of this particular reservoir. All 12 of the sites at this location are designed with primitive camping in mind. And again, this designated area is equipped with a vaulted toilet.

Regardless of the perks one prefers during their camping excursions, both of these lakes appeared to provide ample habitat and to be large enough for native fish to thrive. And although I didn't get an opportunity to cast into these waters during our most recent visit, I do plan to carry my rod, reel and kayak along with me, when I return to ride a nearby biking trail that we happened upon during our excursion.

Of course, staying overnight is not a requirement for utilizing these two bodies of water. In fact, picnic tables are available at some of the camping areas perched on their shorelines.

Designated swimming areas are also situated along the edges of both Bear Creek and Storm Creek Lakes. And I would suspect that these particular areas are very popular during the warmer months of the year.

Hiking enthusiasts might also appreciate the fact that three other hiking trails are available at the state park, ranging from one-quarter to 4 miles in length. And although I failed to experience jaunts along these designated routes during our most recent visit, I hope to give them a try during my next outing.

Yep, the Mississippi River State Park is a destination that has plenty to offer. And I plan to spend an extra day or two getting better acquainted with the facility and its waters in the near future.