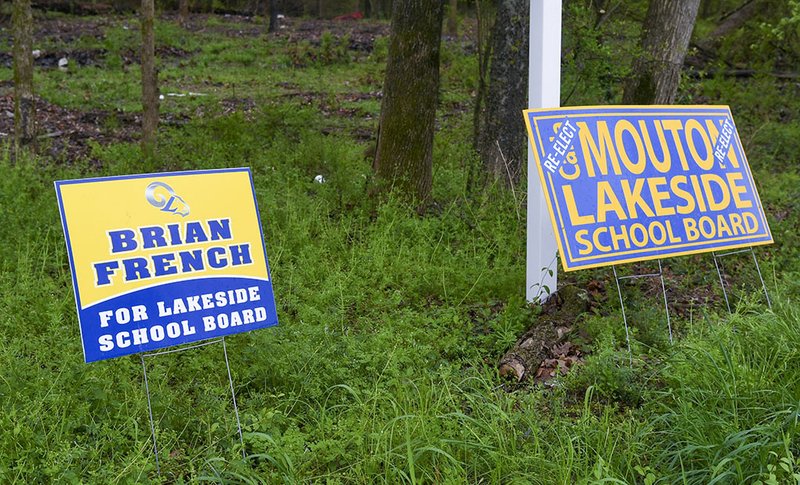 The Sentinel-Record/Grace Brown RUNOFF: Campaign signs for the candidates in today's runoff election for the Lakeside School Board are displayed Monday in the 2800 block of Malvern Avenue.

Absentee voting will weigh heavily on the outcome of today's runoff for Position 4 on the Lakeside School Board, officials and the two candidates said Monday.

COVID-19 advisories and directives admonishing the public not to gather in groups of more than 10 are playing out against the backdrop of today's election, discouraging voters from going to the polls for the runoff between incumbent Carla Mouton and challenger Brian French.

Mouton and French were the top performers in the four candidate March 3 election. Mouton won a 40.50% plurality of the 4,165 votes, and French polled 25.24% of the vote to qualify for today's runoff.

Both candidates said Monday that social distancing has limited their campaigning to phone calls, text messages and social media. French said voter enthusiasm is key, as only the most enthusiastic are likely to cast ballots amid the precautions the public is being advised to heed.

"It's really about who's motivated to go out and vote," French, a mortgage banker and president and commissioner of the Lakeside Youth Football Association, said. "Or who's motivated to print out an (absentee ballot) application, send it in, get the ballot and then mail it back. It's more work for the voters, and it becomes a question of whose voters are more motivated."

Mouton, who taught history, geography and economics for more than 20 years at Lakeside High School, said she and her husband have provided supporters with absentee ballot applications.

The governor earlier this month suspended the law limiting absentee voting eligibility to those unavoidably absent or unable to vote in person or those with illnesses or disabilities, extending qualification to all registered voters participating in today's runoff elections.

Election Commission Chairman Gene Haley said 105 people had cast ballots at the Election Commission Building on Ouachita Avenue as of Monday morning. He said to limit poll workers' exposure to potential infection the same six have been at election headquarters during the five days of early voting that started March 24.

Voting machines have been disinfected after each use, he said, and, according to the emergency declaration the commission issued earlier this month, voters are required to maintain a distance of 6 feet from each other and use a separate door to exit the voting area.

Voters can see if they're eligible by clicking the "Check My Voter Registration" tab on the election commission website, http://garlandcountyvote.org.

Mouton said she's running for a third term to help sustain momentum voters initiated through the passage of a millage increase in 2018. Their endorsement financed a build out that includes a performing arts center and new junior high school building. Reading and wellness programs are providing students the fundamentals for success, she said. Ensuring policies are in place to sustain and strengthen those programs and others are her motivation.

"There's so many things still going on," she said. "I would like to see the construction program through. We have this amazing, scientifically-based reading program. The school started a clinic in association with CHI St. Vincent. There's so many things going on that I want t0 see through. I have a very inside knowledge of these programs because we started them.

"It's still my passion. I may not be teaching on the same level I used to, but I still feel like I'm teaching."

French, who has two children enrolled in the district, said he got "addicted to helping kids" as a coach in the district's youth football association. It motivated him to seek a larger role, one that ensures every student views the school as a "safe haven."

Building on the school's anti-bullying hotline would help provide that reassurance, he said.

"I think we have to go even further to make sure every single kid there knows we've got their back," French said. "They need to know there's somebody they can talk to, and that there's going to be no retribution. It's something I would be willing to take on personally."

Promoting a vocational path for students who aren't interested in going to college is also important, he said, noting that schools and parents have become overly invested in college as the sole path for career development.

"We need to make sure avenues are open for all of our students and set up a curriculum for students who don't want to go to college or for those that college might not be the right fit," he said. "It needs to be promoted so kids know they can make six figures as an electrician.

"I feel we've done a poor job promoting that. Maybe there could be an apprenticeship program for kids in high school. They could get their license by the time they graduate and start operating."