A Writer at Heart 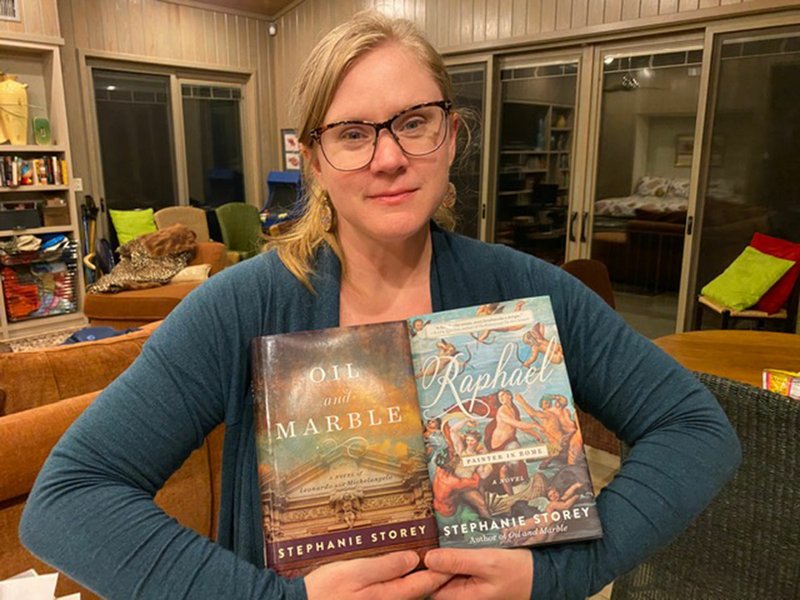 Sitting in her parent's kitchen overlooking Lake Hamilton, 7-year-old Stephanie Storey put pencil to paper and coined her first story titled "Horty the Hog Goes to School." The rest is history, as the Lakeside alumna has gone on to produce in California over the years debuting her first novel "Oil and Marble" in 2016, featured on Hudson Booksellers Best Books of 2016, and her second, "Raphael, Painter in Rome" hit the shelves last month.

"We're Razorbacks, so of course the protagonist had to be a little pig," she laughed. "I illustrated him and did a whole series of them -- Horty the hog went to school, he went to the dentist, he went skiing. He did all kinds of things. I have written every day since I was seven. Every single day, including on my wedding day. I got up in the morning before the dress went on and wrote just a little bit of fiction."

While earning a fine arts degree, a mixture of studio art and art history, from Vanderbilt University in Nashville, Storey seized the chance to spend a semester at the University of Pisa in Italy where she fell in love with Michelangelo and the Italian Rennaisance.

"I went to go get my Ph.D. in art history in the Italian Rennaisance, and I studied under one of the top Michelangelo specialists in the world -- William Wallace at Washington University but I did not last in that Ph.D. program," she said. "I figured out that academics don't like it when you make stuff up so I left to go write fiction and went to Emerson College up in Boston to go get my MFA in creative writing.

"My whole life growing up, everybody had always said 'You can't make a living as a writer. That's not really a job. You can't do that. You're gonna have to go find a real job.' Sure enough, I get to graduate from school and at graduate school they were telling me it's really tough to make a living as an author, even though that's what I wanted to do since I was seven."

An L.A.-based program through Emerson opened the doors for Storey to take her craft to the Pacific by way of internships before officially making the move after graduating. Her first position was on "Exhale" with Candice Bergen in 2000, as she moved up the totem pole to producer.

For Storey, Hollywood was her "Plan B." Even with credits such as "The Tavis Smiley Show" and the Emmy-nominated show "The Writer's Room" on her resume, Storey truly desired a career as a novelist just as the idea for her first book came to fruition.

"I was producing five nights a week of television for hosts interviewing all the most famous people you could think of," she said. "Think of a famous person. I've produced an interview with them. ... I wanted to be a novelist. That's what I wanted to do. I was just sort of cooling my heels in L.A. working in television until I could figure out how to be a novelist. I would get up in the mornings, and I would write in the mornings. I would write in the afternoons. I would write on weekends."

In 2006, Storey and her husband went to Italy, and "I told him the story of my first novel. 'Did you know that in Florence, Leonardo and Michelangelo lived and worked in this town? They hated each other while they were living and working in Florence those years when Leonardo da Vinci was painting the Mona Lisa and Michelangelo was carving the David.'

"So I started writing it as a screenplay. I've always been a fiction writer and I was just afraid that I wasn't good enough to write that story as a novel. I just had one of those self-doubt things. Then I had one of those moments where you realize life is really short and it's not gonna last forever. I said, if there's one thing I wanna do if life is gonna be short is to write the story as a novel. So that moment was in 2011, and 'Oil and Marble' came out in 2016."

With "Raphael, Painter in Rome," Storey decided to chronicle the novel through Raphael's point of view as she explained the tale is often accounted through Michelangelo's.

"It is in the first person, so it's Raphael sitting down to tell you his version of events," said Storey. "This story revolves around Michelangelo painting the Sistine ceiling down in Rome at the Vatican, but that story's always told through Michelangelo's eyes because Michelangelo was sort of the victor and the hero. ... I wanted to tell it through his rival eyes during those years, which is Raphael. So while Michelangelo's painting the Sistine ceiling, Raphael's just down the hall decorating the pope's private apartment. ... I sort of got to slip in his skin and see that world through his eyes."

But what draws Storey to the historical genre?

"I'm always interested in learning something while reading, but let me have it in a really good story where I get to be swept up in the characters and the people," she explained. "Not to mention I've been obsessed with Michelangelo since I was 19 years old. That's where it started. ... I think art history can teach us a lot about the world, how we see humanity, and how getting into stories of history can teach us about our current lives. It drives me nuts when people put artists up on pedestals. We treat them like they're untouchable, and they're not. They're just like you and I. They faced the same struggles. They had the same battles. Their families didn't support them, or they didn't have enough money, or they doubted themselves. ... That's what draws me to writing about the great artists."

With a book tour that has been put on pause due to COVID-19 affecting the population worldwide, Storey hopes that people who pick up her novel realize they don't have to be consumed by challenges, but that they can try "in their own way to keep bending the world toward beauty."

"Right now, I'm not supposed to be sitting in Hot Springs," she said. "I was supposed to be doing live events telling people about Raphael. And I'm not. That's difficult, and that's the small scale of what's difficult for people. This is a challenging time for so many people losing jobs and being sick. The challenges of this moment are so overwhelming, but the thing about Raphael is -- what I'm hoping people take away from ('Raphael, Painter in Rome') is that he had a really tough life. He was orphaned at age 11. His mom and sister died when he was eight, and his dad died when he was 11. The Italian Peninsula was besieged by war and disease during his lifetime. He falls in love with a woman, who most likely for political and social reasons he can't marry, so he never has a family again. He died at age 37. He easily could have fallen into anger and sadness and frustration and anxiety. He could have been consumed by all of that, and instead he turned away from it, and he was consumed by beauty."

With her book release on April 7, Storey was meant to be at her favorite bookstore in New York City the night of but had to adapt for a digital launch, and is now focusing on maintaining an online presence through her YouTube channel, Team Storey, where she's interviewing fellow authors and helping promote their work. She will also be uploading readings of her book. For more information on Stephanie, her books, and future events, go to stephaniestorey.com.

"This book took me five years to write," she said. "You're supposed to go out and celebrate with your friends and all your fans, and everybody who read 'Oil and Marble' wants to come out and read the new book and you want to sign them. You want to give talks. It's one of the best ways on the planet to get readers excited about your work. One of the best ways to get people excited about it is to give them a speech, go to an event, go shake their hand, and sign their book. None of which I can do right now. It is sad and disappointing, and yet I've worked in Hollywood for 20 years, so I don't have an attitude other than the show must go on."

Print Headline: A Writer at Heart